Everyone associated with the Westland Lynx helicopter describe it as agile, dynamic, fast and highly manoeuvrable. It is considered the sports car of its generation, but sadly, in Royal Navy service, the Lynx will race no more following the decision to withdraw the final seven aircraft from service on March 31, just three weeks after the final embarked Lynx Flight returned to its home base at Royal Naval Air Station Yeovilton in Somerset. The Lynx has served the Fleet Air Arm for 41 years at sea in some of the toughest environments on earth. It was no challenge to find Royal Navy personnel willing to talk about its service history and operations. 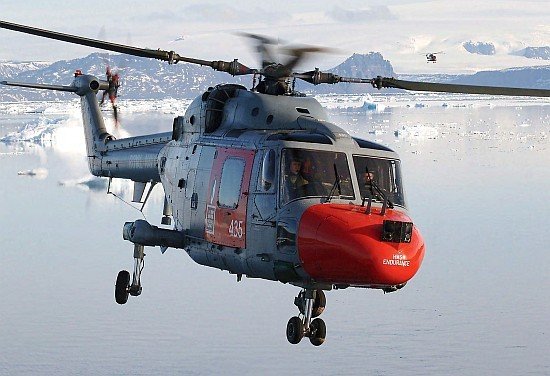 Both of HMS Endurance’s Lynx HAS2ICE helicopters over Mare Harbour in the Falkland Islands during February 2007.
LA(Phot) Whybrow/Royal Navy