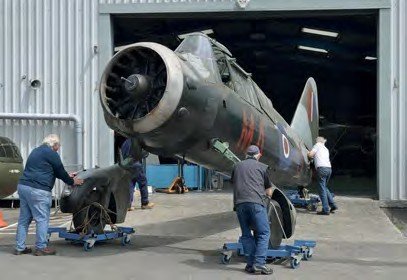 The very convincing Lysander replica that starred in the 2016 film Allied, shortly after its arrival at the Tangmere Military Aviation Museum on 16 June. DAVID COXON

On 16 June the Westland Lysander III (SD) replica used in the 2016 feature film Allied, starring Brad Pitt, arrived at the Tangmere Military Aviation Museum, where it will represent the special duties ‘Lizzies’ flown by No 161 Squadron from Tangmere on spy pick-up missions during the war.

The Lysander was built by Gate Guards UK in Cornwall, and after filming was sold to a private owner who put it up for sale. During May, engineers from the museum examined the machine, after which the trustees agreed to the purchase, with the aid of a contribution from the museum’s Society of Friends. It will be reassembled and placed on display in Tangmere’s Merston aircraft hall in July. The replica currently wears the codes MA-J, but these will soon be changed to MA-E in tribute to 161 pilot Fg Off Jimmy ‘Mac’ McCairns, who during 1943 flew 25 successful pick-up operations from Tangmere in his Lysander, and was awarded three Distinguished Flying Crosses over a 13-month period.

Jimmy McCairns’ son Chris visited the museum to see the Lysander on 26 June, and between 21 July-2 September the museum is holding an exhibition on Tangmere and the Special Operations Executive with the replica Lysander taking centre stage. McCairns survived the war, only to be killed in the crash of Mosquito NF30 NT423 following engine failure at low level near RAF Finningley, South Yorkshire on 13 June 1948.