Three new additions to the Mid-America Flight Museum (MAFM) fleet arrived at Mount Pleasant Regional Airport in north-eastern Texas during September, the most significant acquisition being Pearl Harbor veteran Grumman J2F-4 Duck BuNo 1649. The historic amphibian — the only flying example of a Grumman-built Duck still in existence — was flown to Mount Pleasant from Kenosha, Wisconsin, where it had been operated by previous owner Chuck Greenhill. The amphibian first flew following a seven-year restoration with Wichita Air Services in Kansas in May 2005, and two years later won the Grand Champion WW2 award at the Experimental Aircraft Association AirVenture show at Oshkosh (see also Aeroplane March 2015).

This Duck was delivered to the US Navy in December 1939, and is painted in the markings it wore while based at Pearl Harbor in December 1941. Following the “day that will live in infamy” attack on 7 December, BuNo 1649 flew search and rescue missions. During 1955 it sank following a crash-landing on Lake Killarney, Nassau, and was salvaged during 1991 and shipped to Miami. In August 1997 the aircraft was acquired by Flying A Services but it never came to the UK, being sold to Greenhill during October 1998.

The other two airworthy Ducks are Columbia Aircraftbuilt J2F-6 models: BuNo 33559 is with the Erickson Aircraft Collection at Madras, Oregon, and BuNo 33614 with Kermit Weeks/Fantasy of Flight at Polk City, Florida.

The two further MAFM newcomers are the world’s only Piper PA-23 Apache floatplane, N34DA, a 1958-vintage machine acquired from an owner in Maine, and Cessna T-50 N66671, previously operated by Terry Sullivan from Shreveport, Louisiana. 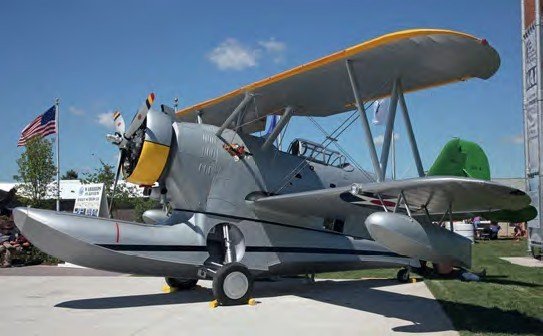