Now in the twilight of its service with the active-duty US Navy, the P-3C Orion is a type that the Philippines’ Department of National Defense has expressed interest in acquiring. Patrol Squadron 40 (VP-40) ‘Fighting Marlins’ based at Naval Air Station Whidbey Island, Washington is the last active-duty US Navy squadron to fly the P-3C Orion aircraft and after its current deployment will transition to the P-8 Poseidon.
Mass Communication Specialist Jakoeb Vandahlen/US Navy

ARGUABLY TWO of the most cashstrapped countries in South-East Asia, Malaysia and the Philippines, are seeking additional capabilities for their armed forces.

The chief also flagged the possibility of replacing the country’s ageing fleet of Sikorsky S-61A-4 Nuri helicopters with new equipment of an as-yet unspecified type.

Similarly, the Philippines’ defence secretary has mooted the acquisition of some former US Navy Lockheed P-3C Orion maritime patrol aircraft, to provide surveillance over the contested maritime areas around the country.

TUDM Chief of StaffGeneral Affendi Buang told local media representatives in early June that he plans to acquire an unspecified number of Kuwaiti F/A-18D Hornets as they become available, following their replacement by the F/A-18 Super Hornet, from 2021.

Affendi said the additional Hornets would boost Malaysia’s fighter capability by increasing the existing fleet of two-seat, allweather strike aircraft until the MRCA programme could begin in the next ten or fifteen years.

General Affendi told Free Malaysia Today: “I think we will grab some of the aircraft to add on to our current fleet, at least while waiting for the new MRCA, so we will have a slightly bigger fleet than what we have today.”

However, Affendi said that talks between the two countries had not yet taken place, so the deal remains speculative at this point in time.

Kuwait has a fleet of eight F/A- 18D Hornets, which were delivered from 1992 onwards and operated in conjunction with 31 surviving single-seat F/A-18C fighters. The aircraft are to be replaced by 32 F/A-18Es and eight two-seat F/A- 18Fs under a foreign military sales agreement with the US government.

Malaysia also has a current fleet of eight F/A-18Ds, acquired in 1997 and operated by 18 Skuadron ‘Lipan’ from RMAF Butterworth.

The MRCA programme was originally intended to replace the TUDM’s now long-retired fleet of Mikoyan MiG-29N and MiG- 29NUB fighters, but a chronic lack of defence funding has seen the project placed on the backburner. The MRCA programme has now been supplanted by a Light Combat Aircraft project, under which the TUDM hopes to replace its BAE Systems Hawk Mk108 and Mk208 fleet a decade from now (see Langkawi 2019 report, AIR International May 2019 p11).

General Affendi Buang also told local media representatives that he has plans to acquire a replacement for the TUDM’s 51-year-old S-61A-4 Nuri helicopters, but has left the door open for a competition.

The TUDM acquired 38 Nuris from 1968 and up to 12 were transferred to the Tentera Darat Diraja Malaysia (Malaysian Army Aviation) from 2015. The surviving air force helicopters are currently operated by 3 Skuadron ‘Heroes’, based at Butterworth and a limited number are intended to undergo a partial avionics upgrade, in order to keep them viable until a replacement can be found.

The first example to complete the upgrade, M23-37, was handed back to the TUDM during a ceremony at the Langkawi International Maritime and Aerospace show in March 2017.

The upgrade has been developed by Heli-One of Canada and the work carried out by Malaysian MRO Airod at Subang, outside Kuala Lumpur, with the first helicopter being a proof of concept aircraft.

The upgrade replaces flight instruments with two digital primary flight displays and two navigation displays, which include an embedded moving map display, and a flight management system. All other analogue cockpit instruments remain untouched, however.

At the time, Airod said it hoped to sign a deal with the Malaysian Defence Force to upgrade a further 14 Nuris for the air force and 11 for the Malaysian Army, but no followon contract has been publicly announced.

In 2012, the TUDM received the first of 12 Airbus Helicopters EC725AP Caracal helicopters, which was selected to begin replacing the Nuri in the Combat Search and Rescue, troop transport and utility roles. However, further purchases have not been made and how this earlier plan sits with Affendi’s latest remarks is not yet clear.

The importance of helicopter support to ground forces was highlighted during 2013, when an incursion of armed militants from the Philippines occurred in Sabah, East Malaysia. In the wake of the incursion, the TUDM transferred some Nuris to the Army, some Army AgustaWestland AW109LOH helicopters received a doormounted Gatling gun and the MD Helicopters MD530G was selected as an armed response capability to deter future incursions.

However, the six aircraft ordered in 2016 have yet to be delivered, amid reports of corruption allegations.

P-3s for the Philippines?

The Philippines’ Department of National Defense Secretary, Delfin Lorenza told the local Philippine News Agency on May 23, 2019, that the government has expressed an interest in acquiring a number of former US Navy P-3C Orions, as they are retired from service.

Lorenza said he would like to acquire two aircraft, complete with mission systems equipment, through the US Excess Defence Articles programme and would make a formal request to Washington “soon”. 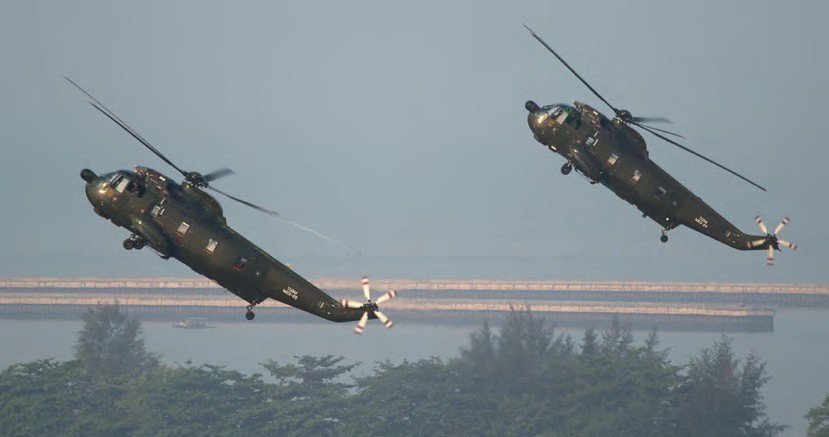 He added the Orion would be “very important” in the enhanced domain awareness of the Philippines armed forces.

The Philippines government announced in March 2019 that it would upgrade the Philippine Navy’s Naval Air Group to Wing status, to reflect an increased maritime surveillance capability to be delivered by a small number of ex-Japan Maritime Self Defense Force (JMSDF) Beechcraft TC-90 King Air aircraft.

Japan is transferring five surplus TC-90s to the Naval Air Group, with the final aircraft due to be delivered in the second half of 2019. At a ceremony to mark the arrival of the fourth aircraft in March 2019, Naval Air Group Commander, Captain Juario Marayag said: “I believe that having these capabilities gives us an unparalleled advantage to our decision makers in the front line. I cannot overemphasise the value of maritime situational awareness as a factor in achieving archipelagic maritime security.”

The Philippines government has also expressed interest in acquiring a small number of former JMSDF P-3C Orions in recent times, but again, no deal has been announced to date.