It’s not often you get a phone call that will change your life for the next 15 years. But back in 1993, Jon Blanchette had an innocent chat with a friend that would soon lead to one of the most painstaking, detailed and rewarding aviation projects we’ve ever heard of at Key.Aero.

“The Berlin Wall had come down a few years before, and all the military bases in those satellite Russian countries had opened up,” explains Jon from his home on the East Coast of America, as we chat over Zoom. “The bases had been abandoned by the military so there was all this surplus stuff lying around.

“A friend of mine was over there buying things and I said to him, ‘You know what? I’ve just retired from General Motors and I need a project that’s a little more challenging than a car.’” Jon laughs as he recalls his suitably vague purchasing instructions: “I just said to him, ‘Find me something nice.’”

A few days later, the fateful call came through. “My friend phoned and said, ‘I’ve got this aircraft with a funny nose on it.’ One thing led to another and I wound up buying it.”

Pretty soon, Jon may well have been regretting that decision. 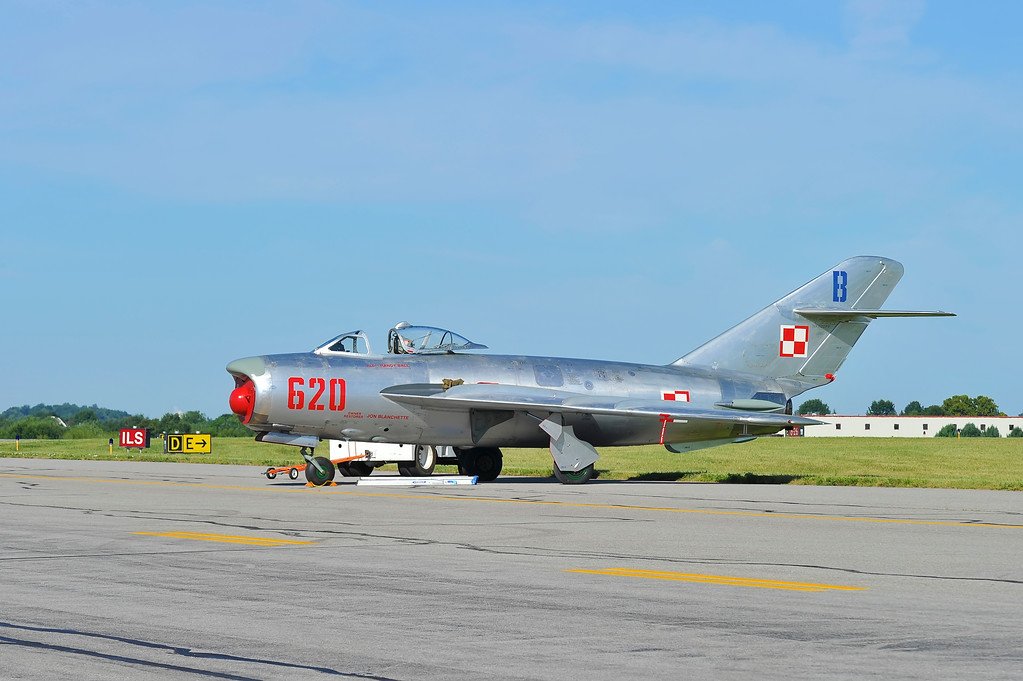 The mysterious aircraft was promptly put in a container, taken to Gdynia in northern Poland and then shipped to Baltimore in Maryland, America, before finally being deposited at the National Warplane Museum in Geneseo, New York. It was the middle of winter as Jon arrived in sub-zero temperatures to inspect the aircraft he’d just paid $16,000 for.

Jon had bought a MiG 17PF, a rare version of the MiG 17 that was not only the first Soviet fighter with an afterburner, but the first that was capable of defending Soviet air space at night and during inclement weather, thanks to its search and tracking radar. But as Jon inspected it for the first time, the collection of parts didn’t look like they’d have been capable of doing anything.

“The cockpit was full of water, the aircraft had been vandalised… it was a mess,” recalls Jon. “I had a couple of Polish mechanics who helped me on the project over the years, and they said that when the military bases opened up over there, the public came in and just looted them. This particular aircraft was headed for the scrapheap.

“Soon after it arrived in New York, I had Airframe and Powerplant mechanics look at it. They said, ‘You’re gonna have trouble with the FAA getting an airworthiness certificate for this thing!’ So I didn’t do the MiG as a business proposition – I did it as a hobby. I just went through it, piece by piece by piece. After 15 years it was in the air.”

Jon’s somewhat modest summary makes it sound like this restoration was barely anything more complex than a Lego build, but the reality is that there were many hurdles to overcome. “The MiG hadn’t been taken apart carefully – they’d pretty much hacked it to pieces,” laughs Jon. “When we looked in the cockpit, my wife took the water out, one can at a time. She reckons she took about seven gallons out of it. The water had been in there for a couple of years so it had rotted all the aluminium and magnesium controls at the bottom where the bearings were for the rod system, so those all had to be re-manufactured. I’m an engineer by degree, so I had a process in mind. After a few months people kept saying to me, ‘You’re not making any progress.’ I said, ‘Well you’re not going to make any progress over a year. But after 15 you will.” 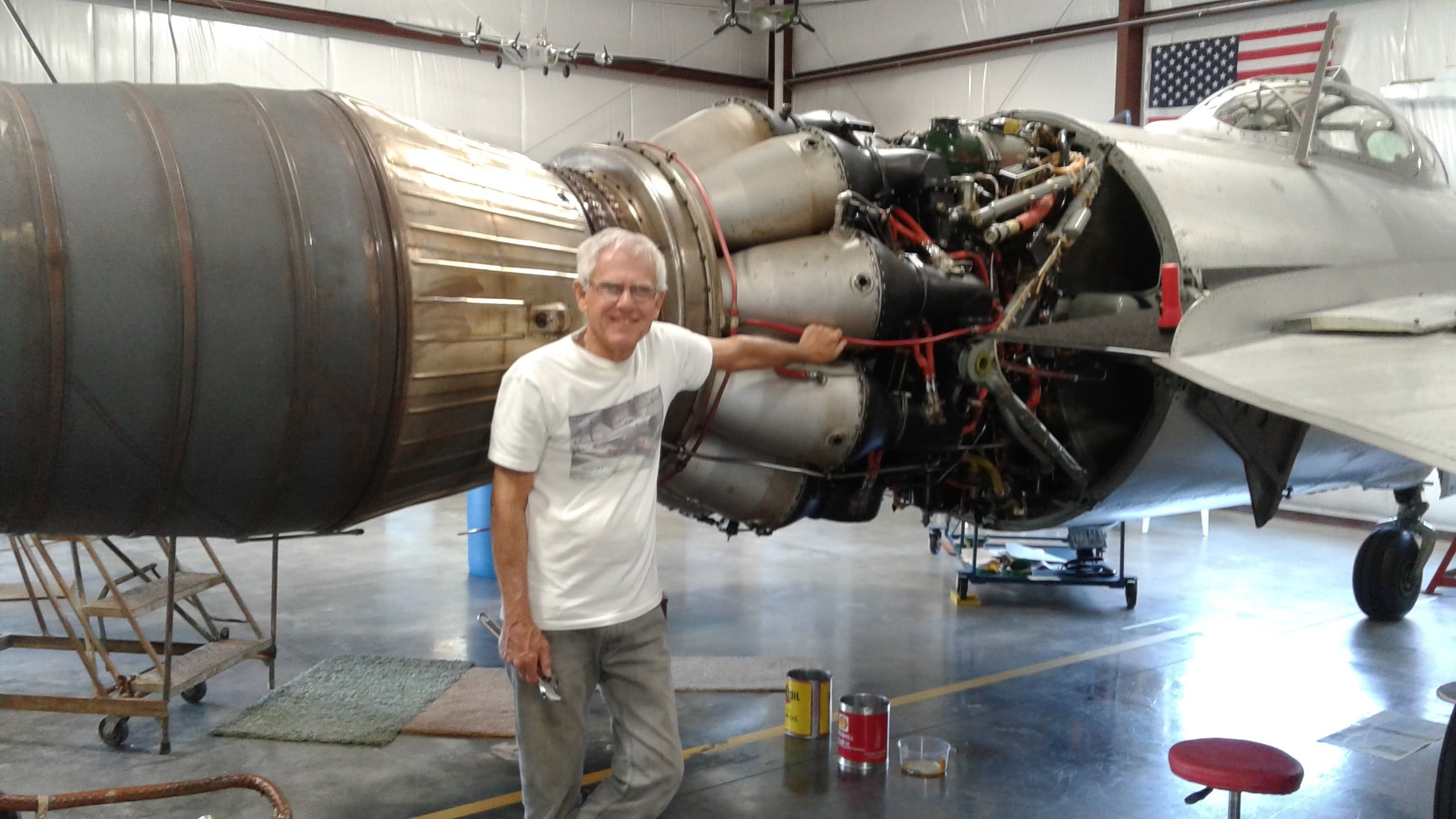 Restoring an aircraft like this is a huge undertaking at the best of times, but even more so given the difficulty in obtaining technical information. Luckily, Jon had an ingenious solution.

“I hired a Polish mechanic who used to come over to the States, and he’d stay with me for a week or two at a time,” says Jon. “He’d bring his manuals with him and eventually he just left them here. I have Polish manuals, Russian manuals, Russian parts books, Chinese manuals, some CIA manuals… I’ve got all sorts of literature on this aircraft. A lot of it is a very basic hydraulic pneumatic system – it’s not that complicated. I had to put American instrumentation in it, but I took the gun sight out, because the pilot who flies it, Randy Ball, didn’t like having it right in his eyes! He said to me, ‘If I have to stop fast I might lose my face!’ But I do still have the original gun sight and all the brackets. And where the radar scope used to be I have a Garmin 430 GPS unit.”

Type the phrase ‘MiG 17 parts’ into eBay and you won’t find much, which presented an immediate logistical challenge. But thanks to the fall of the Berlin Wall, Jon was about to stumble on a treasure chest of parts that would make the restoration possible.

“There was a guy in Phoenix, Arizona, who’d bought out a load of bases in Poland a few years before, and he brought over 40 containers of aircraft and parts to the United States,” explains Jon. “He had six huge warehouses in Arizona full of this stuff, so I managed to get a whole host of new-old stock parts. I got wingtips, gear doors – I still have a set of original Polish tyres that I got from him. When we took the aircraft to the Oshkosh show in 2016, I put some original tyres on that were manufactured in 1988. They were absolutely fine, although I use Goodyears most of the time because they’ll give you up to 25 landings. The originals are good for about 11.” 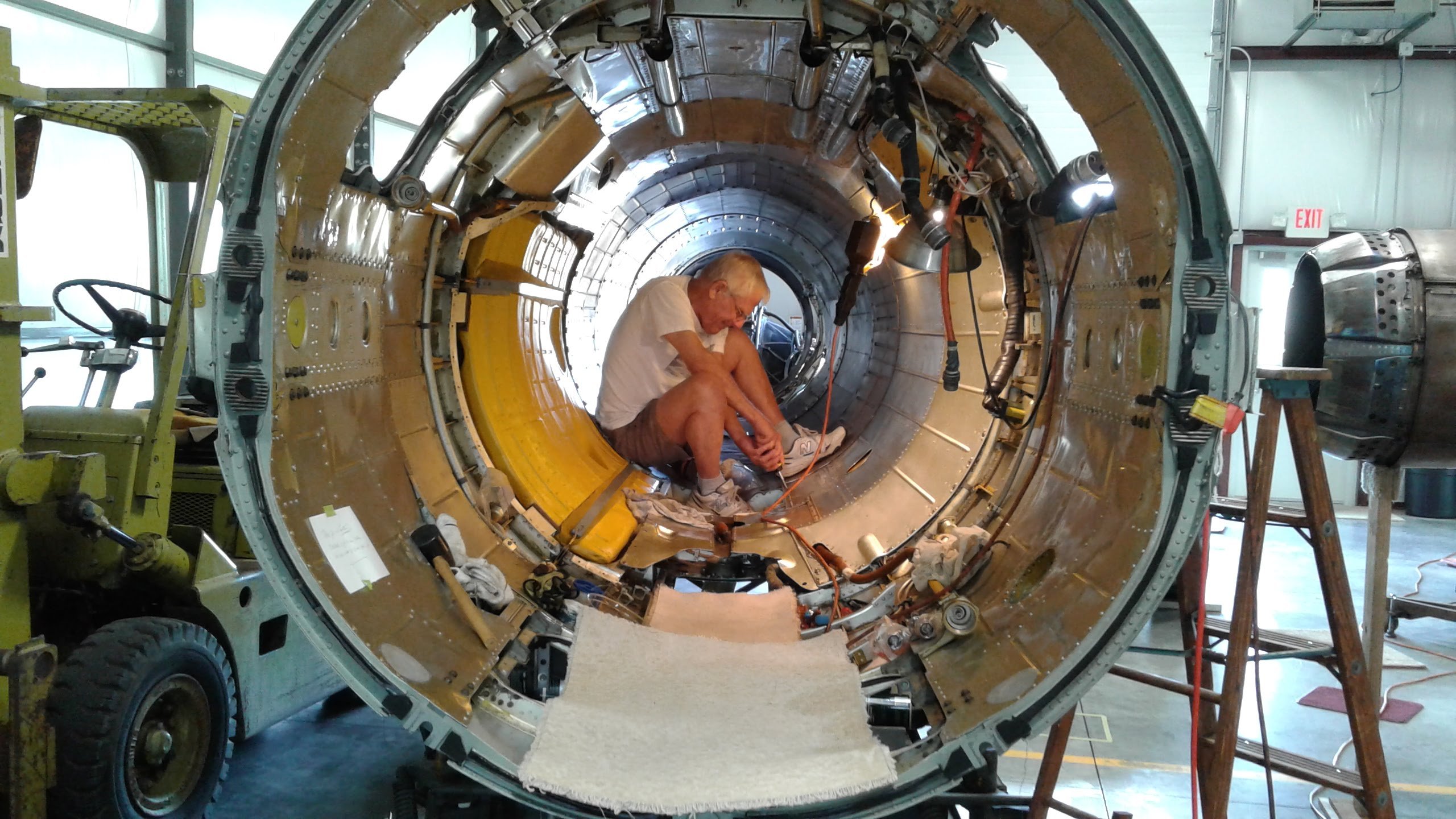 What was the most challenging part of the project? Jon mulls it over. “Every part,” he laughs. “Probably writing the inspection programme – there was a lot of back and forth about that, but eventually I got my airworthiness certificate in 2008. Randy came and spent several days with me. We’d go the airport, go down the runway, and we just spent a few days tweaking things. Finally, it was in the air. That was a pretty exciting day.” We ask Jon to describe his emotions when he saw it taking off for the first time. He bursts into laughter.

“My wife is in the background – she’s laughing!” he giggles. “Describe the emotions, Bev!”

Bev walks in and appears on the screen.

“It was overwhelming!” she enthuses. “When Randy landed he came back and said to us, ‘I bet you were more nervous with this flight than when your teenage daughter went out on her first date!’ We were.”

“Randy said he was just going to take the MiG up for one loop and then put it down again,” continues Jon. “The freakin’ guys goes off flying around over here and over here… he said that it flew so good he couldn’t put it down! A couple of days later he took it out and did all sorts of upside down tests when he certified the plane. There’s a red light that comes on in the cockpit… that’s the 8G light. When you see that flashing, you know he’s pulling hard!” Randy Ball has said that the MiG 17 feels like a brand new aircraft. When we relay this back to Jon, he simply smiles.  “Well, I took it all apart, made every part like new and put it back together. Sometimes more than once! The Polish mechanic would come in, put his hands on a certain part of the plane, wiggle it and shake his head. That wasn’t a good sign! So parts would continually be redone.”

Did Jon ever want to give up? “Nah,” he shrugs. “I’m a plugger. I just keep plugging along.”

Plugging away at something for 15 years takes an awful lot of time, though. How many hours of his life does Jon reckon he worked on the MiG? “My wife’s laughing again!” he says. “I didn’t keep track but it must be thousands and thousands of hours, and a million miles of driving to get to and from the hangar where the MiG lives, which is two hours away from my house.”

Owning an aircraft like this presents its own challenges (“You need a hangar, and access to a runway of at least 5000ft – Randy likes an 8000ft runway,” says Jon), but the running costs aren’t too bad. “Currently, Jet A is five bucks a gallon,” says Jon. “It costs about $2500-3000 to fill it up from empty, and that’ll do 700-800 miles.” We do a quick calculation – that’s somewhere in the region of $4 a mile, which doesn’t seem too excessive for running your own custom-built fighter jet. “Mind you, Randy doesn’t like it getting too close to the E-gauge – this thing has a very poor glide ratio!”

Jon lights up when he’s talking about the MiG, and with good reason. The attention to detail is incredible, and it also happens to be the only airworthy MiG 17PF in the US. It begs the question, why is he selling it? “Well, I’ve had it since I was 60 and that was 27 years ago, so you can do the math,” he laughs. “I think it’s time for someone else to have some fun with it, because it is a lot of fun. It’s got to the stage where it’s finally debugged. Every single adjustment has been made. 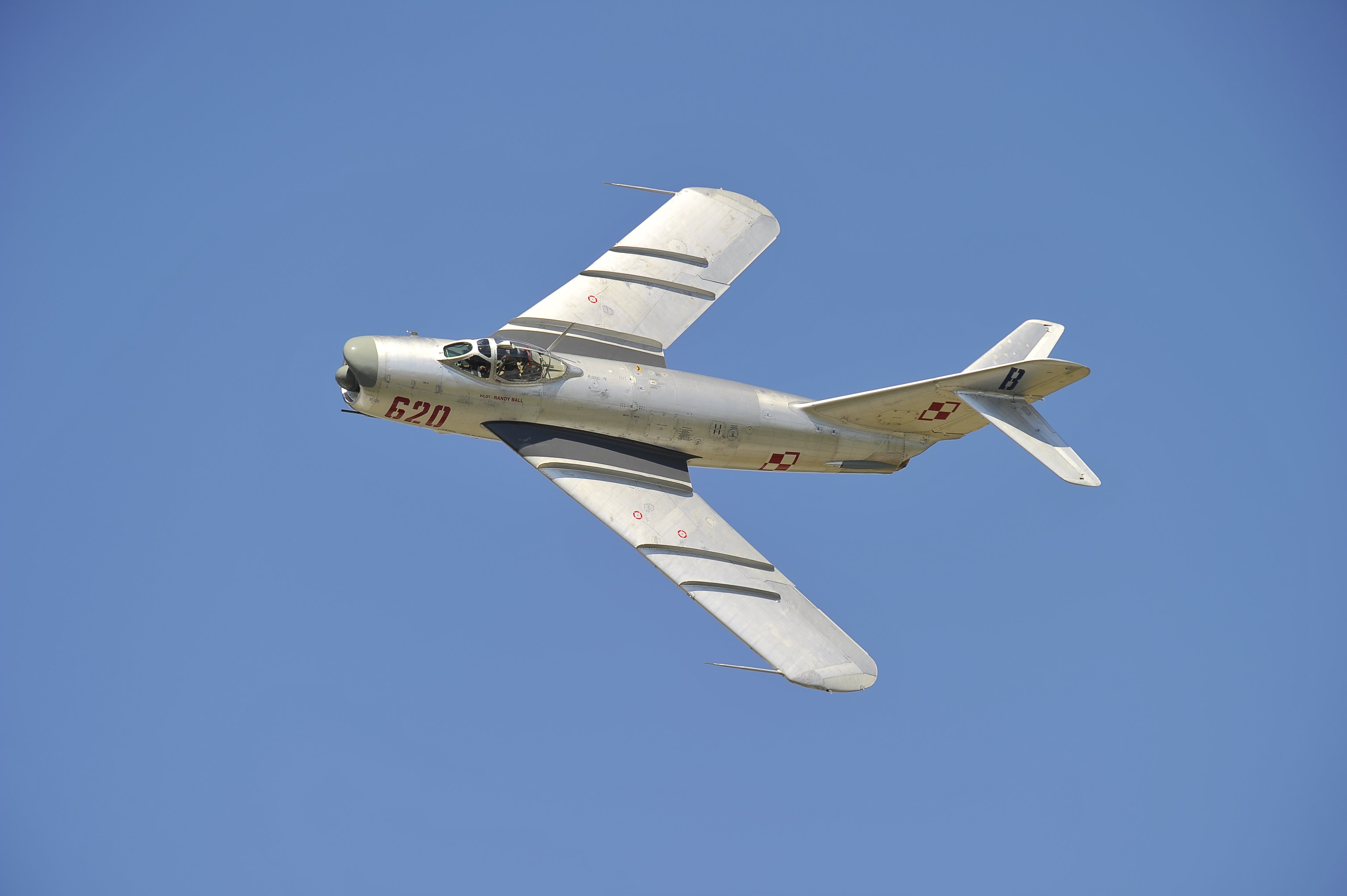 “The biggest problem with this aircraft is that it was only five or six years old when it came out of service – it went to a training base because the MiG 21 had made it obsolete. Polish students had worked on it all through the ’80s. They took it apart, wrecked it, painted it – you know what kids are like! It’s got love poems from students on it, graffiti, all sorts of stuff. They wrecked everything. The fittings were all rusted, I had to make new lines for the brakes… there’s not one part of this aircraft that hasn’t been re-done. If you look at the logbook, the engine I put in is the eighth one it’s had in its life.”

Is Jon sad to be selling the MiG? He ponders the question. “Not if it goes to the right person,” he says thoughtfully. “It’s just a material object and it needs a new home.”

Twenty-seven years after that phone call, it’s time for someone else to enjoy it.