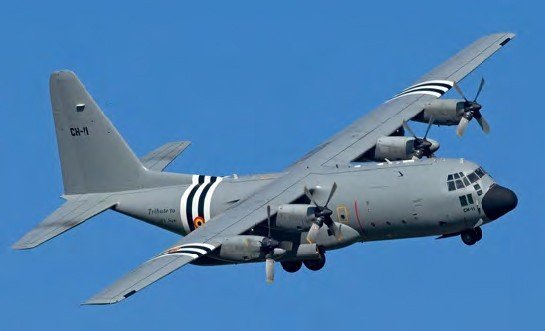 Among the aircraft participating in Falcon Leap and the Market Garden memorial event was this C-130H from Melsbroek-based 20 Smaldeel, carrying invasion stripes as a tribute to the RAF’s – mainly Belgian-equipped – 525 Squadron that participated in D-Day in 1944. 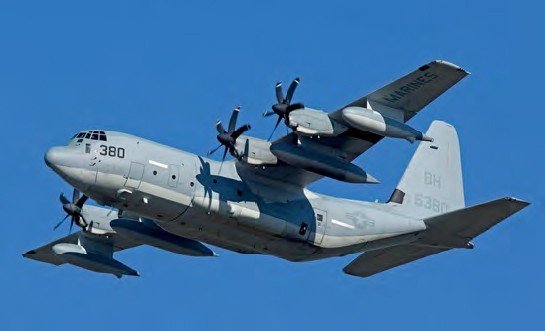 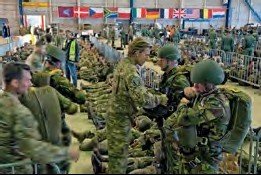 BETWEEN AUGUST 2019 and May 2020, several events will be organised in the Netherlands to commemorate the 75th anniversary of the country’s liberation by Allied Forces in World War Two. These included commemorations between September 17 and 22 in and around the city of Arnhem to remember Operation Market Garden, the large airborne and ground assault launched in September 1944 by British, American and Polish forces. A Market Garden commemoration event is held every September, including dropping of hundreds of paratroopers from a multinational fleet of transport aircraft.

This year’s event was bigger than before, with over 1,000 paratroopers being dropped over the Ginkelse Heide near Ede on Saturday, September 21.

In recent years, the annual Market Garden event is preceded by exercise Falcon Leap. The main goal of the exercise is to train multinational airborne operations, allowing participants to exchange experiences and learning to work with each other’s procedures, aircraft and equipment, including parachutes.

Paratroopers from eleven different countries participated in this year’s exercise and the Market Garden jumps: Belgium, Czech Republic, Denmark, Germany, France, Italy, Netherlands, Poland, South Africa, the UK and the US. Seven nations provided the aircraft. All Falcon Leap missions were flown from Eindhoven Air Base.

The exercise is organised in a combined effort by the 11th Air Mobile Brigade of the Koninklijke Landmacht (KL, Royal Netherlands Army) and Eindhoven-based 336 Squadron, the C-130 transport unit of the Koninklijke Luchtmacht (KLu, Royal Netherlands Air Force). This year’s exercise lasted two weeks, unlike the one-week exercises held previously. The first week was dedicated to cargo delivery system drops, with transport aircraft dropping off cargo by parachute at Militair Luchtvaart Terrein (relief landing ground) Deelen and the Doornspijkse Heide (heath) near ‘t Harde. At this stage of Falcon Leap, the number of participating aircraft was limited to four: both C-130H-30 Hercules from 336 Squadron – the short-bodied C-130Hs were not available during the exercise – as well as a Luftwaffe Transall C-160D and an Aeronautica Militare C-27J Spartan.

The second week of the exercise focussed on large-scale drops. Flying in three waves per day, formations of up to seven aircraft dropped hundreds of paratroopers at four different locations: Heelsum, Groesbeek, the Ginkelse Heide near Ede and the Regte Heide near Goirle. For this part of the exercise, the Dutch C-130H-30s were joined by a US Air Force C-130J-30, a US Marine Corps KC-130J, a Belgian Air Component C-130H, an RAF Hercules C4 and a Luftwaffe C-160D. An Aeronautica Militare KC-130J arrived on the final day of Falcon Leap, but only to participate in the Market Garden memorial drops on Saturday. 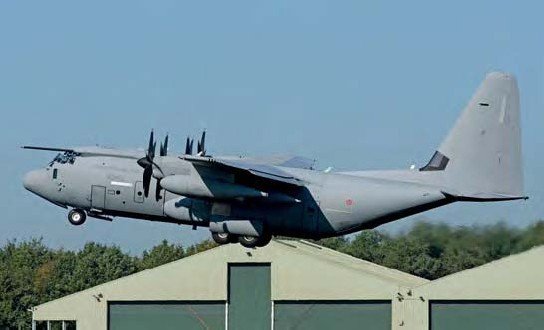 Aeronautica Militare KC-130J MM62178/46-43 takes off from Eindhoven on September 21 to participate in the Market Garden memorial event. This Hercules was recently converted to tanker standard. 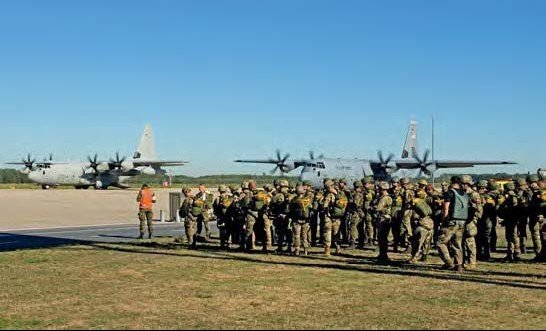 Paratroopers from different countries about to board a Luftwaffe Transall at Eindhoven, with a US Air Force C-130J-30 from Ramstein-based 37th Airlift Squadron and an Italian KC-130J from Pisa-based 46° Brigata Aerea in the background. 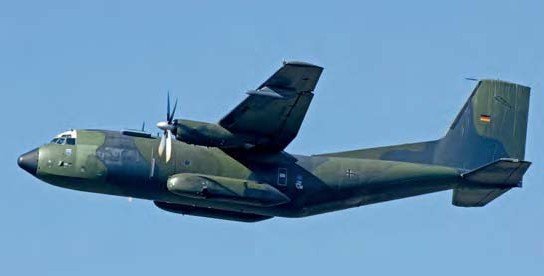 Luftwaffe Transall C-160D 50+77 from Hohn-based LTG63 participated in the second week of Falcon Leap, while another LTG63 aircraft did so in the first week. 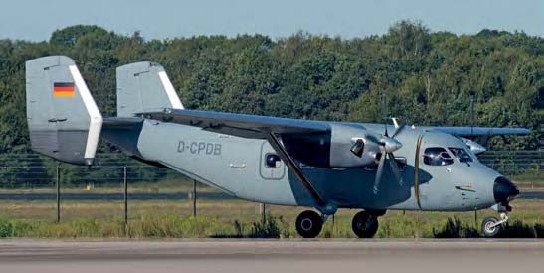 PZL-Mielec M28-05 D-CPDB was one of two Skytrucks that came to Eindhoven. PD Air Operations started flying two grey M28’s on behalf of the Luftwaffe in late 2017 and added a third, white-blue example early this year.

Flying Falcon Leap missions separately from the large formations were a Polish C295M and two German M28 Skytrucks. The latter are operated by civilian company PD Air Operations for the Luftwaffe, to support the Bundeswehr’s paratrooper training centre at Altenstadt. The M28’s were used by the British Army’s Red Devils Parachute Display Team from Netheravon, Wiltshire. During the Market Garden memorial events, the team made several tandem jumps with veterans who fought in Market Garden back in 1944. Among them was 97-year-old Alexander ‘Sandy’ Cortmann, who jumped from a M28 during the main event on Saturday.

The missions flown during the final day of Falcon Leap were used as a rehearsal for the memorial event at the Ginkelse Heide on Saturday. During the event itself, almost 100,000 visitors witnessed the massive paradrops. Among them were Prince Charles from the UK, the former Dutch queen Princess Beatrix and hundreds of invited guests from the Netherlands and abroad, including dozens of veterans. Seven Hercules and a single Transall were scheduled to drop 1,125 paratroopers that day. During the first wave, several aircraft returned to Eindhoven with the paratroopers still on board, since the wind conditions at the jump location were regarded too dangerous at that moment for those who were equipped with German parachutes. In the end, more than a thousand military personnel made the jump that day.

During most missions, the aircraft flew in two formations of four. The first formation dropped the paratroopers – who made static line jumps – at an altitude of 1,000ft, with the second formation flying slightly higher at 1,300ft. During the third wave, the Italian Hercules dropped from medium altitude (6,000ft) after the main formation drops.

As part of the memorial events, a C-47A Skytrain of the Lincolnshire Aviation Heritage Centre at East Kirkby shared the platform at Eindhoven with the Falcon Leap participants. The C-47 made numerous flights to drop paratroopers at locations near Arnhem between September 17 and 21. Also part of the Market Garden memorial event on Saturday were flypasts of Dutch historic aircraft and two displays by helicopters of the Defence Helicopter Command (DHC), including an AH-64D Apache, AS532U2 Cougar and two CH-47D Chinooks.