MAUBOUSSIN BACK IN THE AIR 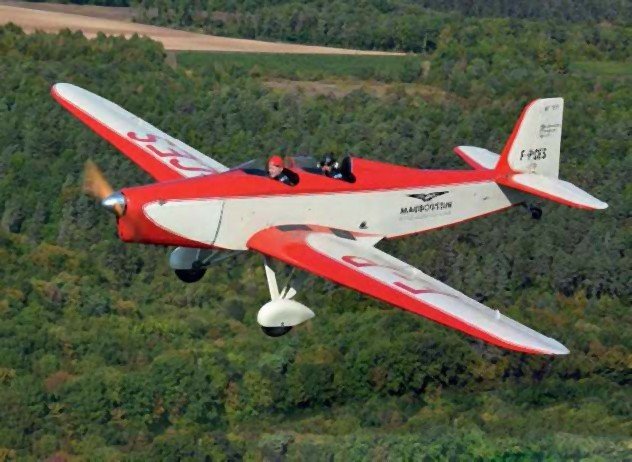 The gorgeous Mauboussin 125 Corsaire F-PCES airborne recently near Troyes-Barberey, north-east France, where its restoration to airworthiness has been completed. JEAN-PIERRE TOUZEAU

The Mauboussin Aéro Collection’s Mauboussin 125 Corsaire, F-PCES, flew recently at Troyes-Barberey airfield in north eastern France with Francis Heindryckx at the controls, following a lengthy restoration. It is a rare survivor from about 60 examples of the Corsaire line of tandem trainers/ tourers built, the prototype M120 having made its maiden flight in December 1937, powered by a 45hp Salmson 9AD nine-cylinder radial engine.

It is thought that F-PCES was built in 1938, but the associated paperwork was lost during the war, making it impossible to retrace its exact history. Originally powered by a 75hp Minié engine, it would appear that the aeroplane served during the war, as French roundels and invasion stripes were uncovered during the restoration. During 1953 it became one of five Mauboussin 125s to be fitted with the 75hp Régnier engine. It saw use with several aero clubs at Romilly-sur-Seine airfield, from where it was acquired by the association in 2006.

Now that ‘PCES is back in the air, restoration of a Salmson 9Adr-powered Mauboussin 123 is getting under way. The association also owns a Morane-Saulnier MS733 Alcyon and two late 1940s Castel gliders, a C301 and a C25.