The Microsoft Flight Simulator development team has released a new Feature Discovery Series, Episode 5 – Soundscape over on the Insider website. Episode 5 takes an in-depth look at how the team has approached audio effects for the next iteration of Microsoft Flight Simulator.

The sound engine has been totally redone and is based on Audiokinetic Wwise to recreate real-time audio effects and dynamic mixing for sound reflections, cockpit acoustics and doppler effects. The aim is to connect audio to the simulation to create a dynamic and living landscape. Aurélien said the SDK will allow audio customisation and will provide access to all simulation variables using XML files. The FSX legacy sound will still be usable in the new simulator.

To get realistic aircraft sounds, the team has a partnership with several aircraft manufacturers and recorded sounds on-site with full access to the planes. They were able to record in high fidelity with 16 channels of audio from the cockpit and externally with each microphone recording specific elements and from different angles. For example, front propeller, side propeller, close exhaust, far exhaust etc. In the cockpit, separate elements are recorded, including as switches, instruments and even flaps and undercarriage sounds. The audio effects will be fully integrated into the world environment so sound attenuation, reflections and doppler effect is remodelled and sounds such as engine pitch will be modulated like in real life.

The audio engine even affects the physics and aerodynamics of the flight model. So sounds will change depending on what the aircraft is doing. For example, a hard landing will result in an audible impact. They have also simulated aerodynamic audio effects with the airframe creaking under high g load and wind sounds increase with speed, particularly in external view.

The team has created a biome system, so depending on where you are, you will hear a different soundscape. For example, you will get very different sounds in the African savanna compared with the Alaskan outback. From the video, we could hear birdsong and insects that sounded very different depending on where we were in the world. We can even hear environmental sounds such as water lapping on the shoreline.

The night and day soundscape has also been simulated with different ambience during night time. You will even be able to hear other aircraft and ground vehicles. The idea was to add even further immersion.

The weather will also feature an accurate soundscape. For example, increasing wind strength will result in more wind noise and bigger waves on water bodies. The team also showcased rain, thunder and storm audio effects. Sitting inside the cockpit in heavy rain will result in raindrops hitting the fuselage with the associated sound effects.

TECH ALPHA 1
According to the team, invites to TECH ALPHA 1 are now completed.

The name of TECH ALPHA 2 has been changed from ‘TECH ALPHA 2’ to ‘ALPHA’ to avoid any naming confusion with TECH ALPHA 1 and is more accurately aligned with the state of the build.

As a reminder, if you are already participating in TECH ALPHA 1 testing, you will automatically be granted access to TECH ALPHA 2 (or ALPHA).

SDK Update
After a lot of hard work over the past few months, the team has announced that an alpha version of the SDK will be available in the upcoming ALPHA release!

Only third-party development partners will have access to the SDK in which they will be able to create and edit airports, sceneries, planes and missions.

The SDK makes available the same in-game tools used internally for the development of the core simulator. If you are a 3rd party developer and have not been in contact with the team, please send an email to msfsim@microsoft.com for more information. 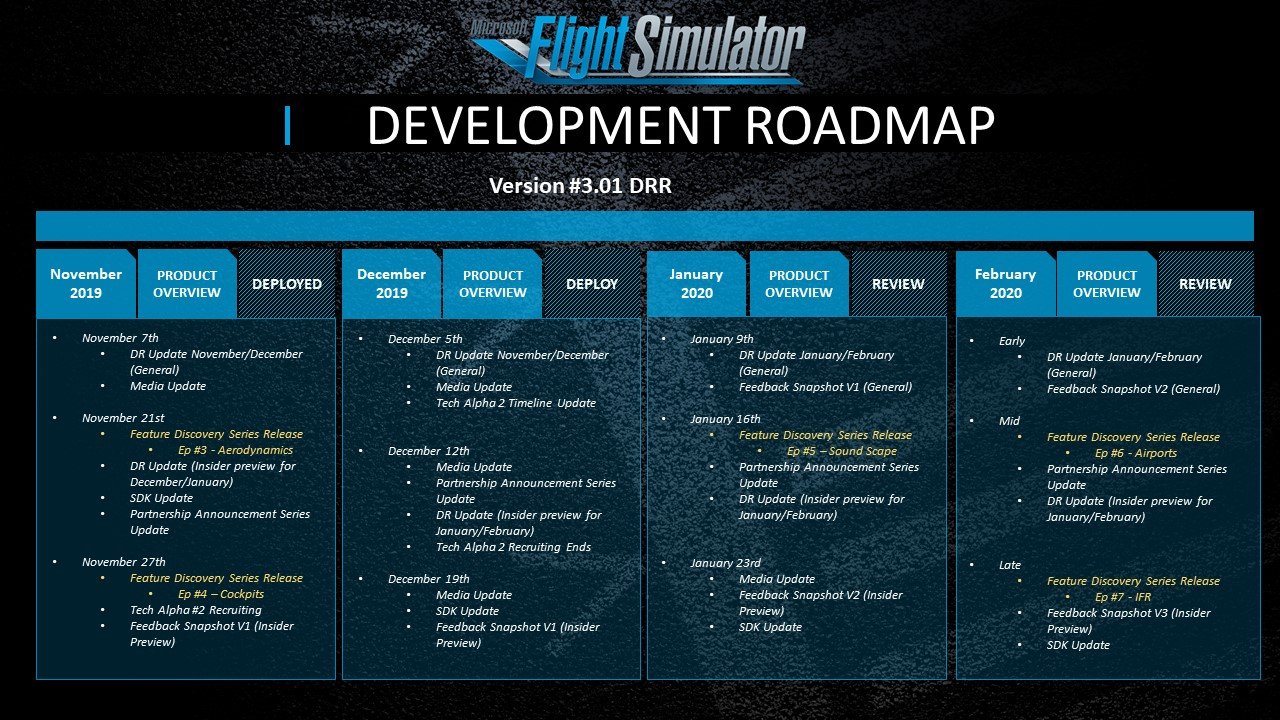 The next update will be released on January 23.