Ukraine is maintaining and upgrading its MiG-29 fleet in Lviv, where the local repair plant also undertakes work on other Soviet-era jets for a range of foreign customers, as Alexander Golz reveals.

Most of Ukraine’s modernised MiG-29MU1 fleet is also receiving this new pixelated colour scheme.
All photos Alexander Golz unless stated

Preserved between the plant’s workshops, this M-21 drone recalls Lviv’s long history with the ‘Fishbed’. The jet was put on display with the Bort number ‘70’ to mark the plant’s 70th anniversary. 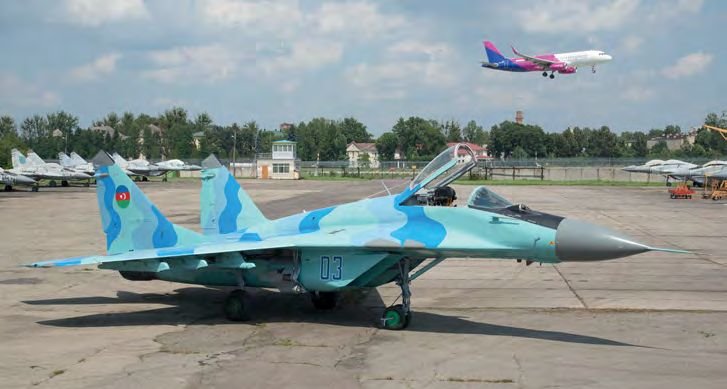 Established in 1939, the state aircraft factory in Lviv is located opposite the civilian terminal at the international airport. A total of 16 MiG-29s were processed by the plant prior to transfer to Azerbaijan, and these aircraft regularly return to Lviv for scheduled maintenance.

The MiG-29 is the backbone of the Povitryani Syly (PS, Ukrainian Air Force) fighter fleet today and is the air arm’s only combat aircraft used by three brigades. Work is under way to modernise the Fulcrum to MiG-29MU2 standard as a result of experiences during the so-called Anti- Terrorist Operation (ATO) in the east of Ukraine.