ABOVE: RAF, French Air Force and Yorkshire Air Museum dignitaries line up in front of the Mirage IVA after the unveiling at Elvington on 3 September.
YAM 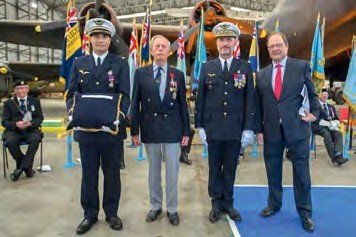 The nuclear bomber, serial 45/BR, had arrived at the museum at the end of March following more than 12 years of complex negotiations to unravel Strategic Arms Limitations Treaty protocols in order to allow the transfer of the aircraft to Elvington’s Allied Air Forces Memorial, as a gift from the French government to Britain. The 51-year-old Mirage — the only example of the variant exhibited outside France — is now displayed in recognition of Elvington’s historic links with the French Air Force, the Yorkshire base having been home to the two French units of Bomber Command, Nos 346 ‘Guyenne’ and 347 ‘Tunisie’ Squadrons. These units returned to France in October 1945, flying their Halifax bombers to Bordeaux-Mérignac, to form part of the post-war Armée de l’Air.

The memorial day also saw the presentation of the Légion d’Honneur to 92-year-old RAF Bomber Command veteran Robert ‘Mac’ McClements, who flew 38 missions as a mid-upper gunner in Halifaxes with No 10 Squadron from RAF Melbourne, just 10 miles south-east of Elvington. ‘Mac’ accepted the award on behalf of the rest of his crew, and was accompanied at the event by his wife Iris, who was a York-based WAAF plotter during the war.