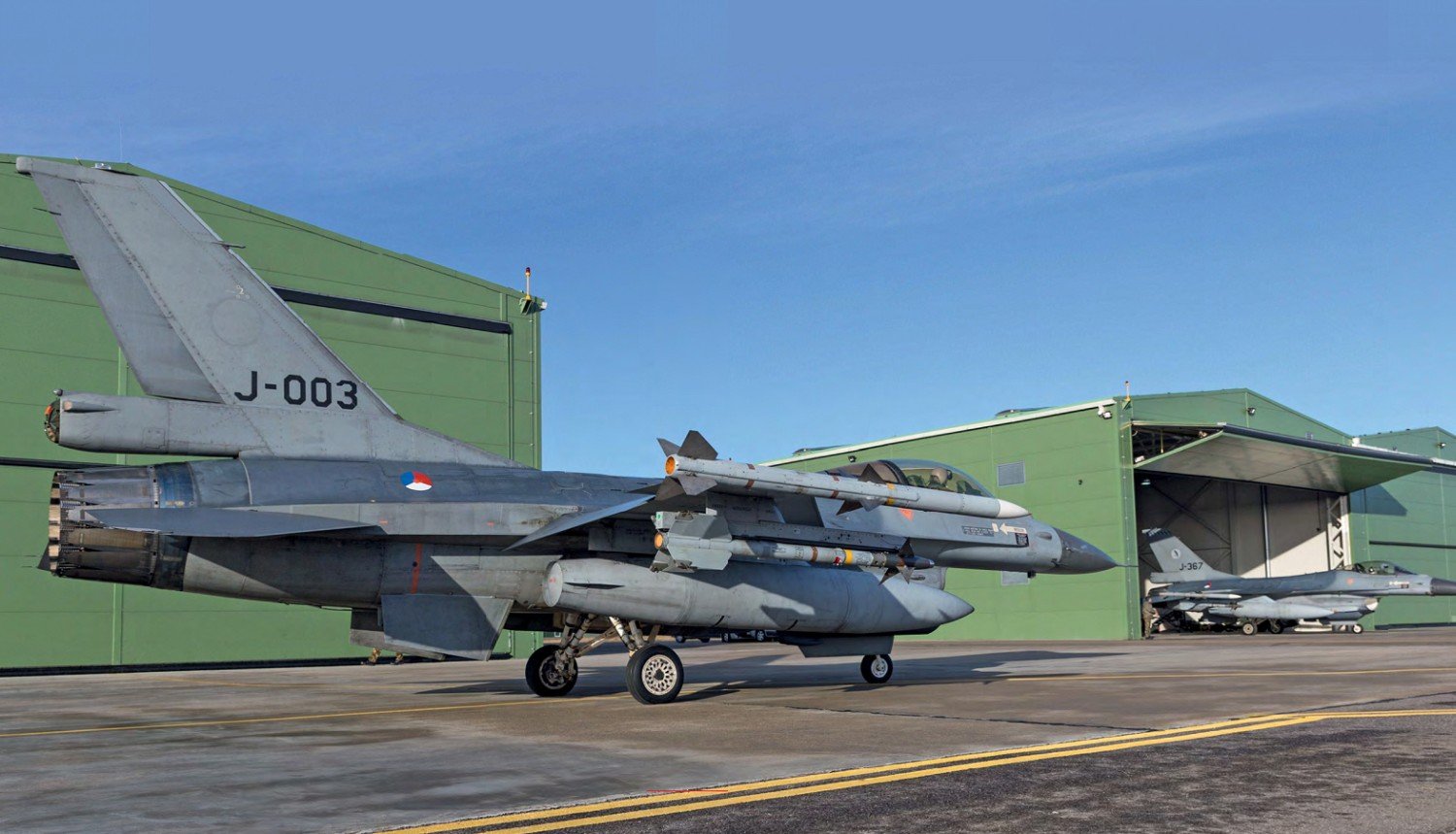 For a pilot, nothing is more lethal than running out of airspeed, altitude and ideas simultaneously; but today NATO airpower is facing problems that have the potential to be just as lethal to the institution. Multinational airpower has contributed to keeping the peace in Europe for almost 70 years, since the Berlin Airlift. However, the new administration in Washington has been reluctant to embrace the decadeslong security relationship with Europe. It has rather focused on the disparity in defence spending between the United States and its allies. In his first State of the Union address on February 28, President Trump said: “We expect our partners, whether in NATO, in the Middle East or the Pacific, to take a direct and meaningful role in both strategic and military operations, and pay their fair share of the cost.”

What is NATO doing to address this problem? What more can be done? What does this mean for NATO airpower?

Providing the larger context for how NATO airpower is directed and used has been a NATO and US security commitment. Since 2014, the level of distrust between NATO members has been exacerbated by many events: the US election; the UK EU referendum; the flow of migrants and immigrants; Turkish authoritarian trends; and many others. Divisions have deepened not only between NATO members, but also within individual countries, between national leaderships (and the political elites from which they are drawn) and the taxpayers and voters (who actually have to pay the bills). An aggressive Russia, the continuing effects of the recession, massive cutbacks in force structures and capabilities since the end of the Cold War and the politics of 2017 threaten to compound these problems.

No money, no airpower. In 2014, at its annual meeting for heads of state, held in Wales, NATO members agreed on a package of responses to Russian actions that included a target of spending 2% of their gross domestic product on defence and a fifth of that on investment, such as procurement and research and development by 2024. The 2016 Warsaw meeting followed up with an enhanced commitment to a NATO presence in the Baltic States and eastern member countries.

NATO members from southern Europe, faced with lagging economies, have been slower. Defence spending by NATO’s southern members continued to decline during 2015 and 2016. While Greece increased defence spending to the 2% level – and is looking at restoring its maritime patrol aircraft force – Italy, despite shortterm growth, is looking at making additional cuts and has not made any commitments towards reaching NATO’s spending level target by 2024.

Meeting the goal remains problematic. There remains a $100 billion gap between the objective and current plans. If Germany fulfils the 2024 goal – which on February 18 Defence Minister Dr Ursula von der Leyen said it would – it would have to spend €70 billion in 2024, while it is currently planning to spend only €39 billion.

Not Just the Money

Money is being used as an objective standard to demonstrate, for the benefit of both Washington and Moscow, a continued commitment to the NATO coalition that helped secure the peace for decades. However, money is only part of the problem. Looking outside of Europe, it is not hard to identify countries that spend large sums on national security, but in terms of effectiveness return only pennies on the dollar invested.

Money is important, but this is not a story about money. Investments in airpower take a long time to mature. It will take years before money in a 2017 budget can be turned into effective airpower. Europe is facing organisational, political and demographic factors that have the potential to exacerbate their impact. Turning increased defence spending into more effective airpower has slowed by change – in technology, organisations and expectations – over past decades. This includes the widespread existence of bureaucratically cumbersome and heavily politicised selection and procurement processes. The US armed forces are frustrated that everything they need costs so much and takes so long. Canada’s fighters and Poland’s helicopters are just two examples of defence procurement that have not gone smoothly. The costs and length of time required to develop new aircraft means re-equipment takes place once in a generation, if then. A NATO commitment to shared procurement reform targets would be harder to assess than spending, but is potentially valuable.

Aircraft have never been cheap or easy to build, but today’s aircraft are orders of magnitude more complex than their predecessors. While Europe’s aerospace industry is a powerful global competitor in several areas – most notably airliners and helicopters – its military aircraft production capacity cannot respond to a need for new aircraft across the spectrum of capabilities. France bought Lockheed Martin KC-130J Hercules tankers and General Atomics MQ-9 Reaper unmanned air vehicles (UAVs) from the United States, because the two types were the only viable options to meet short-term requirements, even though France continues to invest in Europeanbuilt aircraft, such as the Airbus A400M Atlas transport and the Sagem Patroller UAV (expected to be operational by 2018).

Limits on the number of personnel make any expansion in force structures difficult, and recruiting for European countries with all-volunteer forces remains problematic.

The temptation is to spend money on what is politically popular or convenient or what looks good in the media, rather than responding to complex strategic and operational needs. Elected politicians and high-ranking officers alike all too easily fall in love with novel and expensive projects that garner good press until they go astray. All of these happen at the expense of maintaining and upgrading existing capabilities and infrastructure. None of these problems is limited to Europe, as the US Air Force’s shortage of fighter pilots and the US Navy’s shortage of spare parts for its legacy F/A-18 Hornets demonstrate.

The shortfalls in European defence spending are real and important, but so are recent inter-European agreements that strengthen NATO’s defence posture, including airpower. While European integration may be in eclipse, inter European defence cooperation – within NATO, as well as multilateral and bilateral – has increased since 2014.

NATO airpower has been working together for decades and coordinating as best it could: fighters, sensors, weapons, training and tactics have become closer in the post-Cold War security environment. NATO’s Heavy Airlift Wing equipped with three C-17A Globemaster IIIs based at Papa Air Base in Hungary, has been an example of a new European multilateral capability.

Through NATO coordination, the UK gains use of maritime patrol aircraft from other air arms until it receives its first Boeing P-8A Poseidon.

The only time NATO airpower has deployed as the result of an Article 5 collective defence response to an attack on a member was after the 2001 terrorist attacks in the United States.

Multilateral NATO airpower commitments include the Baltic air policing and Iceland air defence missions, though participation in both has stretched diminished force structures. These commitments are taken seriously, as demonstrated when the Armée de l’Air, with operational commitments in both the Middle East and Africa, deployed for its turn at the Baltic commitment and, and in March 2015, when the Aeronautica Militaire deployed to Iceland.

NATO airpower formed a vital part of post-Cold War operations in Bosnia, Kosovo, Iraq, Afghanistan, Libya (where the UK and France flew 40% of the sorties) and many out-of-area deployments. NATO airpower has been included in agreements that have enabled increased European collaboration in the counterterrorist mission and include cooperation in special operations aviation. Even the Germans, often seen as reluctant warriors, have been willing to deploy aircraft in support of such operations. 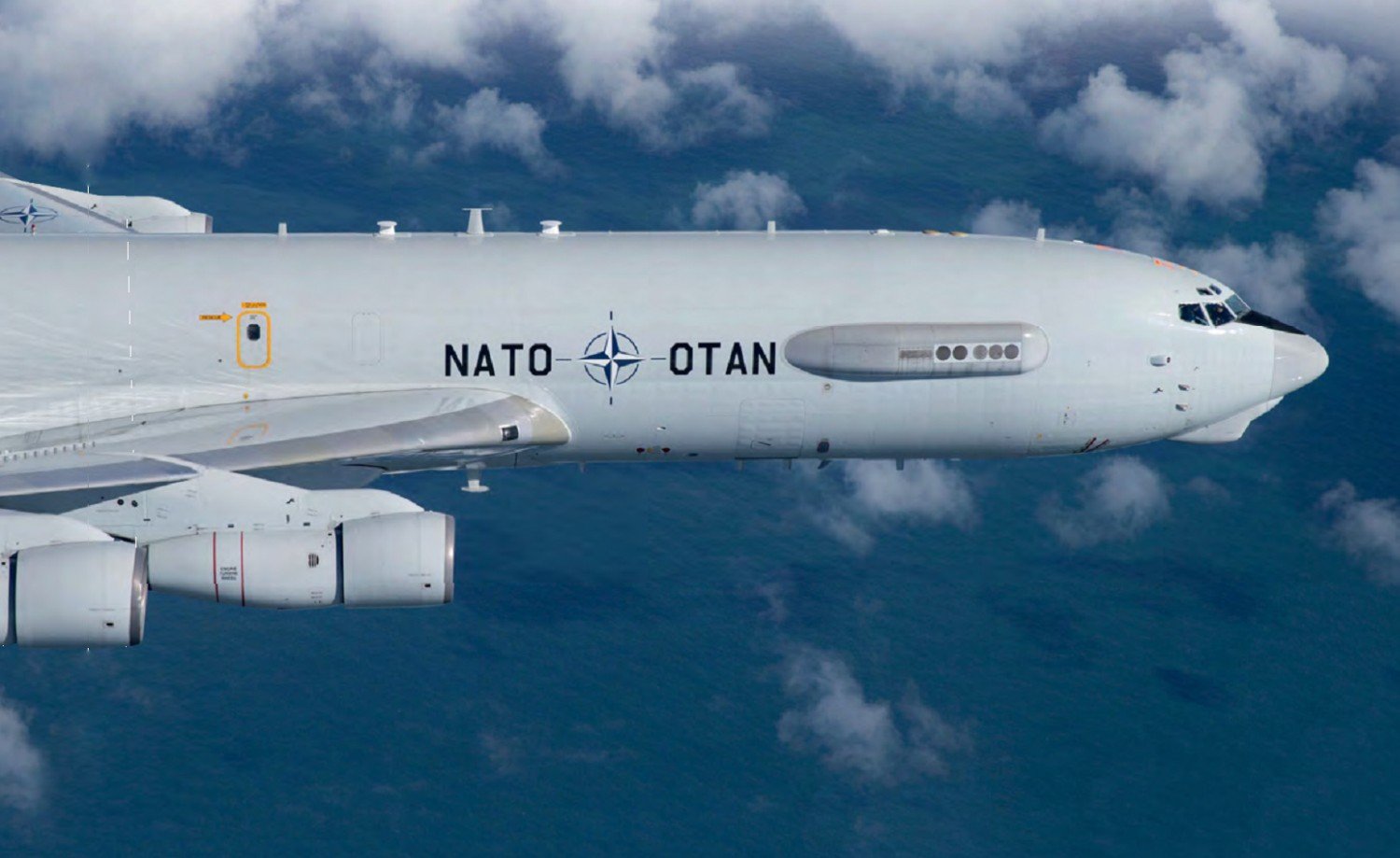 NATO’s Airborne Early Warning Force (NAEWF) equipped with E-3 Sentries, all registered to Luxembourg, are based at Geilenkirchen Air Base, Germany.
Jim Haseltine 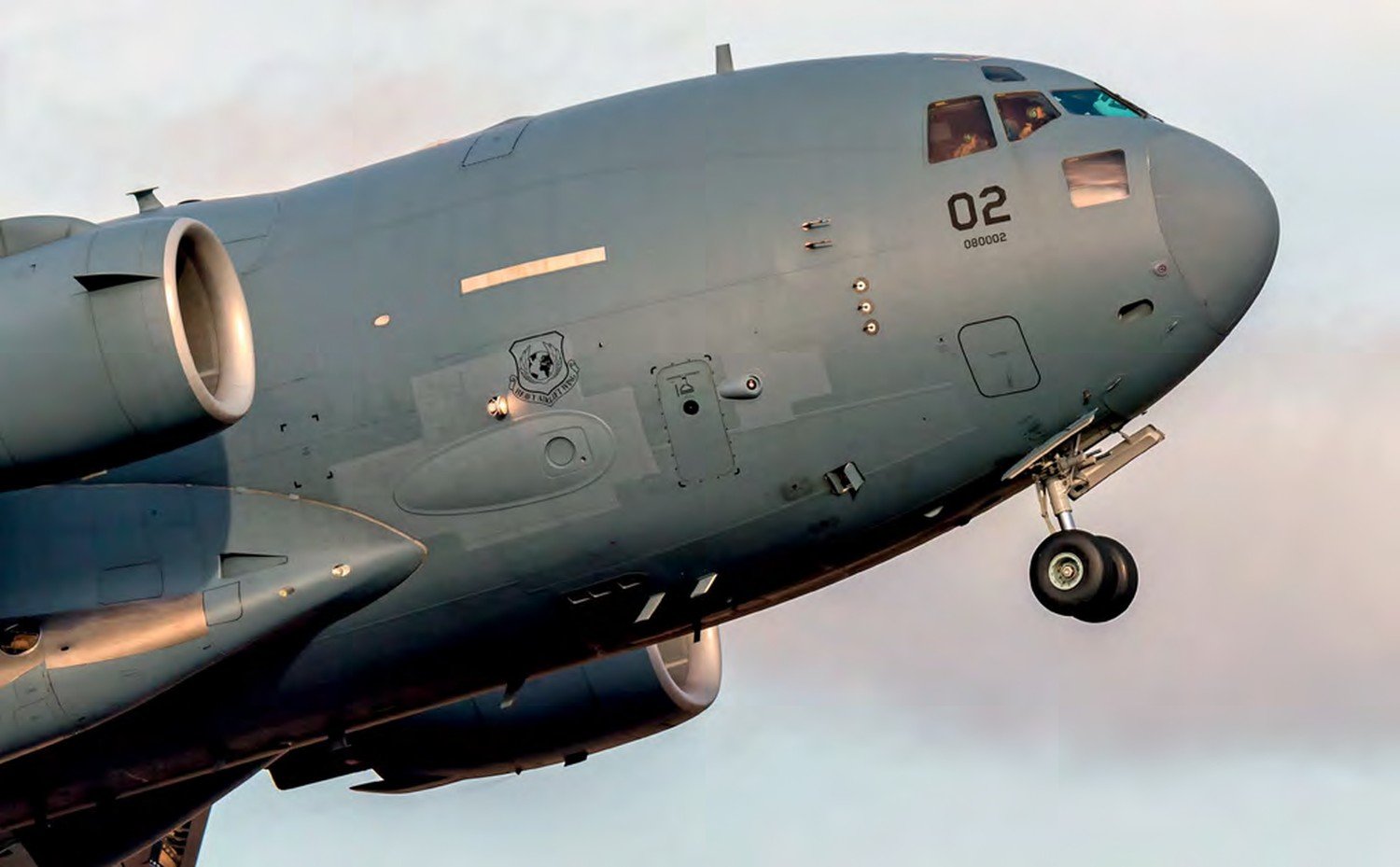 Out-of-area deployments by Germany are a reason why the Bundeswehr is now planning to procure four to six C-130J Hercules for the Luftwaffe and a larger number of CH-47F Chinooks for the Heersflieger in the near future. According to an announcement made on February 13, Luftwaffe C-130Js will be operated in a joint force with Armée de l’Air C-130s.

This agreement is one of a number of recent NATO and inter-European agreements. In 2016, the UK and France confirmed their Future Combat Air System project would conduct an unmanned combat air vehicle demonstration by 2025. Exercise Griffin Strike 2016, demonstrated Anglo-French Combined Joint Expeditionary Force (JEF) capabilities. While not large (ten aircraft and helicopters from each country deployed), it emphasised joint service command and control capabilities. The UK built on this capability for multinational contingency reaction in its commitment to lead the multinational NATO JEF in 2016’s Exercise Joint Venture. Full operational capability for the JEF is planned for 2018.

On February 15, 2017, Germany signed agreements under the Framework Nations concept to allow the Czech Republic and Romania to integrate units under German headquarters. While primarily aimed at army units, it is potentially applicable to both fixed and rotary-wing air units, as well. On February 16, the defence ministers of Germany, Belgium and Norway signed a declaration of intent to join the multinational NATO force of Airbus A330MTT tankers formed by the Netherlands and Luxembourg. The original two-tanker force, scheduled for delivery in 2020, is now likely to be expanded to eight. An agreement to produce a bilateral UKGermany security roadmap was announced on February 19, which will include looking at cooperation in a number of areas: operational, procurement and research and development.

The May 2017 NATO summit in Brussels, which president Trump has agreed to attend, will be important if it can come to grips with the mixed results of European security. Widespread, though by no means alliance-wide, increased defence spending and a willingness to cooperate will be assessed in an uncertain environment.

Results are more important than rhetoric. In recent months, the rhetoric and the visuals have been largely negative. The March 2017 US-German summit in Washington was presented largely in terms of the lack of a handshake between President Trump and German Chancellor Angela Merkel, and Trump’s post-meeting Tweet about how much Germany “owes” in defence spending. Look not at what national leaders who must please their electoral base say and do to make headlines, but rather at the concrete decisions that will affect future European security.

Two impending stress points for NATO airpower in the next decade that need to be addressed. Deterrence is hard to quantify and measure. NATO members have contributed to the forward-based nuclear forces capability, with dual-key US gravity munitions. The Lockheed Martin F-35A Lightning II will be certified for the nuclear mission by 2024. If NATO countries drop their commitment to this mission – most notably Germany, whose Panavia Tornados are to leave service by 2024 – it may be seen by Russia as continued reluctance to make politically hard decisions in the name of alliance credibility.

The E-3-equipped NATO Airborne Early Warning Force (NAEWF) has been increasingly committed to operations along the alliance’s eastern and southern frontiers, providing much-needed situational awareness and serving as a readily identifiable demonstration of NATO capabilities. NATO E-3s supplement and work alongside US Air Force, RAF and Armée de l’Air E-3s. However, the NAEWF has seen a number of setbacks in recent years. The German decision to withdraw its personnel from the NATO E-3s taking part in operations against Libya in 2011 highlighted national caveats that limited multilateral operations in Afghanistan. Canada’s decision to withdraw unilaterally from participation in the NAEWF reduced the number of operational aircraft to 14. With the forces’ operation only funded through 2025, steps need to be taken in the near future to extend the aircraft service life or (less likely) invest in a replacement. A study of options is currently underway. Giving up a capability like the NAEWF will be perceived as a weakening of NATO commitment to effective airpower.