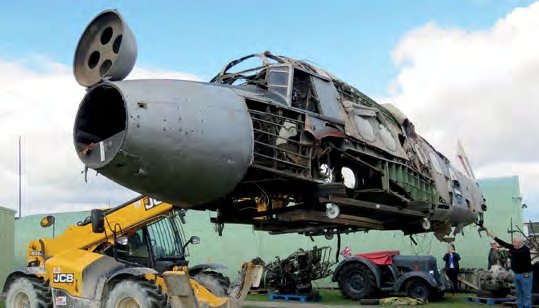 Avro Anson C19 TX226 arrived at the Montrose Air Station Heritage Centre (MASHC) in Angus, on a truck from storage at a site near Coventry, at the end of April. The 1945-built machine was previously owned by Glenn James, who operates Anson T21 WD413/G-VROE from Sleap, Shropshire. MASHC chairman Ron Morris said, “It’s a very exciting project and we are looking forward to starting restoration work, which we estimate will take around five to six years to complete.”

Anson Is first appeared at RAF Montrose in August 1939 with No 269 Squadron, and were soon flying on antisubmarine patrols over the North Sea. On one of these an Anson, piloted by Flt Lt ‘Tiny’ Burrell, attacked a Dornier Do 18 flying boat. Return fire from the Dornier entered through the windscreen of the Anson and Burrell was killed. He was a large man, but his navigator, Sgt W. E. Willits, managed to pull his body out of the pilot’s seat, regain control and fly the damaged aircraft 140 miles back to Montrose. For his heroic action, Willits was awarded the Distinguished Flying Medal, the first of the war, which was presented to him by King George VI.

Dr Dan Paton, curator of the Montrose Air Station Heritage Trust added, “Our approach at the heritage centre is different from that of most aviation museums. They collect and display aircraft, while we focus on the experience of the men and women who served here and seek to collect aircraft which have a historical connection with RFC/RAF Montrose. Ansons served at Montrose, so they fit our collections policy, but we will be looking for a personal story to attach to our Anson when it is restored.”