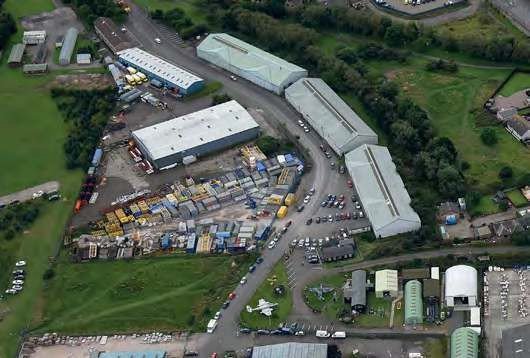 A recent aerial view of the old Montrose Air Station site, with the crescent of 1913 hangars to the top right. The new museum hangar is situated at the top of the picture, with the main museum area at the bottom right, and a Meteor T7 and replica Spitfire V on external display.
NEIL WERNINCK

“This hangar will not only be a great asset to us as we grow the museum, but it also starts the process of protecting these buildings”

The Montrose Air Station Heritage Centre has entered into a long-term agreement with Angus Council for one of Britain’s oldest and most historic military aviation hangars to become part of the museum.

Three Grade A-listed hangars — which date back to December 1913 when Maj Charles Burke, the CO of No 2 Squadron, RFC, had the buildings constructed to house the unit’s BE2s — survive on the site, and are still known as ‘Major Burke’s Sheds’. The museum already has a highly accurate BE2 replica on display.

Montrose Air Station Heritage Centre chairman Ron Morris says, “Acquiring this hangar will not only be a great asset to us as we grow the museum, but it also starts the process of preserving and protecting these important buildings. When you consider these hangars were built only 10 years after the Wright brothers flew, this should give you an idea of the place these hangars hold in aviation history. As we continue to tell the story of the role Montrose played in aviation history, in particular the contribution made during the two world wars, we expect the development of the museum will be a strong contributor to the visitor economy of Montrose in the years ahead.”

Historic Environment Scotland states, “Montrose is one of a very small group of air stations in the UK to have retained relatively unaltered hangars that pre-date the First World War. Exceptionally rare, the hangars are internationally important.”

The heritage centre has also signed a memorandum of understanding with the Royal Air Force Museum to establish a partnership to foster the interests of the two organisations through collaborative programmes and other shared learning opportunities. They will actively seek opportunities to share collections where practicable and consider special partnership loan terms where possible. Miles M.2H Hawk Major DG590/ G-ADMW, which had been in storage with the RAF Museum for more than 50 years, arrived at Montrose in January 2018 after being gifted to the heritage centre.

RAFM chief executive Maggie Appleton says of the arrangement, “We are delighted to be strengthening our ties with MASHC. At the RAF Museum it is our duty to share the RAF’s stories with the world through our archives, collections and exhibits. Further to that, we also see it as our responsibility to work with other organisations to both learn from them and share our own experience of running a museum and engaging with audiences.”