THE fuselage of de Havilland Mosquito TT35 TJ118 went on display in the Victoria and Albert Museum in Kensington, London as part of the new Plywood: Material of the Modern World exhibition on 15 July. Owned by the London Colney-based de Havilland Aircraft Museum (DHAM), the fuselage has been salted away for many years at DHAM’s storage site in Tilbury, Essex.

The exhibition features many important pieces by architects Alvar Aalto, Marcel Breuer and legendary American furniture designers Charles and Ray Eames, who experimented with plywood during the Second World War. They developed a method for moulding complex curved forms that was used to make plywood parts for various aircraft including the Vultee BT-13 trainer.

The DHAM also has the nose of TJ118 in storage. It was removed from the fuselage during 1963 and sectioned for use in cockpit interior scenes during shooting of the well-loved war film 633 Squadron. It went on to serve the same purpose later that decade during the making of the less well-regarded Mosquito Squadron. It is hoped that one day the remains of TJ118 can form the basis of a full static rebuild, possibly to PRXVI standard.

The aircraft was actually ordered as a PRXVI in May 1944, but emerged from the Hatfield production line as a B35, being part of a batch delivered between July- November 1945 and going straight into storage with No 27 Maintenance Unit at Shawbury. During July 1953 TJ118 was flown to Sywell, Northamptonshire, for conversion into a TT35 target tug by Brooklands Aviation. The last examples were retired from use with No 3 Civilian Anti-Aircraft Co-operation Unit at Exeter in May 1963.

The Plywood: Material of the Modern World exhibition runs at the V&A until Sunday 12 November 2017.

“Owned by the de Havilland Aircraft Museum, the fuselage of TJ118 has been salted away for many years at the DHAM store in Tilbury” 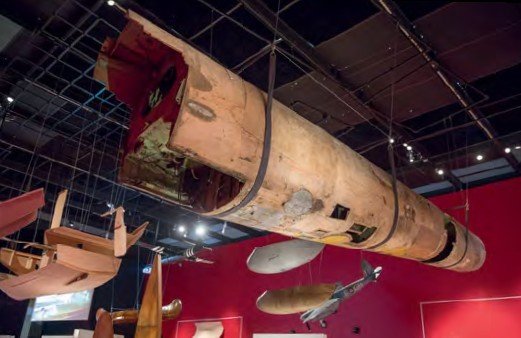 The dramatically suspended fuselage of Mosquito TT35 TJ118 at the Victoria and Albert Museum on 15 July.
V&A