Mosquito mania in UK and NZ

Worldwide interest in getting de Havilland Mosquitos back into the air continues to ramp up, with two projects in the UK making headway and the first flight of the Lewis Air Legends FBVI, PZ474, scheduled for the third quarter of this year.

On 5 March, the Leicestershire-based People’s Mosquito project announced that it has contracted Guy Black’s Retrotec company in Sussex to rebuild the remains of Mosquito NF30 RL249 into a Mosquito FBVI. The No 23 Squadron night fighter crash-landed due to engine failure at Coltishall on 4 February 1949 and was partially destroyed by fire. 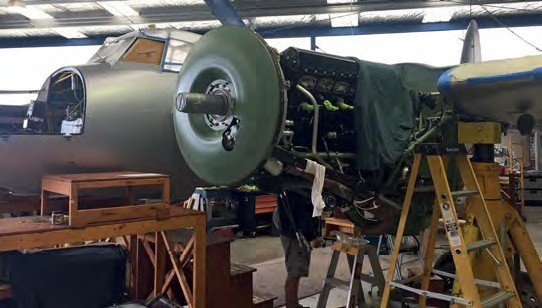 Mosquito FBVI PZ474 coming together at Avspecs’ facility in Ardmore, New Zealand. A first flight is hoped for later this year.
DAVID ASHWORTH

Following the accident, RL249 was parked up close to Coltishall’s perimeter track, and saw use as an instructional airframe and for fire practice before being buried during the early 1960s. The remains were recovered in 2010, and have been secured by The People’s Mosquito (TPM) for use in the restoration project.

“From the outset, Retrotec was top of our list”, explained John Lilley, managing director of TPM. “We share a passion for returning a de Havilland Mosquito to UK skies, but we also want to celebrate and raise awareness of what an outstanding example of British aeronautical design this aircraft was. The agreement will see Retrotec’s engineers given full access to The People’s Mosquito’s unique collection of more than 22,300 original de Havilland technical drawings to assist their work”.

TPM says, “This means the British-designed and built aircraft can be built in the UK, harnessing Retrotec’s unrivalled restoration expertise, complemented by experienced engineering consultants from New Zealand.”

Guy Black adds, “I am delighted that Retrotec Ltd has been chosen to carry out this exciting challenge and I wish TPM the very best of luck in raising the necessary funds to enable this to happen”.

During the Historic Aircraft Collection ‘At Home’ event at Duxford on 7 April Guy was due to give a talk on Retrotec’s Airco DH9 restoration and outline the next big project with TPM.

Meanwhile, the Mosquito Pathfinder Trust (MPT), which had planned to have ex-No 618 Squadron Mosquito BIV DZ542 rebuilt by Avspecs at Ardmore, New Zealand, is now looking at an alternative airframe, which could be brought to airworthiness more rapidly. An announcement on the latest plan was due from MPT in early April.

At Avspecs, FBVI PZ474 — which flew with the Royal New Zealand Air Force as NZ2384 post-war, and was subsequently operated by several different companies in California as N9909F before lapsing into dereliction at Whiteman Air Park in 1959 — is progressing well, and when completed will be painted in the markings of an FBVI operated by the legendary Banff Strike Wing on the north Aberdeenshire coast, complete with red spinners and rocket rails.