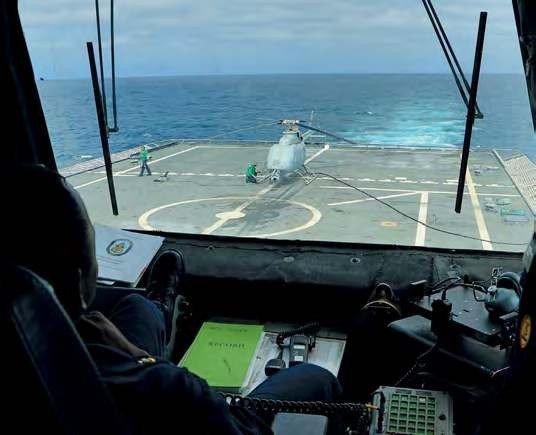 The United States Navy announced on July 6, 2018, that it has completed initial operational test and evaluation (IOT&E) for the Northrop Grumman MQ-8C Fire Scout unmanned vertical take-of and landing system.

The MQ-8C is based on the Bell 407 airframe and VX-1 performed several mission scenarios aboard the LCS while the ship was underway of the California Coast, leading up to the completion of IOT&E testing on June 29, 2018.

The US Navy said that the operations were an important milestone for both the LCS and Fire Scout and demonstrated cohesion between the surface and aviation platforms.

Lieutenant Commander Seth Ervin, lead oicer for VX-1 aboard the USS Coronado, said: “The results, lessons learned and recommendations reported on following this underway test period are absolutely invaluable to the future of the MQ-8C’s mission efectiveness and suitability to perform that mission.”

The testing included simulated engagements to evaluate the Fire Scout’s role in ISR, target identiication and surface warfare missions. The trials also explored and developed practices for simultaneous operations and maintenance of the MQ-8C with the USS Coronado’s Sikorsky MH-60S Seahawk helicopter.