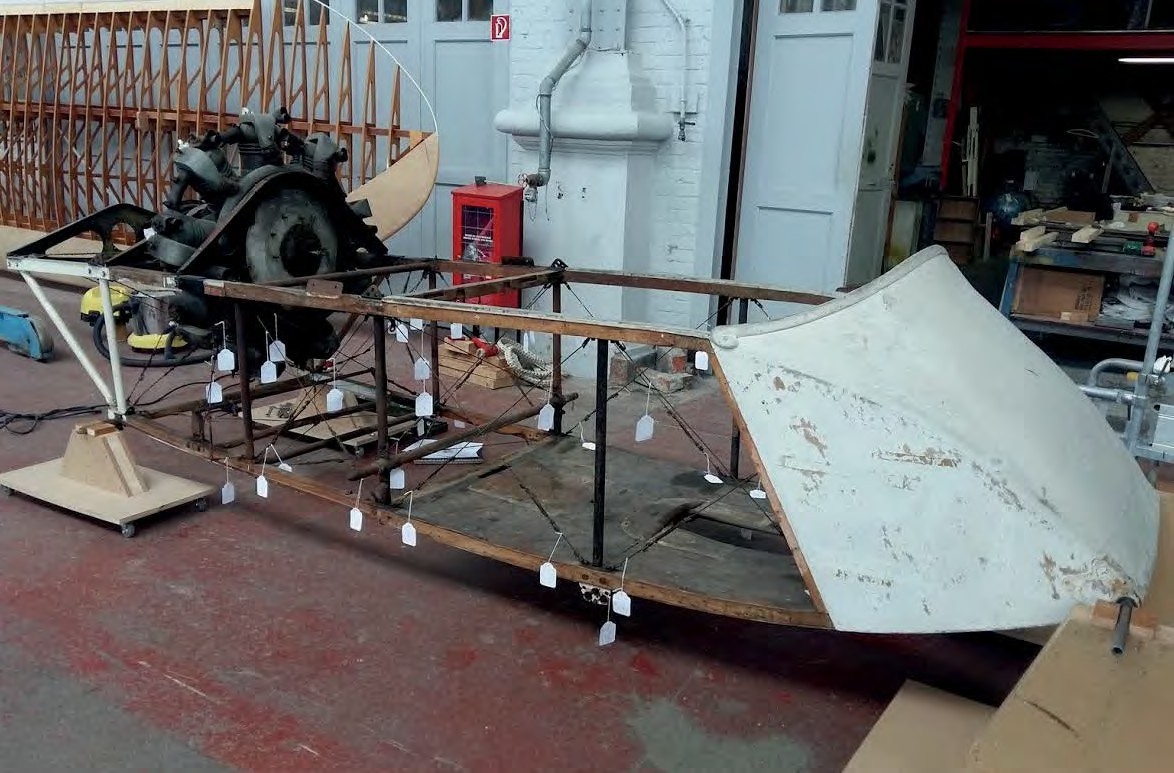 The dismantled fuselage pod of the Voisin III in Brussels, with the mystery Salmson engine still in situ. MICHAEL LEWIS

The museum, which is now part of the newly formed War Heritage Institute, received the aircraft as part of a swap many years ago with a French institution. It came without wings or tail-boom, leaving only the fuselage, engine and undercarriage to work with. The intention is to conserve as much of the original as possible and to only replace what is absolutely necessary. Being mainly of wooden construction it has suffered the ravages of time including a woodworm infestation around the cockpit floor and the pilot’s seat.

Work on the fuselage began two years ago, although it continued to be displayed up until February when it was moved to the workshops. The project is being led by expat Brit Michael Lewis, a retired schoolteacher who moved to Belgium in 2002. “My particular area of expertise is with old aero engines”, he says, “having spent the best part of seven years completely restoring a Benz IV engine for the museum’s LVG C.VI to workable condition. As you can imagine, finding spare parts for such an engine is something of a challenge, which partexplains why it took so long.

“Work has begun on the interior of the cockpit, and the radiators, fuel and oil tanks, water pump and carburettors. The triplex side panels of the fuselage have now been treated to prevent any further spread of the worm infestation so prevalent in the cockpit floor, which in some parts will no longer even support the weight of the average person. Parts of the floor may well need replacement in order to maintain structural integrity but, that said, any restoration work will be kept to an absolute minimum.”

Power for the Voisin came from a Salmson M9 nine-cylinder radial engine producing some 130hp. Michael Lewis says, “The engine fitted to our aeroplane is something of an enigma as the manufacturer’s plate on the crankcase is blank, missing both type and serial number. Eventually the unit will be completely dismantled and the hope is that then the team might discover exactly which version of the Salmson they are dealing with. All engines in full production are normally stamped with a serial number; its absence and that of the type configuration could possibly mean that it is a prototype engine and therefore very rare indeed, but at the moment this is speculation as there may be other explanations.

”The triplex side panels of the fuselage have now been treated to prevent any further spread of the worm infestation so prevalent in the cockpit floor, which in some parts will no longer even support the weight of an average person”

“What we do lack at the moment are any accurate constructional plans, and so if anyone reading this knows of any, their help would be gratefully appreciated.”

The Voisin III was conceived as a multi-purpose two-seat pusher biplane, intended for reconnaissance, artillery spotting, ground attack, day and night bombing, and training. The fuselage nacelle boasted a lightweight steel frame, the prototype taking to the air for the first time during 1914. During the early stages of World War One it was the most numerous Allied bomber in service, the relatively robust construction permitting a bomb load of 330lb to be carried. Later versions were able to fly with twice that load. It was built in significant numbers for the French Aéronautique Militaire and under licence for the Russian air service. Some were purchased by Belgium and Romania, and about 50 built in the UK.

Improbable as it may seem, the type’s most significant claim to fame was as a fighter: on 5 October 1914, over the Reims area of north-eastern France, a Voisin III from Escadrille VB24, flown by Sgt Joseph Frantz with Cpl Louis Quénault as his observer/gunner, shot down an Aviatik B reconnaissance machine. After Quénault had expended two 48-round magazines his Hotchkiss M1909 machine gun jammed, but he doggedly continued the engagement with his rifle. The Aviatik crew, Oberleutnant Fritz von Zangen and Sgt Wilhelm Schlichting from the Feldflieger Abteilung (Field Flying Company), then gained the dubious distinction of becoming the first two fatalities in ‘proper’ air-to-air combat; Russian pilot Pyotr Nesterov had died after ramming an Austrian Albatros B.II in his Morane- Saulnier Type G on 9 September 1914, taking the Austrian crew with him. 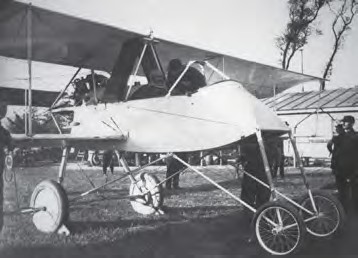