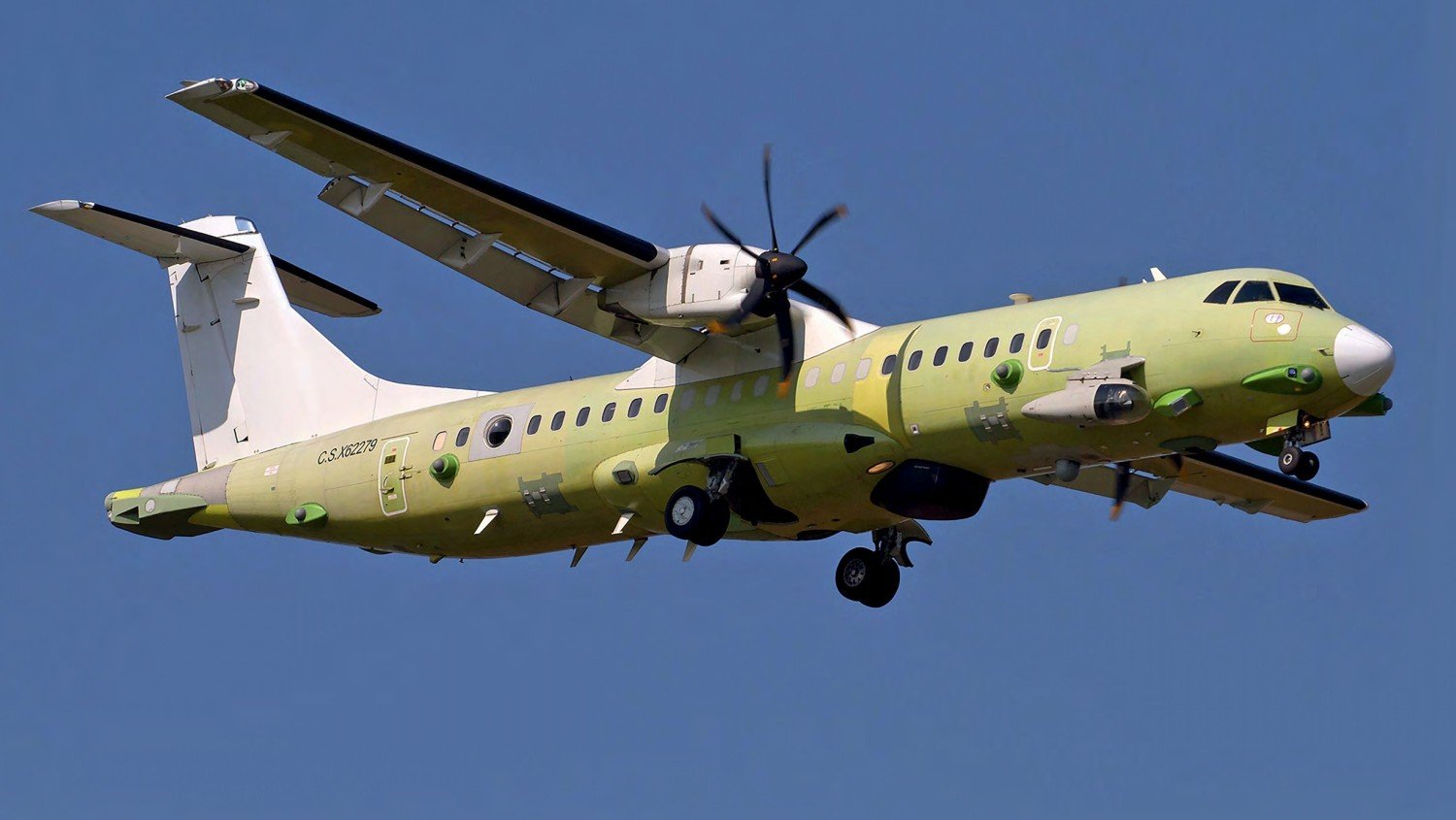 1 P-72 CSX62279 seen on a test flight from Verona airport. Note the installation of a high-powered search light near the starboard side nose.
Roberto Bianchi

Since 1974, 16 Breguet Atlantic maritime patrol aircraft have served with the Aeronautica Militare’s 41° Stormo, but after four decades of service, the platform is growing obsolete.

The Aeronautica Militare envisaged an aircraft and system capable of performing maritime surveillance tasks, mainly in the Mediterranean Sea, to complement and partially replace the Atlantic. However, over time the Aeronautica Militare’s priorities shifted to a medium endurance aircraft able to conduct maritime surveillance and electronic intelligence (ELINT) simultaneously as a command post and communication node with a network-centric system.

In December 2008, the Aeronautica Militare ordered four Alenia Aeronautica (now Leonardo) ATR-72MPs. According to Leonardo, development of the type began immediately after the contract was signed in 2009, though the process was affected by requirement changes.

The first two ATR-72MP aircraft, designated by the Aeronautica Militare as the P-72A, were delivered on December 13, 2017, and are expected to be declared with initial operational capability in the coming months. Leonardo is marketing the P-72A to nations around the world, and presented the type at the Langkawi International Maritime and Aerospace exhibition on its international debut.

The P-72A is based on the ATR 72-600, with significant fuselage modifications that include additional fairings and mounts on the nose, a 1.5m (5.5ft) tail extension, two bubble windows and one in-flight operable door. Mission systems require much greater electrical power and a cooling system.

One detail used to market the commercial ATR 72-600 is cabin width measuring 2.57m (8ft 5in) at its widest point (the largest in its class), which is used to good effect on the P-72A, with most of the port side reserved for storage and mission systems and servers.

2 An extension to the aft fuselage houses the electronic support measures system and mounts for a future magnetic anomaly detector boom.

An inflight operable door and a foldable slide used to deploy life rafts and other search and rescue equipment are installed in the aft of the cabin.

Seating comprises two seats for each observer station, one at each bubble window and eight aft of the mid-fuselage to carry additional crew or passengers.

Behind the cockpit is a mission planning desk with four connection points to link laptops to the network.

Stefano Porreca, Sales Engineering, Leonardo Aircraft, said one of the four points provides the operator (the mission commander) with the same display as each of the four mission consoles used by the ATOS (Airborne Tactical Observation and Surveillance) system operators, enabling the mission to be coordinated from the operator’s seat. The remaining connection points provide satcom of both classified and unclassified communication.

Like its civilian counterpart, the P-72A is powered by two Pratt & Whitney PW127M turboprop engines each rated at 2,750hp with six Hamilton Sundstrand 568F blades.

External fittings have increased the aerodynamic drag by about 5%, reducing the P-72’s maximum cruising speed to 250kts (460km/h), although the endurance remains unchanged at around 10 hours at 5,000ft (1,524m).

Stefano Porreca said any company and any engineer licensed on the ATR 72 series can work on both the P-72 aircraft and the avionics, which gives any operator the ability to make full use of any ATR customer support centre around the world for parts and technical support.

Little surprise is that the P-72’s flight deck is a military variant of the civilian ATR 72 featuring a largely unchanged standard layout. Five LCD screens display the flight and aircraft information. The flight management system is integrated with the mission system, which enables the mission commander to input new flight plans and data. Below the central dashboard is an additional screen that displays the ATOS mission console, providing the flight crew with details of the mission. 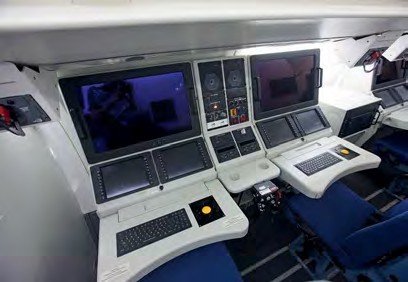 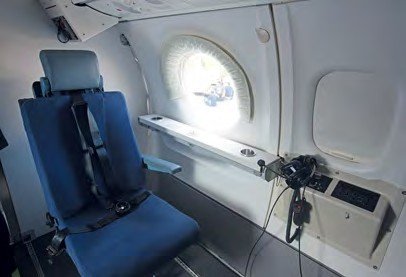 4 The aft cabin has two observer seats each adjacent a bubble window.
All images Chen Chuanren unless noted

Numerous sensors including the Selex Seaspray 7000 radar can be seen on this side profile.
Leonardo

“It becomes a force multiplier. Not only is it an MPA, but it is also a C2 platform. It is able to perform a portfolio of missions at the same time, without the need to change capability.” Stefano Porreca, Sales Engineering, Leonardo Aircraft

Leonardo has developed and integrated its airborne tactical observation and surveillance system (ATOS) on the P-72A with four consoles installed mid-fuselage on the starboard side. Each console consists of a 22-inch HD and two smaller touchscreen monitors; the role and functionality of each is interchangeable.

Flight crew and mission system operators are able to use the touchscreens to control four VHF/UHF and two HF radios in the ATR 72MP suite using the ATOS radio management system. The aircraft has Link 11 and Link 16 tactical datalinks, an L3 Vortex dual-band datalink, one Ku-band and one expandable Ka-band Satcom links.

The ATOS is compatible with various communication protocols and selects the most suitable communication type for the receiving platform, as Stefano Porreca explained: “For example, the ATR 72MP is able to receive Link 11 from naval assets and automatically relay it to airborne assets via Link 16 seamlessly, or similarly transmit hostile radar data received from its receivers through Link 16 to enhance survival of friendly forces. 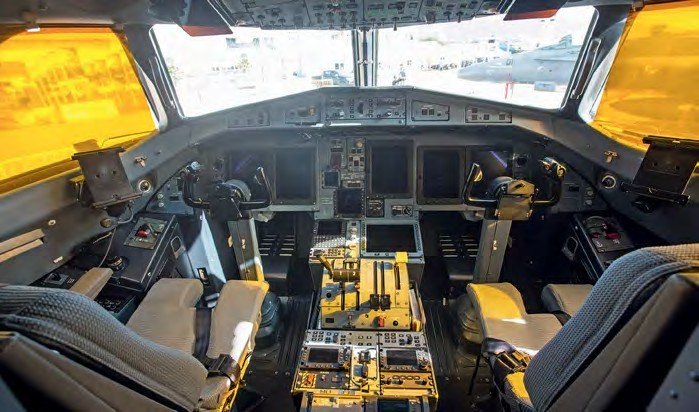 The P-72A cockpit resembles the commercial ATR 72-600, including a mission display and a DASS control system.

“It becomes a force multiplier. Not only is it an MPA, but it is also a C2 platform. It is able to perform a portfolio of missions at the same time, without the need to change capability.” Porreca added it is theoretically possible to control unmanned air vehicles via the ATR 72MP, but there are no requirements from the Aeronautica Militare to do so.

The P-72’s primary sensor is the Selex ES Seaspray 7000 X-band electronically scanned array search radar (formally called Seaspray 7300) mounted on the underside of the fuselage immediately forward of the main undercarriage. With a maximum range of 200nm (370km), the Seaspray 7000 has different operating modes that include automatic track while scan, priority tracking and secondary air-to-air tracking of up to 50nm (90km); automatic identification system is also integrated with the radar to provide automatic labelling of ship name and details over each track.

A FLIR Systems Star Safire HD electrooptical turret is fitted on the forward under fuselage, which is integrated with a CCD (Charge Coupled Device), an infrared camera and a laser rangefinder. Its CCD camera has 120x optical magnification and a field of view between 29 and 0.25 degrees. Star Safire is slaved to the Seaspray radar and the ATOS, to enable the operator quickly to acquire the radar track of interest and visually identify the target.

Fitted around the airframe are ten radar warning receivers that are all part of a self-protection suite based on the Elettronica ELT800V2 electronic support measures system, with ELINT and geolocation capabilities.

Porreca said the P-72A has provision for the MAD boom, and external hard points could be fitted should the requirement change over time.