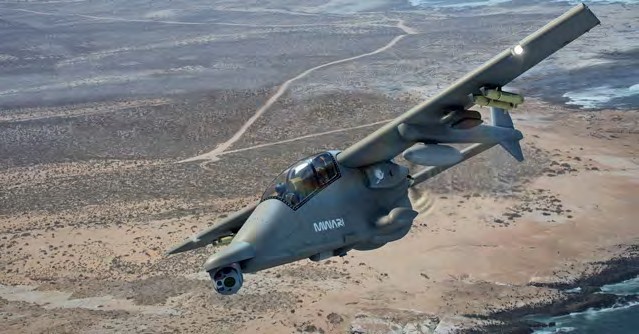 Paramount is keen for collaborative production of the Mwari in the UAE and other countries in the region. Although not confirmed, Paramount is believed to have at least one launch customer for the Mwari. Paramount

Paramount Group is putting its advanced high-performance reconnaissance light aircraft (Ahrlac) into production at a new facility at Wonder boom airport, South Africa in April this year. The 15,000m2 facility will produce the unarmed Ahrlac, which will be outfitted with mission systems at a separate facility for conversion to the militarised Mwari. Paramount’s Wonder boom facility has capacity to manufacture two aircraft a month, and up to four if necessary. Paramount promoted the Mwari at the recent IDEX defence exhibition in Abu Dhabi, where it attracted interest from delegations from Abu Dhabi, Colombia, Greece and others. Paramount hopes to expand its presence in the Middle East, particularly with the Mwari, offered as a cheaper option than a helicopter and with greater speed and range.

The first prototype, registration ZU-XDM, has accumulated over 250 hours of flight testing since its first flight on July 26, 2014, including deployments to locations along South Africa’s borders, and in Botswana, where remote operations and hot and high flying were tested. ZU-XDM is fitted with an electrooptical turret, an Avni thermal imager and other sensors, while the second prototype ZU-ADM, which is nearly complete, will have a full mission system, conformal fuel tanks and weapons, including Mokopa missiles. Under a partnership announced in 2016, Boeing is supplying the mission system. Guy Martin