We know lots of you have great flying tales from parents and grandparents – now’s your chance to tell them on Key.Aero

Welcome to MyPast – Key.Aero’s new weekly feature that lets you share your family’s brilliant historic aviation stories.
Every Friday, one of you will get the chance to tell your fellow historic aviation enthusiasts about someone in your family, be it their exploits in the RAF back in the day or their time flying early commercial aircraft.

To kick things off, Key.Aero’s Assistant Editor for Historic Aviation, Tara Leggett, recalls her own family’s flying history...
“As far back as I’m aware, there have been men in my family who have joined the RAF. One that I’m particularly proud of is the story of my grandfather, Pops.

“Pops joined the RAF in 1956. In November, funnily enough. I imagine he must have been around 18 or 19. Already a member of the Royal Training Corps, he enlisted as a regular at Cardington. When I was 18, I studied the Cold War at A-Level, so knowing that my own Pops was involved in such a strange – albeit relatively uneventful – conflict at that same age is slightly crazy to me.

“I asked Pops about his experiences in the RAF. He never used to talk about them much – like many men of his age, he isn’t particularly chatty when it comes to his time serving. But after some coaxing, he opened up...

“After some research I have come across a picture of me when I was in the RAF at Cottesmore in 1959, which you can see here.
“In the picture I'm the chap standing alongside the ladder where the pilot is just climbing.

“The Crew Chief "Fergie" Ferguson is on the left. As soon as the last crew member was in, I detached the ladder and ran like hell before either getting run over or blasted by four Conway jets blasts on full power. Usually Fergie and I collided!

“The chap behind me (the other side of the nosewheel door with the aircraft number on it, XH592), yanked out the ground electric cable connectors at the same time and joined in the melee.

“This was in the height of the Communist era and we got that Victor aeroplane off in four minutes flat after weeks of practice.

“I've been looking for the photo for many years and only found it a few days ago after an article appeared in the XV Squadron magazine by a former Flt.Lt. Nav. Plotter, whose article was all about the way we managed to drop the scramble time from 15 down to four minutes.” 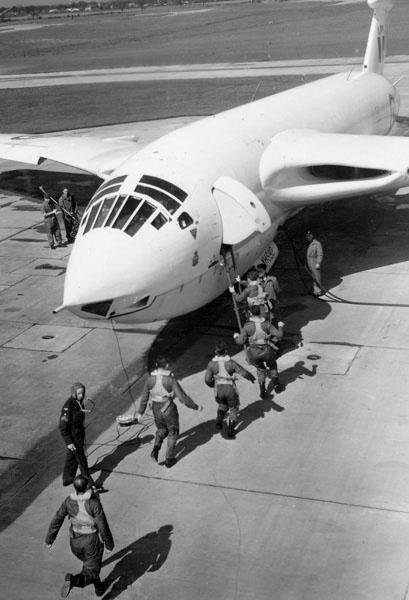 Do you have some family historic aviation stories to share? Get in touch with us now at mystory@key.aero!