In this week’s MyPast, we hear part 2 of Wally Layne’s wartime story. David Layne tells of some of his father’s key movements before the events that lead to his unfortunate capture… 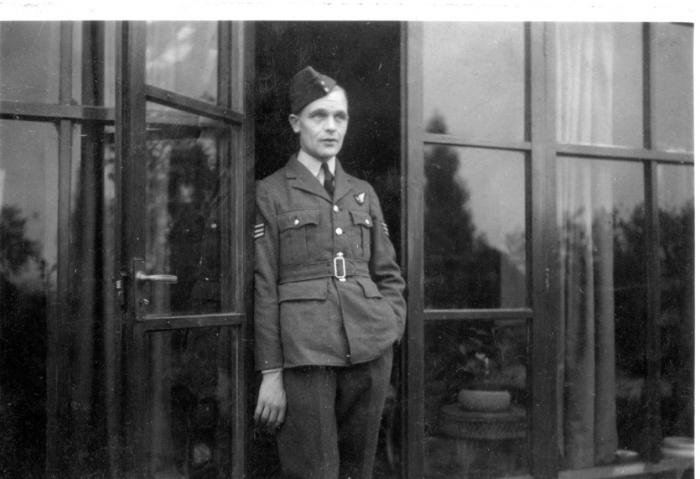 “Between 1941-’43, Wally Layne completed tours with 50 Squadron and 97 Squadron, being assigned to a conversion squadron in between.

“On 6th July 1941, The RAF sent a force of 88 Hampdens and 21 Wellingtons against Brest. On his first operation, Walter Layne’s crew was one of 13 Hampdens from 50 Squadron detailed to bomb the Battleships Scharnhorst and Gneisenau along with the heavy cruiser Prince Eugen then sheltering in Brest harbour. With an estimated 1,000 flak emplacements of varying calibre surrounding the warships, Brest was described as the most heavily defended target in Europe.

“The route out was via Upper Heyford and Chesil Beach. The crew was fortunate to follow an aircraft into the target area that was drawing considerable fire. Smokescreens hid the battleships but a good run over the target area was made at 14,500 feet. Over the target, flak and tracer were very intense - working in cooperation with searchlights. The two 2,000 lbs. bombs were seen to burst on the estimated position of the warships from the docks which were clearly visible in the bright moonlight. An aircraft at approximately 3,000 feet was seen to be shot down in flames to the west of the town. Later research has revealed this aircraft that crashed at Guilers, was 12 Squadron Wellington W 5360 piloted by S/L A.G.G. Baird and crew. There were no survivors. The Fox crew returned to base with a total time of 6.00 hours operational flying. There were no 50 Squadron losses during this operation.

“On 12th July 1941, along with 33 Hampdens (12 from 50 Squadron) and 28 Wellingtons from other squadrons, the Fox crew was detailed to bomb the railway junction at Bremen, other aiming points for Bomber Command being the shipyards and the Altstadt or “Old Town”.  The route chosen was Skegness to the target, which was free of flak and searchlights. A small amount of accurate heavy flak was encountered over the target itself. Although there was a thick haze, the target was identified by the river. The bombs were released singly from 13,500 feet on three separate runs - all failed to hit the target and fell into the town. An unidentified aircraft fired cannon but was lost on the evasive action being taken by pilot Fox. The aircraft landed at Coningsby with a total time of 6.35 hours and returned to Lindholme the following day. Two 50 Squadron aircraft failed to return. Hampden AE230 piloted by Sgt. 964468 Donald Onions. Onions had been Wally’s pilot 4 nights earlier on an operation in Hamm. The second 50 Squadron aircraft lost that night was Hampden AE226 piloted by Sgt. 921757 Kenneth John Lord. One of Lord’s crew members was H.

“On 6th February 1942, Bomber Command sent 13 Manchesters and 33 Hampdens on daylight mine laying operations in the area of the Frisian Islands. The Lord crew were one of 13 crews from 50 Squadron who were detailed to lay mines in the Nectarine Area, (Terschelling). Wangeroog was identified by the coastline, Terschelling was pinpointed, and after a timed run, the mine was dropped from 650 feet. Heavy, fairly accurate flak was encountered at the West end of Wangeroog. The crew bought their wing bombs back as no target could be found for them. The aircraft returned to base with 3.50 hours flight time, at debriefing the crew reported it as a quiet and uneventful trip. After completing his tour at 50 Squadron, a young man named Sgt. Taerum was transferred to 617 Squadron and was W/C Guy Gibson’s navigator on the Dam Busters Raid. He lost his life on September 15th, 1943 in 617 Squadron’s operation against the Dortmund-Ems Canal.

“Having been granted permission to marry by his C/O Wing Commander Oxley, Walter Layne took a weeks’ leave to marry his fiancée Joan Maunders. The marriage took place on February 15th, 1942 at St. John’s Church in Grantham. Taking advantage of a training exercise, three 50 Squadron Hampdens - crewed by Wally’s friends - buzzed the church just as the bride was about to enter. She was so excited she threw her bouquet into the air. 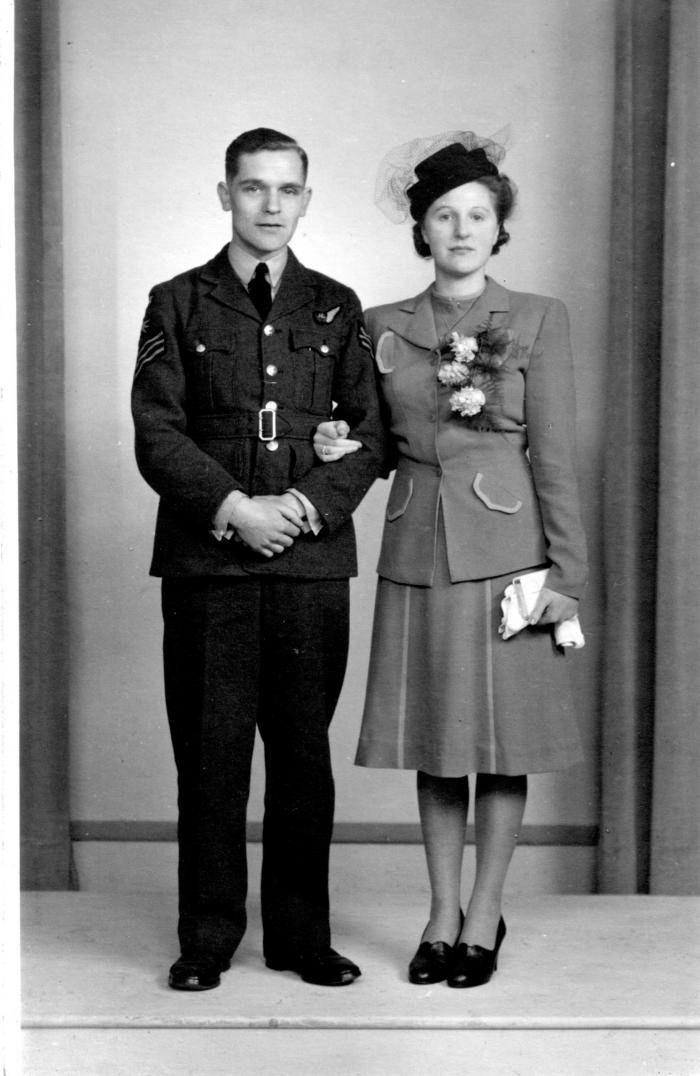 “Wally Layne served with 50 Squadron for a further month when he returned from his marriage leave. After this, he served briefly with a conversion unit. Here, OTU crews and second pilots from 5 Group were trained for conversion into Manchester and Lancaster heavy bombers. Wally made two flights in the Manchester bomber and three in the Lancaster, all in the capacity of Wireless Operator.

“On August 7th, 1942 Wally was transferred to the newly formed 9 Conversion Flight at Waddington and during the next two months made a total of seven Manchester and two Lancaster training flights as the aircraft’s Wireless Operator.

“On 2nd April 1943, Wally took part in his 37th operation, having now transferred to 97 Squadron. This was Layne’s first operation with 97 Squadron and his aircraft was the only 97 Squadron aircraft on operations that night. The squadron operated Lancaster Bombers; on this night, this aircraft was detailed for operations against the heavily defended U-Boat pens at St. Nazaire carrying a bomb load of 11 x 1,000 lb. bombs. The night was clear with good visibility and the primary target St. Nazaire was attacked from 15,000 feet. A smoke screen was observed at the target and the bombs were dropped on red T.I.’s (Target Indicators.) There was a great deal of light flak over the target, as the crew left the target area two large fires were seen. Return to the base was made with a flight time of 5.20 hours. A total of 55 aircraft attacked St. Nazaire on this the last raid on the French ports, Bomber Command having been being released from that obligation.

“The crew had settled down on their bombing run when they were picked up by a blue-tinged, radar-controlled master searchlight and were immediately coned by an estimated 10 other searchlights. The airmen were committed to their run-in, with Bomb Aimer Beesley releasing the markers and bombs at 2145 hours. Pilot Fletcher then immediately put the aircraft through the most violent corkscrew descent the crew had ever experienced. Despite his efforts, Fletcher could not lose the searchlights. Suddenly, all of the searchlights were switched off simultaneously.

“Fletcher proceeded to climb the aircraft in order to regain the altitude lost during the evasive manoeuvres. Two minutes after releasing their bombs, they were attacked by a Messerschmitt Bf110, piloted by Unteroffizie Josef Brunner operating out of Venlo in Holland. Brunner, who was working in coordination with the searchlight crews, had followed the aircraft down in its attempts to evade the searchlights.

“With the aircraft on fire, Fletcher gave the order to bail out. However, this command was not heard by Layne due to the intercom system having been put out of action. One of the bomb aimer’s duties was to remove the square emergency hatch in the nose section that enabled the crew to leave the aircraft in the case of an in-flight emergency. Removing the hatch, Sgt. Beesley exited the aircraft, followed immediately by Nelson and Fletcher.

“Wireless Operator Layne recalled later “I took off my earphones and went to see if I could help but the back of the aircraft was an inferno”. He could see the mid-upper gunners slumped body silhouetted against the searchlights in his shattered turret and the same fate had befallen the rear gunner. Retrieving his parachute from its place of stowage, Wally Layne scrambled to the front of the aircraft and found the cockpit empty; he was the only man alive in an aircraft that was in a long dive, trailing flames behind it. As he scrambled in total darkness to the front of the aircraft, Wally Layne managed to secure one clip of his parachute to the D-ring on his harness. However, the second clip was proving difficult. With his feet dangling in space from the bomb aimers emergency hatch, Wally frantically fiddled with the second clip until it eventually clipped into place.

“Throwing himself from the doomed Lancaster, Layne exited by the bomb aimers hatch and immediately deployed his parachute. At almost the same moment, his parachute opened and deposited him in a small clearing in the forest - not far from away from the burning remains of his aircraft. Having sustained no physical damages beyond a jarring of his heels, Wally left his parachute hanging in a tree and prepared for life as an evader…”

Credit and thanks go to David Layne