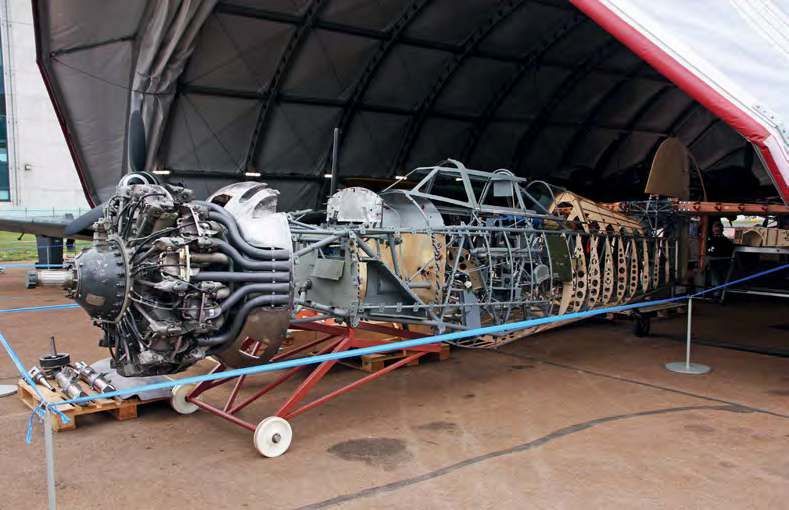 The Valtion Lentokonetehdas Myrsky II, MY-14, on show at the Finnish Air Force centenary show at Jyväskylä, southern Finland on 16 June. Completion is scheduled during 2019.

The prototype Myrsky (Storm) first flew on 23 December 1941, but soon exhibited a host of problems, including inadequate longitudinal stability, defective bonding of wooden components, and weaknesses in the undercarriage units and wing attachments, which required a complete redesign and restressing of the wing.

During May 1942 VL — the State Aircraft Factory — received a contract for three development aircraft, which incorporated many detail structural and detail modifications. The first of these flew on 30 April 1943, but was lost in a crash just a week later. The second was damaged in an undercarriage-up landing that July, and after repairs rejoined the flight test programme, but was soon to a mid-air break-up. On 17 March 1944, the third machine lost both wings in a dive.

The lessons learned were embodied in the first production variant, the Myrsky II, the type entering service with tactical reconnaissance squadron TLeLv 12 in late July 1944. A total of 30 examples had been delivered by the time of the truce that ended the Continuation War against the Soviet Union on 4 September 1944. Production continued after the truce, and the Myrsky II went on to be operated against the Germans under the terms of the Finnish-Soviet armistice agreement. Six examples from TLeLv 12 arrived at a base near the port city of Kemi, western Finland on 24 October, alongside such outdated aircraft as four Brewster Buffalos and a Fokker CX. The first mission came on 2 November, when two Myrskys flew a reconnaissance sortie over Enontekiö, north-west Lapland, but this unpopular type was to see only see limited use before the last sortie from Kemi on 23 November. Although it had been manoeuvrable enough to dogfight with Soviet fighters during the Continuation War, its mixed construction was not robust enough for the harsh Finnish weather conditions, and despite regular upgrades to strengthen the fighter, all the Myrskys were grounded after another example broke up in a dive on 9 May 1947.

Although none of them were preserved, three steel tube fuselage frames did survive, including that of MY-14 which has given the project an identity. Other surviving components included several wooden wing sections. Construction of new wings and the wooden fuselage formers have been the hardest task facing the 30 volunteers from the Aviation Museum Society, but a new port wing has been finished, the starboard is now approaching completion and the formers are now in place.