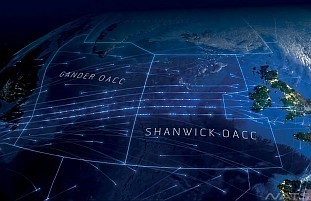 A visualisation of the tracks across the North Atlantic on a typical early morning. In 2019, NATS will start an operational trial of Aireon space-based air traffic management technology.
NATS

Space-based air traffic management (ATM) delivered through Aieron will work through a network of Iridium NEXT satellites in low Earth orbit. The ANSPs who subscribe to the system will receive position reports of airliners equipped with automatic dependent surveillance-broadcast out (ADS-B Out) equipment every half a second. The current International Air Transport Association requirement is for position reports every 60 seconds. Several major ANSPs and regulatory authorities have mandated aircraft are equipped with ADS-B Out equipment by 2020.

Aireon technology means that for the first time ever oceans and remote regions like the poles, deserts and mountainous areas will have real-time aircraft surveillance. NATS says this constitutes “the greatest revolution in air traffic management since the introduction of radar 70 years ago”.

Martin Rolfe, NATS Chief Executive Officer, says the technology will have a major impact on the provision of air traffic control services. He said:

“This is a transformational technology that will deliver the world’s first truly global air traffic control infrastructure, making flying even safer and more efficient. Investing in Aireon is the best way for us to shape the future of the service in a way that benefits our customers in the UK and elsewhere.”

NATS has announced it is planning, in 2019, to conduct an operational trial of the technology in the North Atlantic, the busiest area of oceanic airspace in the world. In 2017, NATS controllers handled 500,000 flights through this airspace, equating to 80% of all air traffic across the entire Atlantic Ocean. By 2030 it is estimated this number will grow to almost 800,000 flights a year.

Without the technology to monitor flights automatically in real time, aircraft crossing the Atlantic today follow prescriptive speed and separation restrictions along a rigid track structure which, NATS says, “limits the capacity of the airspace and forces the airlines to fly trajectories that burn more fuel and generate more carbon dioxide. Air traffic controllers can only track a flight’s progress by receiving around five position reports from the pilot every hour.”

An analysis jointly undertaken by NATS and the Canadian air navigation services provider Nav Canada (which is also part of the Aireon ownership group) and endorsed by the International Civil Aviation Organization (ICAO), projects an approximate 76% reduction in safety risk from using Aireon. NATS says this will enable it to comply with ICAO’s safety standards while also meeting the growth needs of the North Atlantic and giving airlines more flexibility in how they fly across the ocean.

NATS added: “Monitoring aircraft in real time will also support the reduction of separation distances from around 40 nautical miles to just 15 nautical miles, in turn making the airspace more flexible and with predictable fuel and environmental benefits.”

With the current annual number of 500,000 flights, the North Atlantic is like an aviation equivalent of a busy motorway, so it should prove an ideal test environment. Moreover, Rolfe said: “Its routes have now reached their limit of capacity with existing technology,” and space-based ATM is “a way to safely fulfil the ever-growing demand”.

Don Thoma, Aireon Chief Executive Officer, said the enhancements provided by Aireon’s space-based service in the North Atlantic “are a gamechanger for the aviation industry and will connect North America and Europe unlike ever before”.

The Iridium NEXT satellite constellation, which will support Aireon, will consist of 66 low-Earth orbit crosslinked satellites that, in Aireon’s words, “blanket Earth with communications coverage”. A total of 81 Iridium NEXT satellites are being built, all of which will have the Aireon payload onboard. Currently, 75 satellites are planned to be deployed, with nine serving as on-orbit spares and the remaining six as ground spares. The constellation is planned for completion this year.

Marc Courtois, Chair of the Board of Directors for both Aireon and Nav Canada, said: “The technology is real, the system is already performing beyond expectations, there are just a few more launches to go, and we are eager to start seeing the improved benefits to the aviation industry and the flying public.”