Alexander Mladenov and Andrey Zinchuk look at the most interesting participants in the largest-ever military parade staged by Russian Naval Aviation over St Petersburg, the country’s naval capital

This year’s Russian Navy day, traditionally held on the last Sunday of July, was celebrated with a lavish sea and air parade in St Petersburg, Russia’s second-largest city, known as the birthplace of the Russian Navy. The parade’s air component staged on July 30, under the patronage of Russian President Vladimir Putin, saw the participation of almost all aircraft types in the naval aviation inventory. Aircraft were gathered from many different units of the Baltic, Black Sea, Pacific and Northern fleets as well as the 859th Combat Training and Aircrew Conversion Centre at Yeisk. The majority of fixed-wing aircraft gathered at two principal bases, Kipelovo and Gromovo (the Su-30SMs operated from Besovets), while the helicopters and small fixed-wing transports operated from Pushkin airfield.

Kipelovo airfield situated near the city of Volgoda hosted all the heavy aircraft – Tu- 142MKs and Tu-142MRs with the resident aviation group assigned to the 7050th Air Base of the Northern Fleet, together with upgraded Il-38Ns from the Pacific Fleet and the Yeisk Training Centre. An Il-78M tanker of the Russian Air and Space Force, home-based at Ryazan-Dyagilevo was also present, flying in the parade with a Tu- 142MR simulating air-to-air refuelling.

In turn, Gromovo near St Petersburg housed the majority of jets - MiG-29KRs, MiG-31BMs and Su-24Ms – in addition to the Beriev Be-12 Mail maritime patrol flying boats. The helicopter force, comprising Ka-27s, Ka-29s, Ka-52Ks, Mi- 8MTV-5s and Mi-24VPs, was based at the airfield outside the city of Pushkin, near St Petersburg, together with An-72s and the sole An-140.

No doubt, the rarely seen four-engine heavyweight turboprops attracted the most attention. Both versions of the Tu-142 Bear-F – anti-submarine warfare (ASW) configured Tu-142MKs and Tu-142MRs used for aerial relay and upgraded Il-38N May aircraft were all involved.

Upgraded Il-38N May maritime patrol aircraft currently serve with three Russian Naval Aviation squadrons, one assigned to the Northern Fleet and two with the Pacific Fleet, and the training centre at Yeisk. The recently integrated Leninets Novella-P-38 all-new mission suite transforms the 1970s-vintage May into an effective multi-role maritime patrol and reconnaissance platform adequate for the maritime environment. The Il-38N is also used for SAR, minelaying, electronic and signals intelligence gathering, and maritime pollution surveillance. 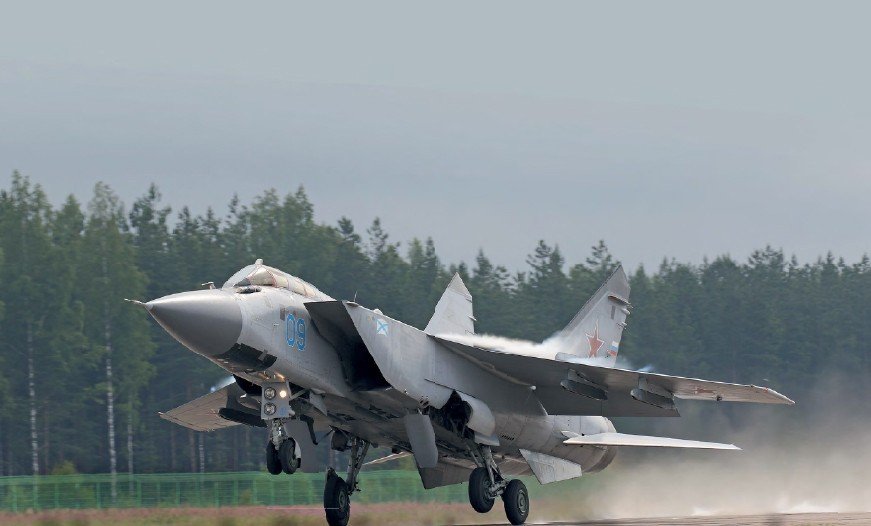 Russian Naval Aviation has two squadrons of MiG-31 Foxhounds, one of which is assigned to the 98th SAP at Monchegorsk, flying the upgraded MiG- 31BM version shown in this shot. Until 2015, the 98th SAP was assigned to the Russian Air and Space Force, and transferred to naval aviation service following the establishment of Strategic Command North, a Russian Navy command that controls all forces based in Russia’s extreme northern regions and the Russian sector of the Arctic. Monchegorsk-based MiG-31BMs were among the first Foxhounds upgraded to production standard and entered service in 2008 and 2009.
All photos Andrey Zinchuk 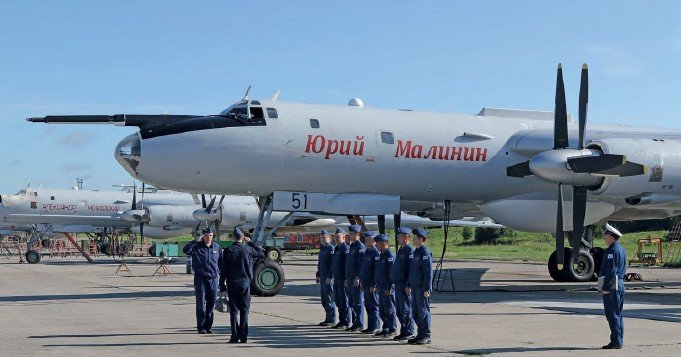 A Tu-142MK crew lined-up in front of their aircraft, ready for flying a rehearsal mission for the parade over St Petersburg.

Tu-142s and Il-38Ns only serve with the Russian Navy’s two so-called big fleets, the Northern and Pacific, in five frontline squadrons. Their principal mission is ASW, which includes search, detection, tracking and, whenever needed, attacking enemy submarines. This specific role also calls for the execution of a significant proportion of real-world operational sorties in peacetime, within the frame of the so-called combat duty patrols in designated areas of interest, often far away from Russian shores.

Operated by three front-line squadrons – one assigned to the Northern Fleet and two more to the Pacific Fleet – the Il-38 May fleet is aged, but still sports good life extension reserves and is also inexpensive to operate and maintain. That’s why most, if not all, of the 28 active aircraft have been slated to undergo a comprehensive mission-suite upgrade in an effort to enhance their overall maritime patrol and ASW capabilities, combined with general overhaul for extending their service. This makes the reworked Il-38N May good for frontline use until the late 2020s or even the early 2030s. As of July 2017, Russian Naval Aviation had received eight upgraded Il-38Ns; seven serve with the two Pacific Fleet squadrons stationed at Nikolaevka (7062nd Air Base) and Yelizovo (7060th Air Base), and the 958th Combat Training and Aircrew Conversion Centre at Yeisk airfield on the Azov coast. The eighth aircraft, the first aircraft upgraded to production standard, is operated by the squadron assigned to the 7050th Air Base, stationed at Severomorsk-3 with the Northern Fleet.

Tu-142MK and Tu-142MZ Bear-F ASW and maritime patrol aircraft (all built in 1980s and 1990s), both derivatives of the Tu-95 strategic bomber, were developed specifically for ultra-long-range oceanic operations, up to 2,475 nautical miles (4,500km) from base. Today’s fleet of around 25 aircraft, is divided equally between squadrons in the Northern and Pacific Fleets.

Up to ten Tu-142MRs, a version built for maintaining communications with submerged submarines using high-frequency and verylow frequency bands, serve with Tu-142MZ and Tu-142MK ASW versions in the two Bear-F-equipped squadrons, one assigned to the aviation group of the 7062nd Air Base, stationed at Kamenniy Ruchey within the Pacific Fleet, and the other to the aviation group of the 7050th Air Base, stationed at Kipelovo with the Northern Fleet.

However, notwithstanding the participation of the Bear and May aircraft, the most exotic type seen was the Be-12. This odd-looking flying boat is still used in the search and rescue and maritime patrol roles by the Black Sea fleet. The twin-turboprop Be-12 Mail serves with the 318th SAP, a composite aviation regiment, stationed at Kacha near Sevastopol in Crimea. No fewer than six aircraft, previously held in storage for many years, were cycled through an overhaul at TANTK Beriev in Taganrog and the EARZ aviation repair plant at Yevpatoria in Crimea between 2012 and 2017 to extend their service life. This has rendered the refurbished amphibian aircraft good for frontline service until the early 2020s.

Four carrier-capable MiG-29KRs were in the air parade, including RF-92320. All four were assigned to the 100th OKIAP based at Severmorsk-3 near Murmansk on the Kola Peninsula. Russian Naval Aviation received 20 single-seat MiG-29KRs and four two-seat MiG-29KUBRs in 2015. The 100th OKIAP was reactivated on December 1, 2015, with its fighters tasked to operate from the sole Russian aircraft carrier, Admiral Kuznetsov, assigned to the Northern Fleet.

Sevastopol in Crimea. No fewer than six aircraft, previously held in storage for many years, were cycled through an overhaul at TANTK Beriev in Taganrog and the EARZ aviation repair plant at Yevpatoria in Crimea between 2012 and 2017 to extend their service life. This has rendered the refurbished amphibian aircraft good for frontline service until the early 2020s.

Some of the newest additions to the fleet were on show in the parade. These included MiG-29KRs assigned to the 100th OKIAP, stationed at Severomorsk-3, part of the Northern Fleet, and Su-30SM multi-role fighters from the 43rd OMShAP, an independent naval attack aviation regiment in the Black Sea Fleet, stationed at Saki in Crimea.

Older jets involved were assigned to the 98th SAP, home-based at Monchegorsk, assigned to the Northern Fleet; one squadron flying upgraded MiG-31BMs and another, equipped with a mixture of Su-24M bombers and Su-24MR reconnaissance aircraft. 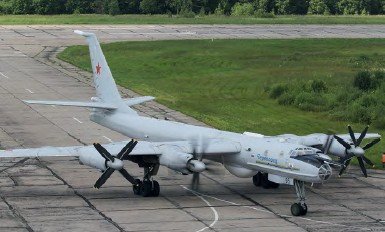 Tu-142MK, side number 95, belongs to the resident squadron assigned to the Kipelovo-based aviation group with the 7050th Air Base headquartered at Severomorsk-1 near Murmansk. Each aircraft in the squadron has its own name, a rare thing in the Russian Naval Aviation. The Bear-F fleet is slated for a major upgrade of its mission suite, including integration of a powerful surface search radar supplied by AO Zaslon, based on the model originally developed for the upgraded Il-38N. 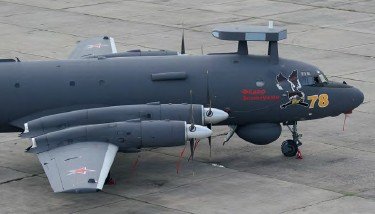 Il-38N, side number 78, carries artwork themed on anti-submarine warfare and serves with the 7062nd Air Base at Nikolaevka near Vladivostok. Russian Naval Aviation’s ultimate intention is to upgrade and extend the service life of its entire 28-aircraft fleet until 2020. Due to a programme delay, completion is not expected before the mid-2020s. 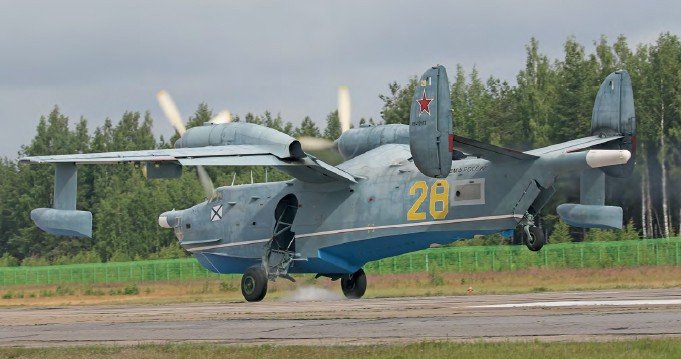 Kacha-based Be-12, RF-12012, is operated in the maritime patrol role over the Black Sea and is also used for a variety of secondary tasks involving the combat training of ship companies. The main mission equipment of the Be-12 is the Initsiativa-2B analogue search radar used for long-range maritime surveillance and offshore navigation. Against large surface ships its detection range is 136 nautical miles, and for detection of a submarine periscope or life raft it offers a detection range of 9 nautical miles. The handful of Be-12s remaining in active service were built in the early 1970s and are expected to remain in the frontline role until the early 2020s.