Three Il-38N anti-submarine warfare aircraft, headed by 19 belonging to the Yeysk centre with 11 from the Northern Fleet’s base at Severomorsk-1 and 23 from the Pacific Fleet’s base at Nikolayevka. Aircraft 19 is now named after Radiy Papkovsky, who headed the Il-38 project for many years and died in 2014. The Il-38N is a midlife upgrade version fitted with the Novella-P-38 mission system. An exceptional feature of the upgrade is a box fairing fitted above the forward fuselage housing the NV9 electronic support measures system.
All photos by Piotr Butowski

RUSSIA’S MAIN naval parade (Glavnyi Voenno-Morskoy Parad) takes place in Saint Petersburg and at the Kronstadt Navy Base, located on an island 30km (18 miles) away. The parade’s air component overflies Kronstadt before Saint Petersburg, routing along the river embankment that affords great views of the flypast.

Morskaya Aviatsiya Voenno- Morskogo Flota (Naval Aviation of the Navy or MA VMF) is the official, but awkward name of Russian naval aviation. It operates about 280 fixed-wing aircraft and 110 helicopters, with 31,000 in its ranks, commanded since August 2010 by Major General Igor Kozhin, Chief of the MA VMF.

Participating helicopters were mostly drawn from the Naval Aviation’s evaluation and crew conversion centre at Yeysk on the Black Sea coast.

The parade was closed by six Su-25 attack aircraft trailing smoke in the colours of the Russian Flag. These aircraft are operated by the Russian Air Force, and not Russian Naval Aviation. 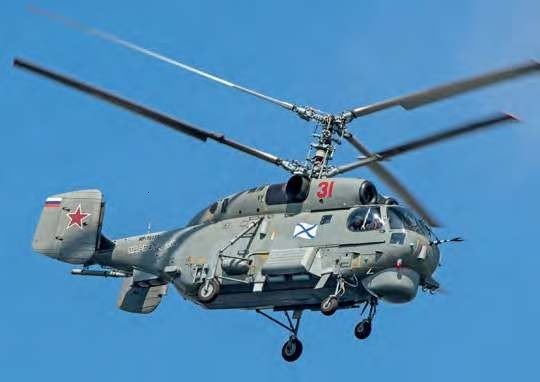 Upgraded Ka-27M anti-submarine warfare helicopter 31 has new sensors and weapons including the Phazotron FHA radar, Kema radio sonobuoy system (named after a river in Russia) and the Ros’-VM dipping sonar. Most of the 22 contracted Ka-27M upgrades are already complete. 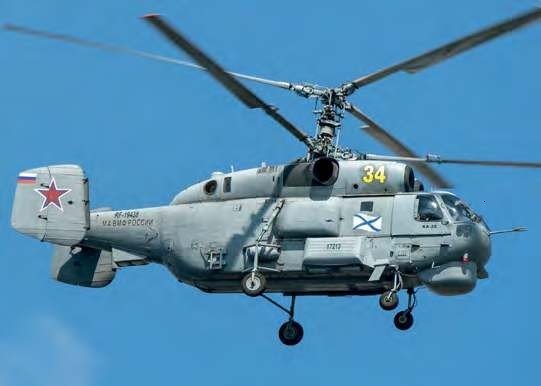 Participation of two Ka-28 helicopters (34, shown, and 37) was unusual. The Ka-28 is an export derivative of the Ka-27 anti-submarine warfare helicopter and is only used in Russia for training foreign pilots at Yeysk.The Ka-28 is easy to distinguish from a standard Ka-27 by additional fuel tanks fitted to the sides of the fuselage. 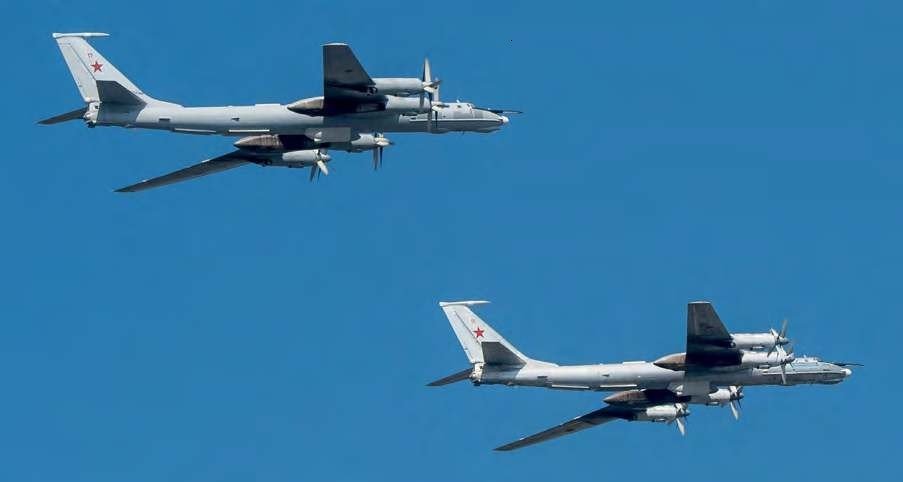 Tu-142MR strategic radio-relay aircraft, seldom seen in public, are intended to ensure a communications link between the national command in Moscow and commanders of strategic nuclear missile submarines. Externally, the aircraft features a VLF radio trailing wire antenna to connect submerged submarines deployed via a ventral pod. For the flypast, Tu-142MR 12 flew with the trailing antenna partly extended by 60m (200ft). The antenna trails by 7,680m (25,187ft) when fully extended with a stabilising cone attached to its end. Both Tu-142MR aircraft, 12 and 17, belong to an aviation squadron based at Kipelovo near Vologda, part of the Northern Fleet. 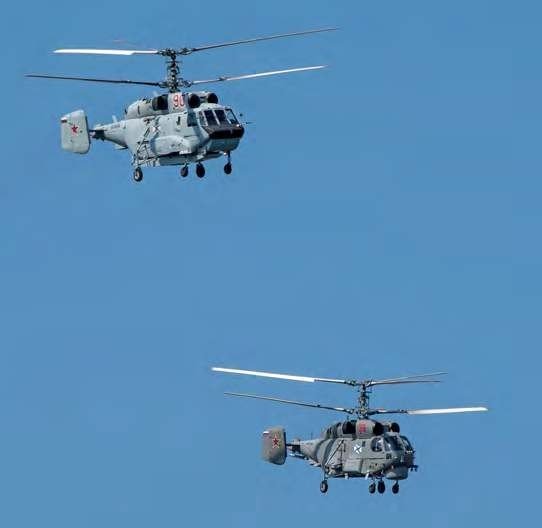 Radar-equipped Ka-31R 90 and Ka-27M 39, headed this year’s air parade over Saint Petersburg on July 29. Ka-31R 90 is one of two (the other is 91) acquired by Russian Naval Aviation in 2012. Twelve such helicopters were listed for procurement in Russia’s National Armament Program through to 2020 for basing at Severomorsk-1 (Northern Fleet) and Nikolayevka (Pacific Fleet). However, no information has been released on any further order. Ka-31R 90 was deployed to Syria on board the Admiral Kuznetsov aircraft carrier between October 2016 and January 2017. 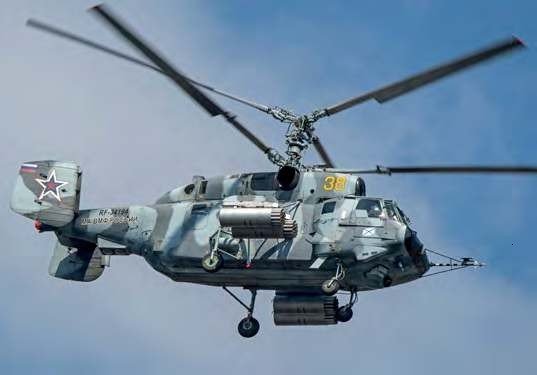 The Ka-29 is a ship-based helicopter designed for delivering assault troops from the ship to shore, and for providing fire support to marine infantry. Between 1984 and 1989, the Kumertau aircraft plant built 59 Ka-29s. For many years, Russian Naval Aviation neglected its Ka-29s, which stood abandoned on airfields following the break-up of the USSR. Today, Russian Naval Aviation has fewer than 20 airworthy Ka-29s in service, each of which has been restored to service as part of programme running since 2016. Ka-29s 38 and 39 assigned to the Yeysk training centre participated in the parade. 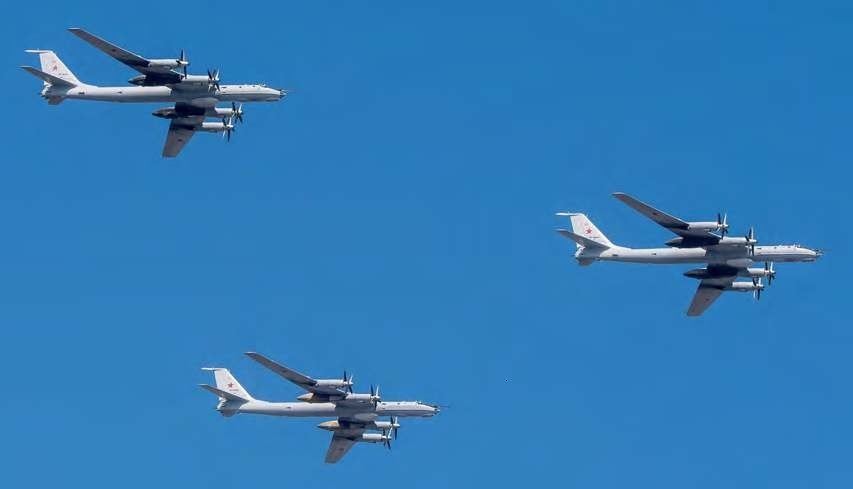 Three Tu-142 antisubmarine warfare aircraft headed by Tu-142MZ 63 from Kamennyi Ruchey (Pacific Fleet) followed by Tu-142MZ 59 from the same base, and Tu-142MK 56 from Kipelovo (Northern Fleet). 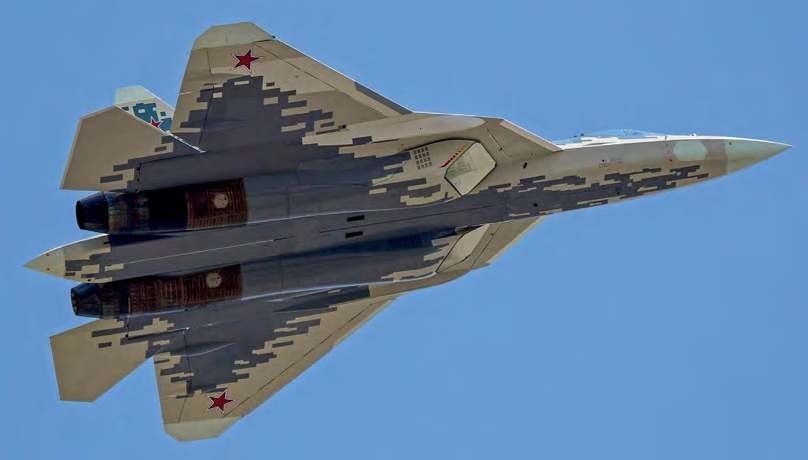 The latest change to the Su-57 test leet is use of this pixelated colour scheme.
Piotr Butowski

Russian Deputy Defence Minister Yuri Borisov announced on July 2 that the Sukhoi Su-57 Frazor ighter would not be going into full-rate production despite what he described as its success in testing and in combat evaluation in Syria. He stated the Su-57’s success meant there was no need to increase production.

Other sources have suggested that the reasons for the decision include the age of the basic 1980s design and issues with the development of the Saturn Izdeliye 30. India’s withdrawal from cooperative ifthgeneration ighter development with Russia in April 2018 and decreasing overall defence spending were also likely motivations for the decision.

Fflight-testing will continue using current Su-57 aircraft. These will be joined by the 12 Su-57s from an order announced on June 30. The first two of these aircraft are to be delivered in 2019 and will be used in a test programme at Lipetsk. On July 16 it was announced that the Su-57 will be used to test technologies intended for an optionallypiloted next generation ighter design. David Isby

The Canadian government, which has been investigating King Air-type aircraft to provide Manned Airborne Intelligence, Surveillance and Reconnaissance (MAISR) support for its Special Operations Forces for several years, announced its intention to acquire three new Beechcraft King Air 350ERs under the US Foreign Military Sales programme on July 12.

According to a statement issued by the Canadian Department of National Defence (DND): “The aircraft will be conigured with military grade advanced sensors, and secure communications equipment. MAISR will have the capacity to be deployed on short notice and will provide the Canadian Armed Forces with better situational awareness on the ground and thus positively afect the ability of commanders to make decisions leading to mission success.” The deal is expected to be signed within twelve months, but delivery dates have not been announced.

The long-anticipated test comparing the close air support performance of the Lockheed Martin F-35 Lightning II with the Fairchild A-10 Thunderbolt II attack aircraft was carried out by the F-35 Joint Operational Test Team on July 5-12 at Marine Corps Air Station Yuma, Arizona.

Congress directed this testing take place as part of the FY2017 National Defense Authorization Act, in response to concerns about the impact on warighting capability of potential A-10 retirement. The tests included multiple simulated and live-ire close air support missions. David Isby

On July 11, Slovakia’s government approved a plan to purchase F-16Vs to replace the nation’s MiG-29 Fulcrums. The $2.91 billion deal, had already been authorised as a Foreign Military Sale on April 3, 2018 by the US State Department.

Ivory Coast’s small Air Force has taken delivery of two second-hand Antonov An-26Bs - a major boost for the Force Aérienne de la Cote d’Ivoire’s leet. The aircraft (TU-VMA, c/n 10103, formerly LZ-ABJ and TU-VMB, c/n 13905 formerly LZ-ABR) were seen transiting Soia, Bulgaria, and Sfax-Thyna, Tunisia, before arriving in Abidjan, Ivory Coast, on July 19 and 23 respectively. The An- 26Bs are a welcome addition to Ivory Coast’s Air Force, which was all but destroyed by France in a retaliatory attack in 2004, and further decimated by the 2011 civil war. Guy Martinz