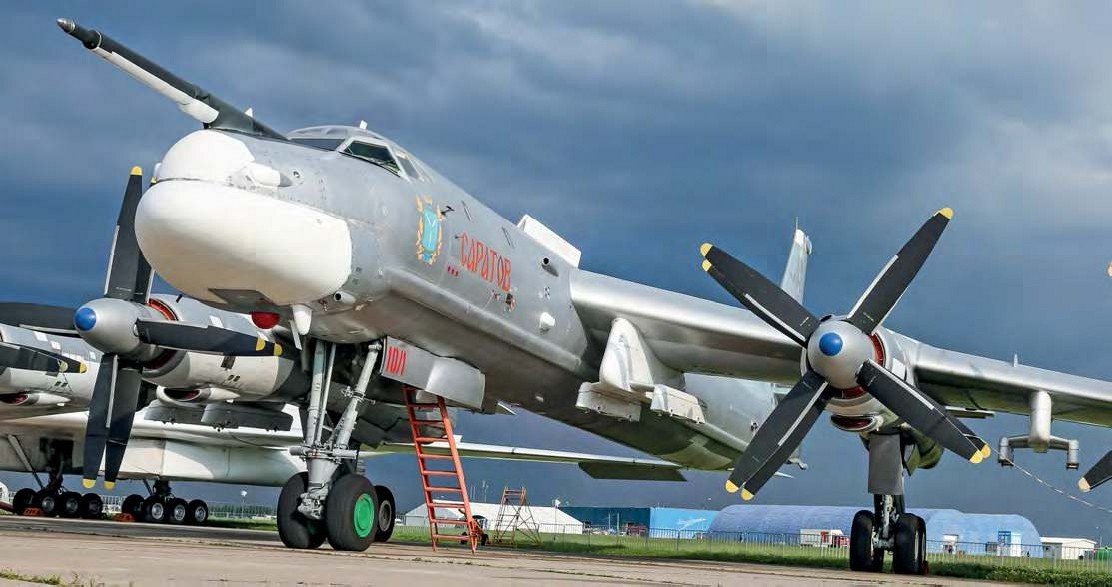 A proportion of the Tu-95MS Bear-H fleet has been cycled through the Phase 1 upgrade; a much greater enhancement to its combat performance will follow in Phase 2, configuring the Bear-H to Tu-95MSM standard. Alexander Mladenov

THE RUSSIAN MoD is planning to sign the contract for serial early warning and control production of the Beriev A-100 Premier newgeneration airborne (AEW&C) platform. That’s according to Yuri Slusar, President of Russia’s United Aircraft Corporation (UAC), parent company of Beriev Taganrog Aviation Scientific-Technical Complex (TANTK Beriev). Slusar told reporters the contract signature is expected by early 2019. In addition, the A-100 is due to begin its state flight testing programme later this year, set to be undertaken at the 929nd State Flight Test Institute. Delivery of the first productionstandard aircraft to the Russian Air and Space Force (RuASF) is expected to take place in 2021 at the earliest.

The A-100 is based on the Il-76MD-90A airframe, equipped with a radar system developed by the Moscow-based Vega Radio Engineering Corporation, and is being developed by TANTK Beriev.

The radar is housed in a dome on struts above the fuselage and features active electronic scanning arrays in elevation, and mechanical scanning in azimuth. Other capabilities include signals and electronic intelligence gathering systems, electronic countermeasures and a sophisticated communications suite.

Dual-band, the radar is advertised as capable of simultaneously tracking up to 300 air, sea and ground targets. Maximum detection range against bombers is claimed as 324 nautical miles (600km), largesize ships up to 216 nautical miles (400km), with a patrol endurance up to six hours at 540 nautical miles (1,000km) distance from its base. The A-100 is also touted as capable of detecting low observable targets, such as stealth aircraft and cruise missiles; the prototype made its maiden light at Taganrog on November 20, 2017.

The A-100 prototype is currently flight testing at TANTK Beriev in Taganrog, but no details have been revealed about the progress of the effort. TANTK Beriev

According to Alexander Konyukhov, Director General of Tupolev, the company has launched development of the greatly upgraded Tu-95MSM bomber. He told Russian news agency Interfax the work is being carried out by Taganrog-based TANTK Beriev, with the first light slated for late 2019. Testing will take up to 24 months and serial production of the upgrade is expected by 2021.

The Tu-95MSM will also feature extended service life and is set to receive the new Kh-50 airlaunched cruise missile, 14 of which can be carried internally and on external pylons.

The MSM coniguration is also earmarked to receive the new Meteor-NM2 self-protection suite with a new-generation radar jammer.

Kuznetsov’s NK-12MPM engine and AV-60T propellers have been undergoing light testing since in April, with the test programme set for completion by the year-end.

Currently, the RuASF Tu-95MS Bear-H leet is being cycled through a small-scale upgrade at Tupolev’s experimental plant at Zhukovsky near Moscow and TANTK Beriev at Taganrog. Known as the Phase 1 upgrade, it was launched in 2009 and provides new avionics (replacing the critical but obsolete systems in the navigation and display systems), new fuel system components and the capability to deploy new Kh-101/Kh-102 ultralong- range cruise missiles, eight of which can be carried on underwing pylons. According to UAC, as many as 13 aircraft were upgraded in 2015-2016, complemented by at least two more aircraft in 2017 and one in 2018. 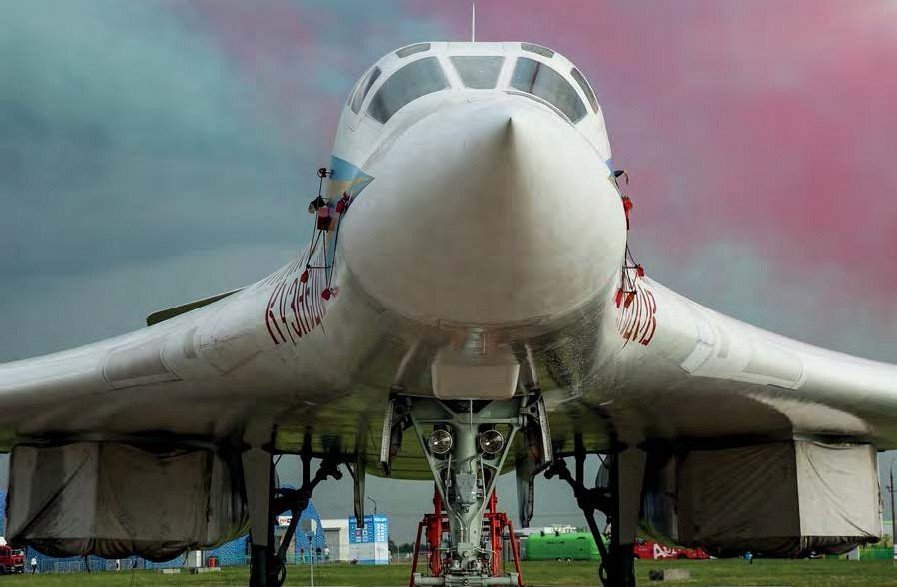 Russia’s An-12 leet is set to remain in service for another ten years. Alexander Mladenov 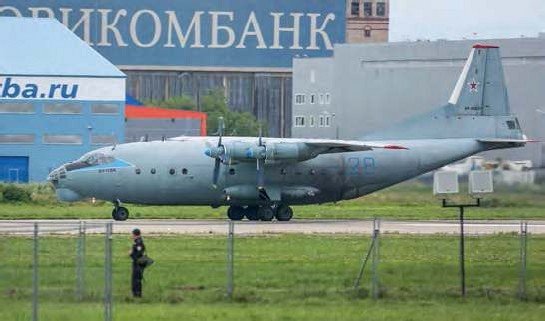 According to Tupolev’s Alexander Konyukhov, Russia’s entire Tu- 160 Blackjack leet is set for a comprehensive upgrade. Flight testing of the first upgraded aircraft, powered by new-build and uprated NK-32 Series 02 afterburning turbofan engines is expected to be completed in late 2018.

The improved NK-32 Series 02 engine features a reduced fuel consumption rate that extends the Tu-160’s range by 540 nautical miles (1,000km). The first pair of new engines, produced at PAO Kuznetsov in Samara, was reported as ready for shipping to the Russian MoD in early June 2018.

According to Russia’s Vice-Prime Minister Yuri Borisov (who was a deputy defence minister responsible for the procurement until May 2018), all 16 Tu-160s in the RuASF inventory are earmarked to be cycled through the so-called Phase 2 upgrade to Tu-160M standard, including a glass cockpit, and all-new navigation/attack and selfprotection suites.

The prototype Phase 1 aircraft, named Valentin Bliznyk, was upgraded in 2006, followed by the first serial production aircraft named Andrey Tupolev that was handed over to the RuASF in December 2014; the latter was completed at Tupolev’s KAPO Gorbunov plant in Kazan. Two more followed: Vasiliy Reshetnikov in January 2016 and Vasiliy Sen’ko in August 2017; and as many as ten more are expected to be Phase 1 complete by 2020.

A new aircraft named Pyotr Deinekin, one that used an incomplete airframe originally built in the 1990s and old-generation avionics, made its maiden light from Gorbunov on January 25, 2018, and is slated for a follow-on upgrade to Tu-160M standard.

The deinitive Blackjack model, dubbed Tu-160M2, is set to be a new-build version manufactured at KAPO Gorbunov; maiden light of the first such variant is planned for 2019. According to Borisov, Tu- 160M2 serial production powered by new NK-32 Series 02 engines should be launched by 2021. Three to four aircraft will be completed each year, with first deliveries to the RuASF planned for 2023.

As many as 50 aircraft are slated, but the first irm contract signed in January 2018 covers only ten at a unit price of RUB 15 billion and assigns all work to KAPO Gorbunov until the end of 2027.

The RuASF, Russian Naval Aviation and Rosgvardia (a militarised internal security organisation formed in 2016) still have more than 60 four-engine Antonov An-12 Cub transports in service; the inal three are expected to be withdrawn from service by 2028.

Thanks to its powerplant and cargo hold, combined with a simple and reliable light control system, the An-12 is still considered a valuable and afordable transport for military transport use.

In addition to general transport weighing up to 20 tonnes, a small number of An-12s are used for electronic warfare and SAR.

According to Pavel Cherenkov, First Deputy Director General at the Ilyushin Aviation Complex, the An- 12 service life has been extended to 55 years.

After the abrupt break in political relations between Russia and Ukraine over the annexation of Crimea in 2014, Ilyushin was appointed by the Russian government as the new design authority for the military-operated An-12s, An-26s and An-124s, and it is now dealing with the life extensions and airworthiness of each leet. The new Il-276 airlifter with a 20-tonne payload, currently in development by Ilyushin and slated to replace the An-12, is not expected to be launched into production before 2025.