When Airlines for Europe (A4E), a new Brusselsbased lobbying association, was formed in January 2016, its goal was to create a single voice for the major players in the industry. Its founding members Lufthansa Group, Ryanair, International Airlines Group (IAG), Air France-KLM and easyJet are the five largest airlines in Europe.

They joined forces for the first time at a crucial moment: shortly after the European Commission published its first ever comprehensive Aviation Strategy and just months before the Brexit referendum. The new organisation was meant to replace the plethora of increasingly divided and ineffective antecedents, such as the Association of European Airlines (AEA) and the European Low Fare Airlines Association.

But not all airlines were happy with the new body. Some were excluded from it by design, as A4E membership is only open to airlines from European Union member states. Others felt they would be marginalised by the industry leaders.

Thus, this summer a new organisation was created. Based on the older International Air Carriers Association (IACA) the new body, called Airlines International Representation in Europe (AIRE), is mostly the brainchild of LOT Polish Airlines and Turkish Airlines.

A4E was created to be a single voice of the EU-based airlines, but by design that came with a number of limitations.

Thomas Reynaert, the association’s Director General and a seasoned Brussels lobbyist, admits some issues were off the table from the very onset. A4E identified matters of concern to all airlines and focused on those where the members’ interests are similar.

This covers many challenging issues. A4E focuses primarily on airport charges (arguing for their lowering), air traffic controllers’ strikes (proposing to curb them through stricter regulation and, importantly, forcing the controllers to announce strikes with a longer notice) and generally airspace reform, including the introduction of the delayed Single European Sky initiative. The organisation also lobbies for the removal of national air taxes which, it argues, hinder air traffic growth and bring little economic benefit to local budgets. 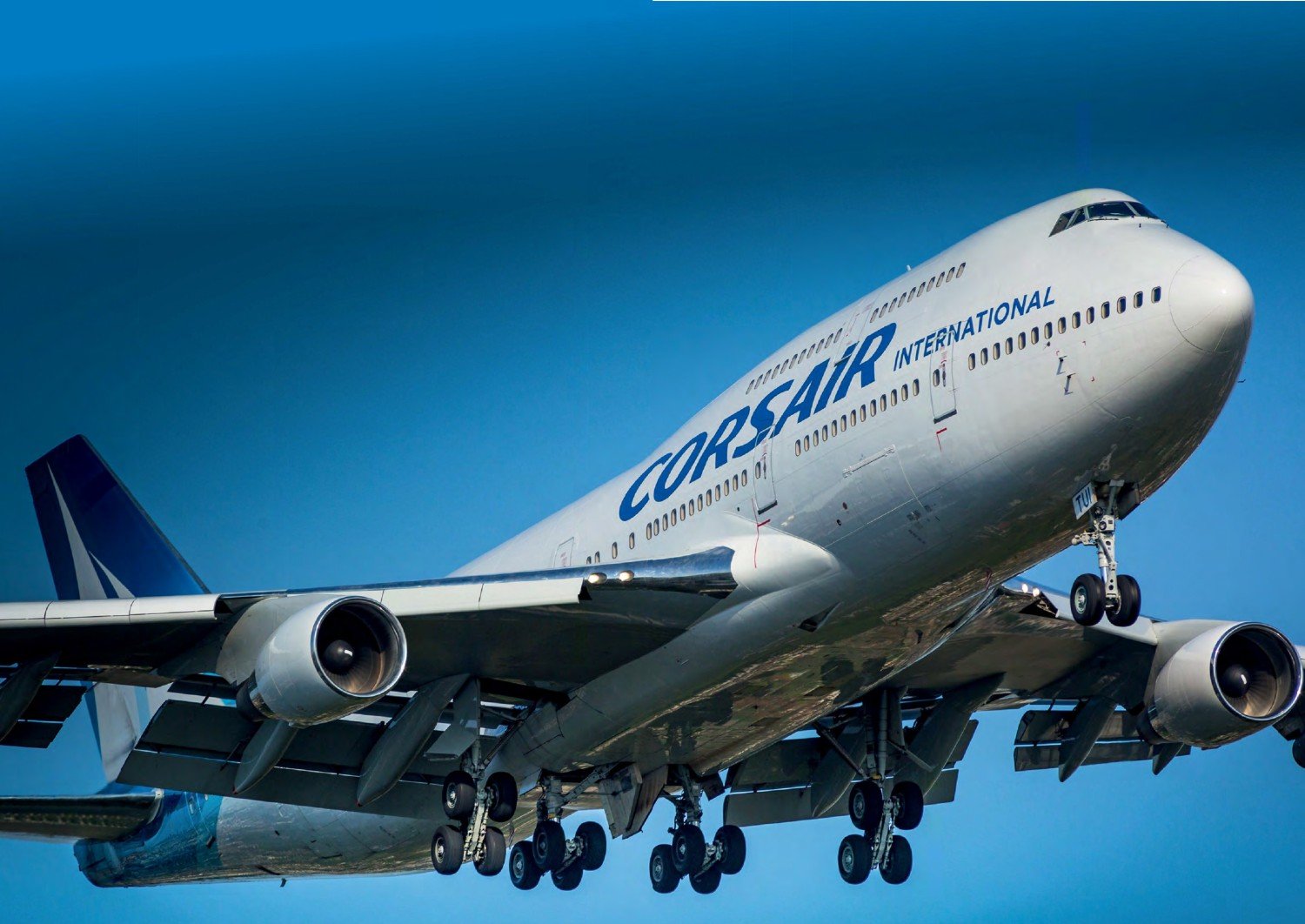 The newly-established Airlines International Representation in Europe includes Turkish Airlines and LOT Polish Airlines but its membership is mainly made up of smaller carriers such as Corsair, whose Boeing 747- 422 F-GTUI (c/n 26875) is pictured departing Paris-Orly.
Paul Marais-Hayer/ AirTeamImages

These are issues central to all airlines and it is easy to get such diverse carriers as Ryanair and Lufthansa on board. Indeed these carriers’ respective Chief Executive Officers, Michael O’Leary and Carsten Spohr, well understand that when it comes to lobbying in Brussels, a strong industry voice matters. The European Commission prefers to talk with one powerful organisation which represents the whole industry rather than a number of smaller players. Because airlines have not had such a single voice for a long time, Reynaert argues their interests were disregarded.

A4E does not discuss matters which could spark conflicts between its members. For example, airline ownership and control rules, a controversial European law which bars non-European investors from owning majority shares in EU airlines, is a non-topic. The regulatory approach towards the Middle Eastern carriers is another, particularly because IAG’s largest single shareholder is Qatar Airways. A4E also does not discuss highly technical yet often minor matters, focusing rather on the larger issues.

Since A4E’s establishment nearly two years ago, a number of other carriers have joined, including Cargolux, the Luxembourg-based freight carrier, low-cost carriers Air Baltic, Norwegian, Jet2.com and Volotea, leisureoriented Travel Service and full-service carriers such as Finnair and TAP Portugal. The membership is by design limited to EU airlines. With such a broad membership and the support of all five major airlines, A4E has indeed become the sole voice of the industry in talks with the European Commission and other bodies.

All equal, but some more equal than others?

This design had a huge appeal for many airlines, but A4E has got many critics, too.

Although A4E brought together the major carriers in one room for the first time and then managed to broaden its membership to a dozen airlines, some industry players see it as dominated by the biggest airlines. In theory, every member of A4E has got an equal say, but some representatives of medium and small-sized airlines explain their reluctance to join the organisation by the perceived bias towards the issues that matter for the big five.

Other critics point out the unclear mandate of A4E. As a Brussels-based lobbying organisation, it makes the most sense for it to focus on issues for which the European Commission is responsible. However, out of A4E’s three core topics only one, the airport charges directive, is an EU issue. Neither air traffic controllers’ strikes nor national aviation taxes are the EU’s responsibility. Critics point out that trying to lobby for solutions to either of those problems in Brussels is pointless, although they readily admit it does increase awareness of these issues.

Another critique relates to the limited membership, from which some key players in the region, such as Turkish Airlines or Aeroflot, are excluded. A4E argues it makes sense to have only EU members when dealing with the EU institutions, but the critics point out Turkish Airlines and Aeroflot are respectively the sixth and seventh-largest European airlines and not having them at the table substantially lowers the impact. For 18 months, the critics of A4E had no viable alternative. The only other remaining organisation, after AEA was finally formally wound down at the beginning of 2017, was the European Regional Airlines Association, a body with an entirely different focus and membership.

This changed in the summer of 2017 when, much to the surprise of many industry players, a new organisation was launched.

A breath of fresh AIRE

AIRE is not an entirely new organisation; in essence, it is a revamped IACA with a new name. Most of the members remain the same, Sylviane Lust is still the organisation’s Director General, and even the inner structure has not changed much. But it is not just the name that has changed; AIRE has also acquired two powerful new members.

Turkish Airlines is by far the largest non-EU airline which is interested in dealing with Brussels. Aeroflot, strongly protected by the national government which has no warm feelings towards Brussels, sees limited value in lobbying the European Commission.

LOT Polish Airlines might not be the biggest airline, but with more than 20% growth, it is one of Europe’s most dynamic.

Lufthansa is one of the big five European airlines which in January 2016 formed Airlines for Europe, a new Brussels-based lobbying association to create a single voice for the major players in the industry. Here A350-941 D-AIXC (msn 87) is pictured at Tel Aviv.
4x6zk-moni shafir/AirTeamImages

The Polish carrier was also the driving force behind the creation of an opposition to A4E, as it is oriented strongly against Lufthansa and other major carriers. Rafał Milczarski, LOT’s Chief Executive Officer, believes the airline is powerful enough to be a player in its own right and wants to have a big say in the association. Milczarski will become AIRE’s CEO next year.

Other members of AIRE include a mix of airlines with no clear focus. The association’s predecessor, IACA, gathered mostly leisure-oriented carriers. The likes of TUI Fly, Spanish Wamos Air, Italian Blue Panorama Airlines, Portuguese EuroAtlantic Airways and French Corsair still constitute the majority of the members. The Dutch low-cost Transavia, a member of the Air France-KLM Group, is an odd addition, given its parent company’s status as the founder of A4E.

Sylviane Lust says AIRE might not have any major EU carriers as members, but argues it is at least a democratic organisation. A voice of every member matters in her organisation, she says, clearly alluding to the alleged domination of the big five in A4E. She adds that AIRE will capitalise on its technical expertise and work with lower-level Commission officials, focusing on smaller, but nonetheless crucial issues alongside the bigger political debates. Lust further stresses that AIRE is more of an expert-based body rather than a pure lobbying organisation and plans to work together with the legislators instead of simply trying to influence them.

While having a larger association for political issues and the biggest players, and a smaller one concerned mostly with technicalities could make some sense, industry experts are critical.

One veteran EU lobbyist, speaking off the record, pointed out that such a setup only weakens the voice of the industry. And now, with Brexit looming, a single position of the entire industry is badly needed. Airlines might be among the biggest losers of a socalled hard Brexit, since if there is no new trade deal between the UK and the EU in force on the day of the divorce, effectively no flights between these two entities will be possible. Air traffic rights are not subject to World Trade Organisation rules, so the default setting is a ‘closed’ sky. There is no air traffic treaty between the UK and any of the other EU countries; there was no need for such an agreement since all these states were subject to the EU Open Skies regime. This might end in 2019, though.

For A4E and some of its largest members, Brexit is an increasingly urgent issue. Negotiations for the new air traffic rights regime have not yet started, and for many airlines this might soon become a strategic problem. UK-based easyJet, British Airways owner IAG and Ryanair, heavily dependent on UK-EU traffic, are loudly calling for a quick resolution of this issue.

On the other hand, AIRE is much less focused on this problem. Except TUI Airways (the former Thomson Airways) the association has no UK-based members, and even for this leisure-focused airline traffic rights to the EU, perhaps with the exception of Spain, are not a key problem.

Another Brussels-based analyst questions whether AIRE can be efficient at all. It is a much smaller organisation with little clout in comparison to A4E. Furthermore, the analyst adds, IACA has had a poor reputation in Brussels and this image lingers behind AIRE. Finally, it remains to be seen how seriously the European Commission will treat a Brussels-based organisation of which the key members, namely Turkish Airlines and Ukraine International Airlines, are non-EU airlines.

Many analysts agree A4E might not be a perfect match for many smaller airlines, not to mention the non-EU carriers, but one experienced lobbyist suggests another approach would have been more successful. LOT Polish Airlines should have waited out another couple of months and then slowly dragged other similarly-sized airlines from A4E. The likes of Finnair, TAP Portugal, Air Baltic and Aegean Airlines by then may have become disillusioned by the big five-dominated A4E and be happy to join a new body.

Now, however, the foundation of AIRE seems like a hastened decision. The association’s membership is limited, its political clout weak (particularly given both Turkey’s and Poland’s poor relations with the European Union officials).

It has stirred the Brussels airline lobbying microcosm, and it does have a potential to develop into a larger organisation countering the A4E narrative, but so far it seems to be a largely empty change.