Austrian Airlines is the fastest-growing airline in the Lufthansa Group, but it is not yet profitable enough to warrant new aircraft. Andreas Spaeth reports

“We are the only airline within the Lufthansa Group without one single aircraft on order,” said Austrian Airlines’ Chief Executive Offcer Alexis von Hoensbroech.

And this is despite Austrian now being the fastest-growing carrier within the German-led airline group, in which it is also its smallest long-haul carrier. Operating just 12 aircraft for intercontinental routes, within the Lufthansa Group it is even smaller in this respect than Brussels Airlines.

Ten years ago, Austrian Airlines (AUA) was almost bankrupt, in 2008 amassing losses of almost €430 million before Lufthansa took over in 2009. A decade on, it’s a different picture: AUA had a record year in 2017 and it has been profitable for six years.

Von Hoensbroech, who joined Austrian from Lufthansa in August 2018, knows better than most why AUA isn’t going to get new aircraft yet as he was the executive who oversaw the integration of Austrian into the group in his former job. Vienna, Austria’s capital and Austrian’s hub, is one of four Lufthansa Group hubs but it is the smallest, resulting in lower yields and revenues for Austrian compared to the other group carriers.

Von Hoensbroech explained to AIR International: “We have to achieve a status where we are considered worthy for investments within the group. Currently we only earn a margin of 4% of EBIT [earnings before interest and taxes], that is about half what other airlines in the group are making. This gap doesn’t make it easy to attract investment to AUA and we have to see how to bridge the gap.”

Austrian’s 85-aircraft fleet is getting older, with an average age of 16.5 years. That is especially true for the long-haul sector, where the airline flies six Boeing 767-300ERs (average age almost 23 years) and six 777-200ERs (average age almost 18 years). There has been a streamlining of the fleet in recent years, with Fokker 70s, Fokker 100s, Dash 8-300s and Boeing 737s all withdrawn from service.

It is not clear if the long-haul fleet will be renewed first. Von Hoensbroech stressed: “We have to have good arguments, new Boeing 777s would surely be an option. But only if our long-haul routes are delivering high enough margins would Lufthansa be tempted to make these investments in AUA. Currently that’s not the case, yet, but we don’t have extreme urgency. Also, the mostly depreciated elderly fleet gives us more flexibility in a possible downturn.”

Today AUA has the lowest production costs with the Lufthansa Group. Von Hoensbroech said: “That’s the result of many years of cost savings but facing lower revenues in Vienna we also need lower costs.”

Some new aircraft can be resourced from inside the group, such as the 17 Embraer 195s now operated by Austrian which formerly flew with Lufthansa CityLine. These are now AUA’s youngest aircraft, with an average age of just seven years. Von Hoensbroech acknowledged: “But in general we have rather too few than too many aircraft in the group.”

Traditionally AUA has relied on connecting western Europe and the world via Vienna to central and southeast Europe, a region where the airline still serves 35 destinations, more than any other carrier. One-third of AUA’s destinations are located to the east of Vienna and 120 out of a total of 400 daily flights head to central and eastern Europe.

After Air Berlin’s market exit, many lowcost carriers (LCCs) have sprung up in force at Vienna airport, from easyJet to Level and Wizz Air, and with Eurowings, AUA even has a competitor inside the group to which it belongs. The hub model for intra-European flights is under strong pressure from LCCs offering point-to-point services, bypassing traditional hubs. 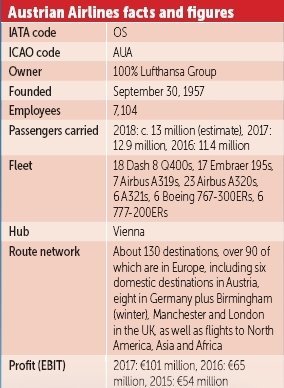 Von Hoensbroech observed: “It used to be that you would change aircraft on the way from Bucharest to Nice, but today these are mostly non-stop flights by low-cost airlines. Transfer traffic is weakening, but we can’t just exit this segment as we need to feed our long-haul services with it.”

The pressure under which the management finds itself is reflected in the volatile route network, especially on long haul. Here AUA serves a range of mostly tourist-oriented seasonal routes in the Indian Ocean during the European winter. But several year-round services to major hubs are also flown, which have been repeatedly altered. Hong Kong, Havana and Colombo were given up, while frequencies to Tokyo have increased. Cape Town was taken up as a seasonal destination during the European winter after a hiatus of 19 years.

Von Hoensbroech said: “Of course Johannesburg would have been the more important destination in economic terms, but to serve it we would need more frequencies.” But to do so AUA needs more aircraft, and the airline simply lacks the necessary numbers. Due to its limited fleet size, AUA must very thoroughly determine where it can utilise its aircraft best and when, meaning it has many more seasonal destinations than other scheduled airlines. 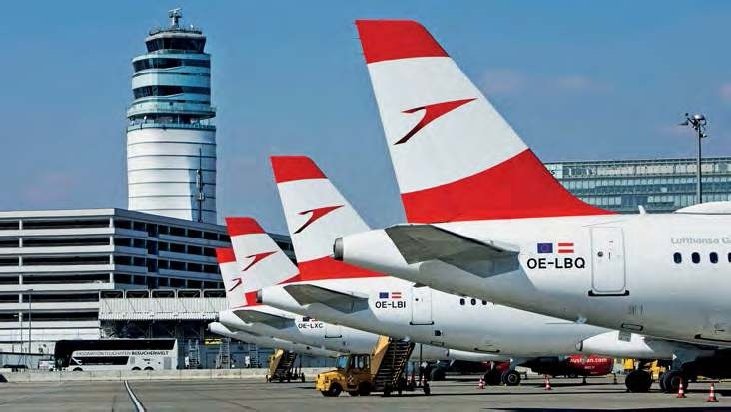 Traditionally AUA has relied on connecting western Europe and the world via its Vienna hub, a model which has come under pressure from low-cost carriers offering point-topoint services, bypassing traditional hubs.
Michele Pauty/Austrian Airlines

Despite its ageing fleet the passenger product, especially in business class on long haul, is top notch at AUA and considered to be the best within the Lufthansa Group and also among the wider industry.

With its in-house caterer Do & Co, Austrian has a chef on board long-haul flights. The lavishly-appointed antipasto trolley is a trademark of the Austrian carrier as is the ‘Viennese Coffee House above the clouds’, a specialty coffee menu offering ten signature coffees prepared freshly on board.

Well aware the packaging of an airline product is important, AUA is currently introducing a revamped livery on its aircraft, featuring a boldface ‘Austrian’ logo covering the whole forward fuselage above and below the windows, as well as adding more red to the tail design. Many observers find the new AUA branding, done in-house for a modest investment, much more effective than the multi-million Euro rebranding of mother carrier Lufthansa.

Von Hoensbroech said: “We are used to [dealing] with turbulence and I am optimistic to bring AUA to a new altitude.”