There’s been a revolution in helicopter search and rescue in the UK in recent years. Mark Broadbent looks at the S-92 and AW189 used by Bristow Helicopters

The new arrangement began in April 2015 after the Department for Transport (DfT) in 2013 awarded Bristow a 25-year contract to provide helicopter SAR on behalf of the Maritime and Coastguard Agency (MCA).

The contract covers the provision of SAR to respond to all incidents for the whole of the UK, as well as the helicopters, crews, maintenance and ground facilities. Bristow now operates ten strategically located helicopter SAR bases around the UK, at Stornoway (Outer Hebrides), Sumburgh (Shetland Islands), Inverness, Prestwick, Caernarfon, Humberside Airport, St Athan, Newquay, Lee-on-Solent and Lydd.

It is a busy service. According to UK Government statistics, there were 2,594 civilian helicopter SAR taskings in the UK for the year ending March 2017. The data for April to June 2017, the latest available at the time of publication, shows 444 people were rescued and a further 137 people assisted. 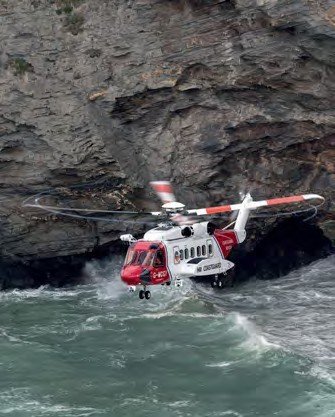 The helicopters operate in a range of environments and the S-92’s stability in rough conditions is praised.
Bob Sharples via Bristow Group

The move to privatised helicopter SAR in the UK has taken a couple of years to complete. Humberside, Inverness, Caernarfon, Lydd and St Athan became operational in 2015, Prestwick and Newquay in 2016, Lee-on- Solent and Sumburgh in April 2017 and finally Stornoway in July 2017. At each base there are two helicopters, nine pilots, ten rear crew, ten engineers, an administrator and a stores person.

The S-92 is a mature product, having first entered service with the MCA in 2007, but the AW189 is newer. It first flew in 2011 and was certified by the European Aviation Safety Agency in 2014, and Bristow was the launch customer in Europe.

In 2015, issues with the ice protection system were reported to have delayed the AW189’s service entry. Bristow told AIR International: “The delivery of any new platform in commercial or SAR operations is always a protracted process. We carried out a full operational evaluation of the aircraft, making sure it met the MCA’s contractual specifications, and that we were comfortable to introduce it into the UK SAR environment. We carried out a 12-month operational evaluation of the aircraft and its systems, working closely with the manufacturer and the Civil Aviation Authority [CAA] to ensure everyone was content for the aircraft to be deployed operationally.”

However, the transition has involved more than just new helicopters. Bristow also recruited extensively from the ranks of former Royal Air Force and Royal Navy crews and engineers who previously served on SAR duties; 70% of its crews are ex-military. The company also invested approximately £7 million at each new base constructing facilities and it is in the process of upgrading the existing Bristow and MCA facilities at Sumburgh, Stornoway and Lee-on-S olent. 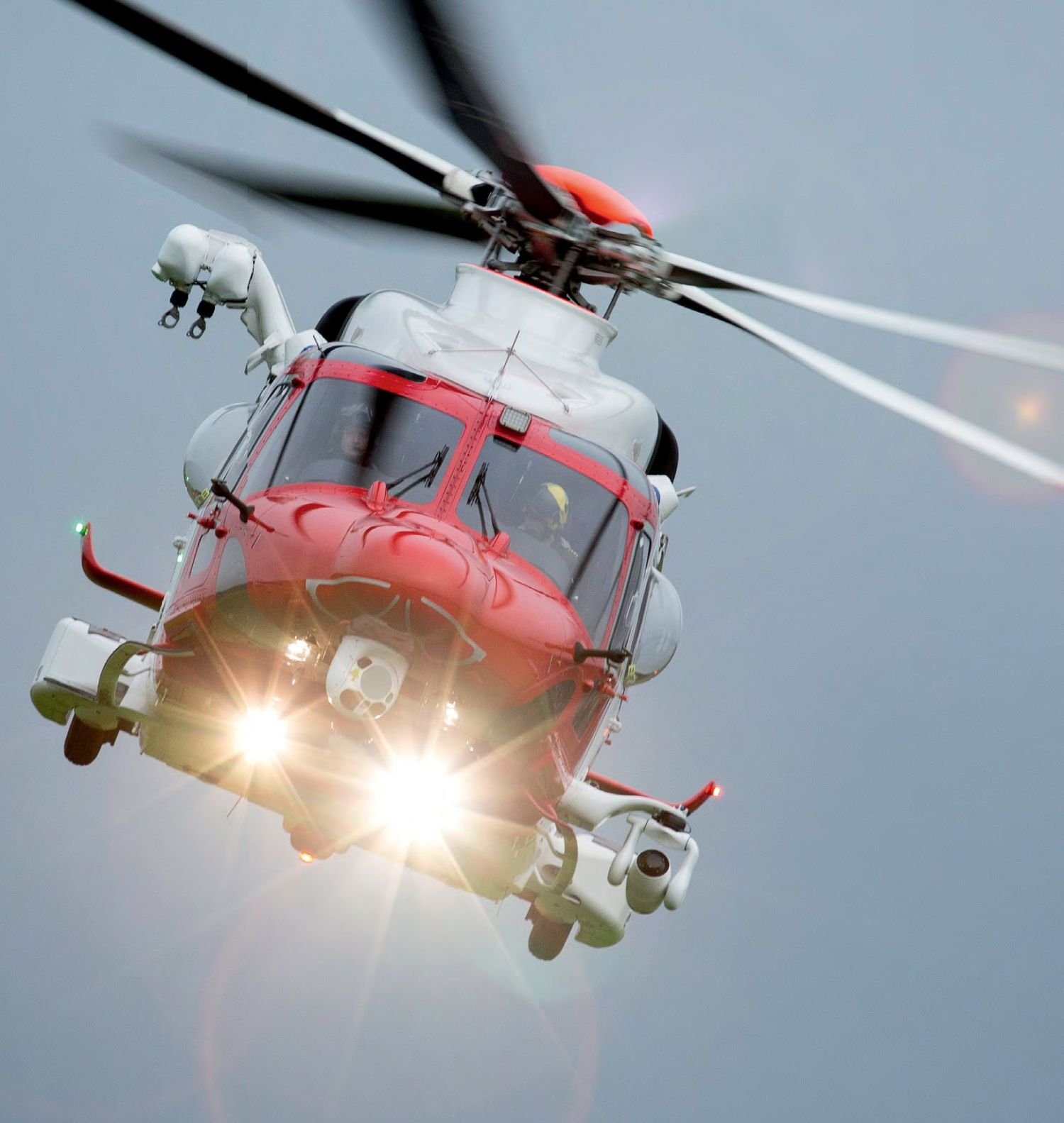 Issues with the ice protection system were reported to have delayed the AW189’s service entry but a 12-month operational evaluation carried out by Bristow has ensured the type has met the Maritime and Coastguard Agency’s contractual specifications.
Leonardo Helicopters

The requirements explain the basing arrangements. The S-92s are at Stornoway, Sumburgh, Caernarfon, Humberside and Newquay, where the type’s longer-range suits the extensive overwater areas covered from these bases; the AW189s are operated from Prestwick and Lee-on-Solent, with Lydd, St Athan and Inverness due to transition to the AW189 during 2018.

A notable feature of the S-92 is its automatic fiight control system functionality with automatic approach to hover/automatic departure. Captain Ben Clarke, Chief Pilot of the Stornoway base, explained: “This allows us to descend from forward fiight down to 200ft [60m] and 80kts [148km/h] and then to the hover; it’s got full autohover, so it will hold a geographic position. It allows us to track a moving vessel and hover relative to a moving vessel.

“If you’re winching a life raft from the water where the pilot has got very poor vision, the winch operator can control the hover and move the aircraft forwards or backwards and left or right, so the winchman is plumb over where he needs to be. That’s well liked and reliable and it makes our job so much easier.”

Bristow’s S-92s and AW189s have the FLIR Systems Star Safire 380HD turret, which has forward-looking infrared (FLIR), high-definition and low-definition full-colour cameras with high-detail zoom capabilities. (The cameras can read a computer screen from half a mile/0.8km away).

There is a customised stretcher stowage and plinth installation. On the S-92 this features a raised box on to which a stretcher is lifted. This is designed, Bristow told AIR International, “to reduce the physical strain on rescue crews, and ensures the casualty is not too close to the floor. The plinth also makes CPR easier, as the casualty is not on a softer bed surface. Custom-designed stowage allows for medical gases, equipment, ECG, defibrillator, saline drips, etc.” 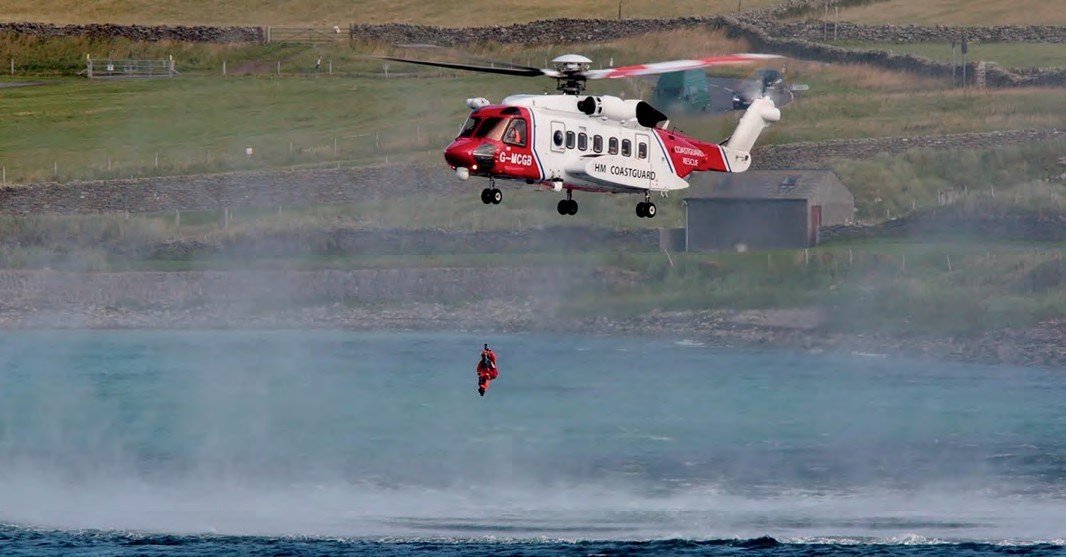 One especially well-liked feature of the S-92 is the ability for the winch operator to control the hover and move the aircraft forwards or backwards and left or right.
Andy Walker via Bristow

The rear crew use a Euro Avionics EuroNav 7 console, which displays tactical navigation and digitised Ordnance Survey and military maps. This console also features an automatic identification system transponder to track vessels and displays pictures from the Star Safire turret.

Night Flight Concepts’ Gen 3 Autogated Night Vision Goggles (NVGs) are another notable feature. Bristow said: “These are absolutely the cutting edge. Aside from the United States military, we are the only organisation that has been given access to the technology for operational use.”

They offer significant advantages. Bristow continued: “The previous models are looking for light to display to the user. If you were to stand 50ft [15m] away from someone who lit a cigarette, you would experience light swamping or blooming, which is a blinding effect. The Gen 3 model uses a method of rapidly switching on and off its display system, which avoids blooming.

“They also enhance the image in a situation where there is less ambient light. Given the risk our crews face when operating at night, it makes sense to have that level of technical capability; we don’t want our aircraft and crews running into something in the dark.”

Bristow said attaining NVG certification “was probably our biggest challenge”, as a CAA-approved NVG syllabus for Gen 3 NVGs had to be created from scratch. Here the experience of the company’s ex-military, NVG-qualified pilots was critical. 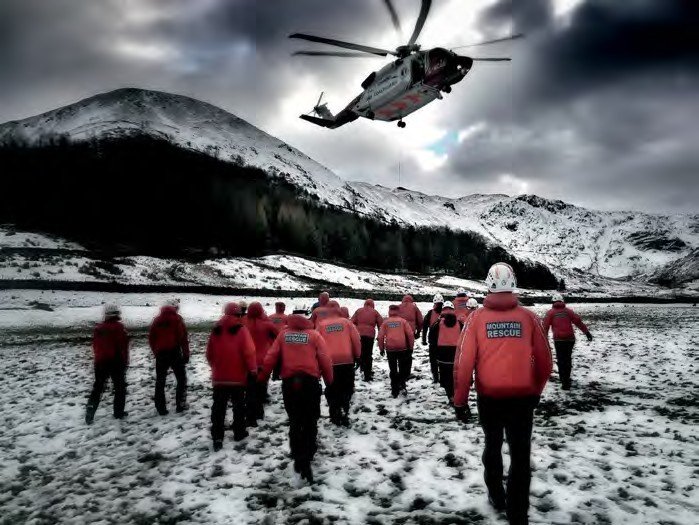 Close co-operation with a range of organisations is vital to the service and training, as seen here in Scotland with a mountain rescue team, are regular events.
Rob Sharples via Bristow Group

Clark said: “Our crews who used NVGs in the military say what we’ve got is better than what they trained on in the UK military.”

Bristow is EASA Part-145 approved, so as well as day-to-day servicing its teams can change engines, rotor blades and transmissions. The company has all the ground equipment and tools required to maintain both types of helicopter up to, but not including, base maintenance. Only when maintenance events beyond its capability will the helicopters go to the manufacturer: for example, if an issue is discovered that requires the use of a structural jig.

Each helicopter has four crew members for a mission: a commander, a co-pilot and two technical rear crew (a winch operator and a winchman/paramedic).

There are various pilot training streams depending on an individual’s prior experience. If not type qualified, pilots will undertake a type conversion course and then an Operator’s Conversion Course (OCC), before completing a specialist line training course that embraces all aspects of SAR.

Pilots are only declared operational once they complete line training. Rear crew undertake conversion training with Bristow, following a similar process to the pilots with line training adapted to individuals’ specific roles.

The Aberdeen facility has a fully certified simulator and is a CAA-approved Authorised Training Organisation to undertake type training for pilots, rear crew and engineers.

At each HM Coastguard base, there is a duty crew – comprising two pilots (commander and co-pilot), two technical crew (winch operator and winch operator/paramedic) and two engineers – on shift for 24 hours from 13:00hrs.

Between then and 22:00hrs the crew scramble within 15 minutes and between 22:00hrs and 08:00hrs they are in standby hours, during which time they scramble within 45 minutes. From 08:00hrs it’s back to 15 minutes’ readiness again, until the relief crew arrives at 13:00hrs. Those who have been relieved are then off duty for 24 hours.

The pilots and rear crew are governed by flight time limitations. If pilots meet their maximum flying time they need to take a couple of days off before returning to the regular shift pattern. Engineers organise their shifts so they work six-day rotations. 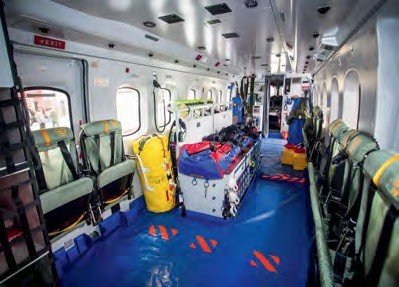 A customised stretcher stowage and plinth installation for casualties on the S-92 features a raised box on to which a stretcher is lifted to reduce the physical strain on rescue crews, and ensures the casualty is not too close to the floor.
Geraint Thomas via Bristow Group 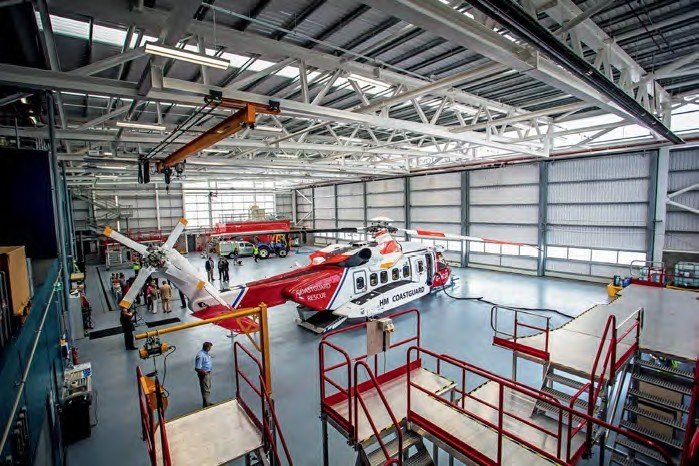 Bristow has invested £7 million in each new base, such as this one pictured here at Caenarfon.
Geraint Thomas via Bristow Group

In addition to being on call, flight crews at each base undertake currency training. Clarke explained: “We have a rolling currency system [of] the various techniques associated with each of the roles we’re likely to encounter on a day; we’ve got maritime, overland, mountains and NVG/night to consider. We’ve got between 20 and 30 different items; we’ve got day winching to the deck of a moving vessel, winching to drifts, doing various scenarios in the mountains.

“Each is attributed a currency and you have to do so many evolutions in so many days or hours or minutes. We’ve got a training allowance of 50 hours per month for the base and the crew will decide what currency item needs addressing and the captain will come up with a sortie that will make sure crews keep current.”

There is understandably close cooperation between Bristow and the RNLI, HM Coastguard, mountain rescue teams and the police, ambulance and fire services; the helicopters regularly exercise with the RNLI and mountain rescue, for example.

The practice pays off. Just a couple of days before AIR International’s interview, Clarke had flown an S-92 in challenging conditions.

He said: “We were flying in the mountains on Skye in quite a tight gulley. It was nice having the S-92’s robustness and stability. You tend to get bounced around in the mountains but it was stable. Hovering at 3,000ft [914m] against the downwind cycle coming off the ridges was a tight spot, but we got the aircraft in there and the casualty out.”

Clarke reported satisfaction with the equipment Bristow is now providing for UK SAR: “Everyone loved the Sea King, but it was of an age. The guys who flew the Sea King look back fondly, but if you gave them the option of one or the other they would take what we’ve got now.” 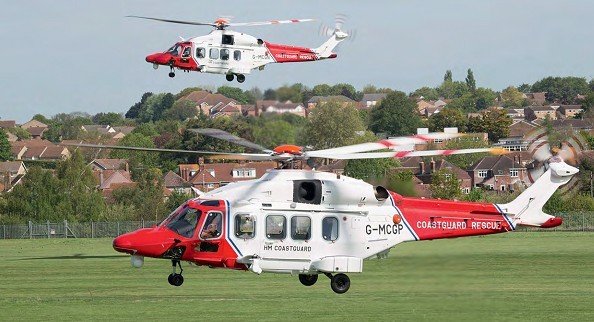 Bristow operates search and rescue helicopters from ten bases around the UK for the 25-year UK SAR contract, with two helicopters at each base. The AW189s are currently operated from Prestwick and Lee-on- Solent.
Maritime and Coastguard Agency