New Mounts for the Knights

Today, the last remaining fighter unit in the Ratno Vazduhoplovstvo i Protivvazduhoplovna Odbrana (RV i PVO, Serbian Air Force and Air Defence) is 101. lovačka avijacijska eskadrila (lae, Fighter Aviation Squadron) – also known as the ‘Vitezovi’ (Knights) – based at the Batajnica Air Base near Serbia’s capital, Belgrade.

The 101. lae is part of the 204 vazduhoplovna brigada (vbr, or Aviation Brigade) at Batajnica and is responsible for maintaining quick reaction alert (QRA) with two MiG-29s on constant 24/7 readiness for its main task, which is air policing duty over Serbia.

A Legacy of Former Yugoslavia

The former Yugoslavia became the first European MiG-29 user after acquiring 14 MiG-29 single-seat fighters (the downgraded 9-12B export variant, the Fulcrum-A) and two MiG-29UB two-seat trainers (Fulcrum-B) back in 1987-1988. However, 11 of these aircraft (including a MiG-29UB) were lost to NATO during Operation Allied Force, launched against Serbia in 1999. The surviving four MiG-29s and one MiG-29UB were permanently grounded due to their poor technical condition in the spring of 2004.

In June 2006, these aircraft were inherited by Serbia and it was soon decided to reactivate them. On December 22 that year, a €22 million agreement for an overhaul and a modest modernisation was concluded with RSK MiG, but due to lack of funds only four of the aircraft were included in the upgrade. The engines and many components and subassemblies were sent for overhaul to Russia, with airframe disassembly and assembly carried out at the Moma Stanojlović aircraft repair plant (ARP) at Batajnica with the help of Russian specialists.

By then, the total cost of the overhaul and modernisation programme had reached €27 million. The aircraft received modern ICAOcompatible navigation and communication equipment, the old IPV-2 display was replaced by the multifunctional MFI-54 display. The life of the aircraft was extended for 700 hours or ten years of service. In addition, as part of the deal, a certain amount of spare parts was delivered along with eight R-27R1 air-to-air missiles and a simulator. 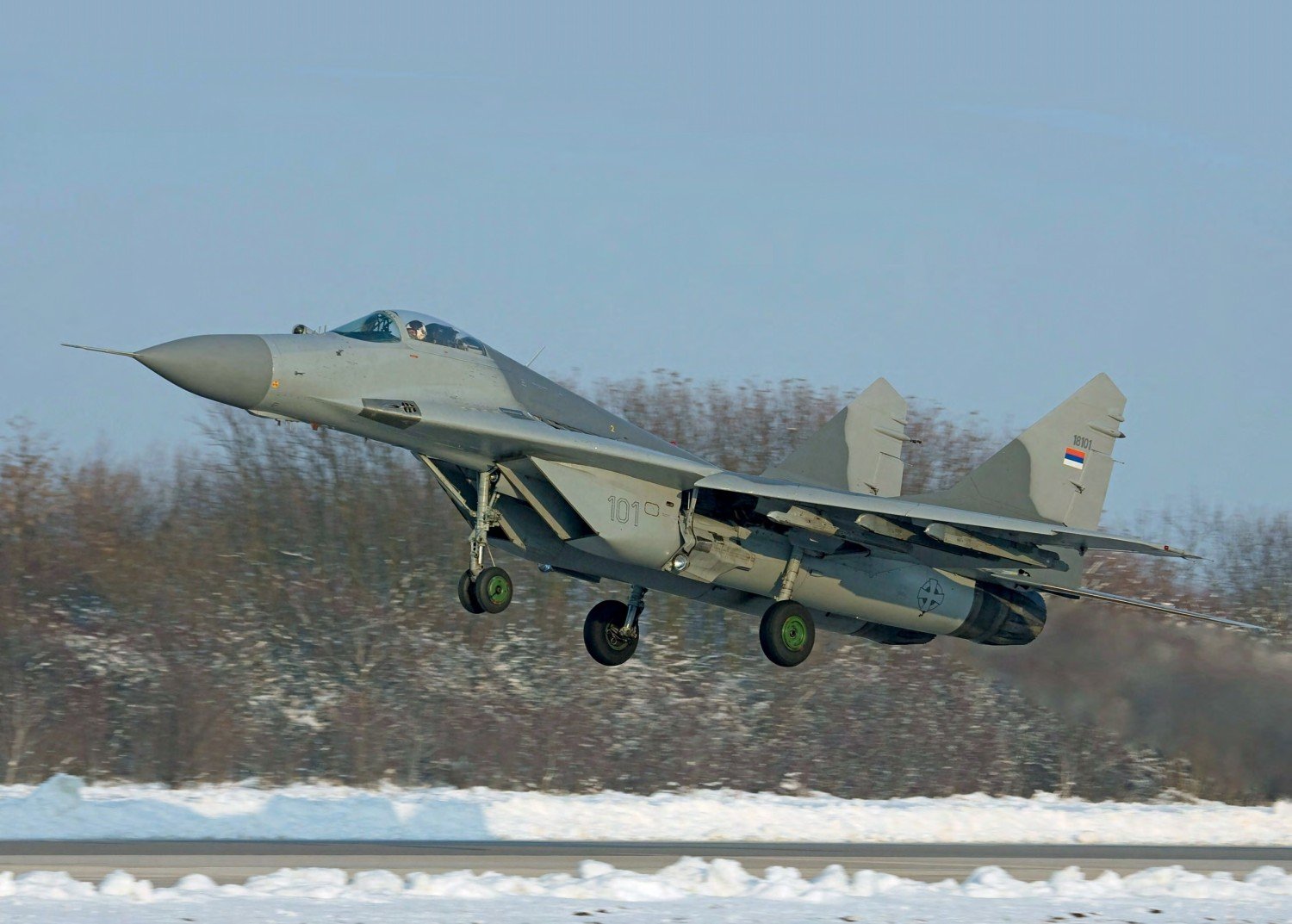 MiG-29 18101 was the first aircraft to come out of overhaul in 2008 and is seen taking off from Batajnica Air Base on a regular training flight in a winter setting in mid-February 2009. Due to a serious technical defect, this aircraft has been grounded and inoperative for some time now.
All photos Dimitrije Ostojić

When its last MiG-21bis Fishbed-L fighters were withdrawn from active service in late 2015, 101. lae began experiencing serious difficulties in maintaining a QRA pair on constant alert: not a surprise, as it was now down to only four MiG-29s and three MiG-21UM Mongol-B two-seat trainers. The situation was actually far more serious, as only one MiG-21UM has sufficient resources remaining to continue service (16185, built in December 1986 and overhauled in 2016) and one single-seat MiG-29 (18101) has been inoperative for some time now. 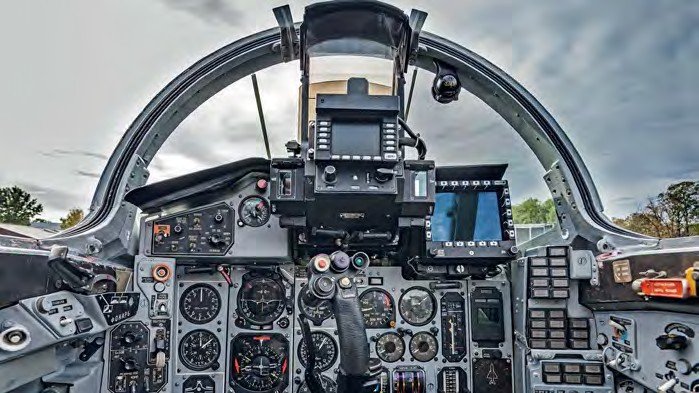 The modernised cockpit of aircraft 18108 viewed from the pilot’s seat. The new PU-29 control panel (with a small colour LCD display) is mounted on the ILS-31 head-up display and the new MFI-54 multifunctional colour LCD display sits where the IPV-2 direct-line-of-sight display used to be. 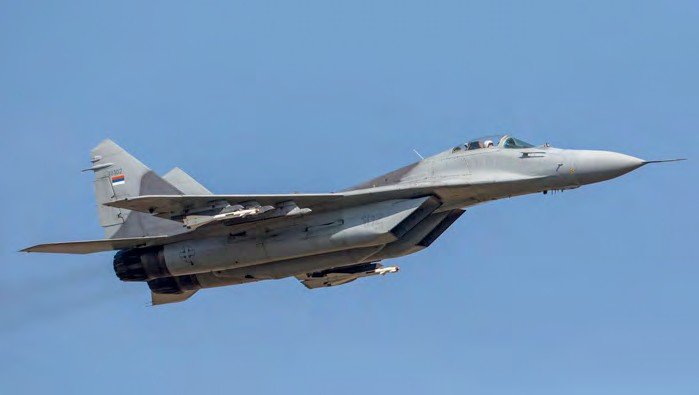 MiG-29 18102, performing during an open day at Batajnica Air Base on October 1, 2016, presents the standard QRA load of a pair of R-60MK air-to-air missiles on the outermost pylons and the PTB-1500 auxiliary fuel tank below the fuselage.

In 2016, the Serbian Government realised this less-than-optimal number of aircraft could not last indefinitely and decided to act immediately to bring the number of fighters with 101. lae to an acceptable level, thus acquiring the first combat aircraft since the breakup of the former Yugoslavia.

Although it had originally opted to buy new MiG-29M2 fighters from Russia, due to their high price (officially quoted by the Serbian Prime Minister Aleksandar Vučić in June 2016 as €45 million per aircraft, but as high as €65 million if the weapons and spare parts are included), the Serbian Government was forced to abandon that plan and start negotiations with Russia and Belarus to acquire additional used former Soviet MiG 29s at the most favourable conditions. 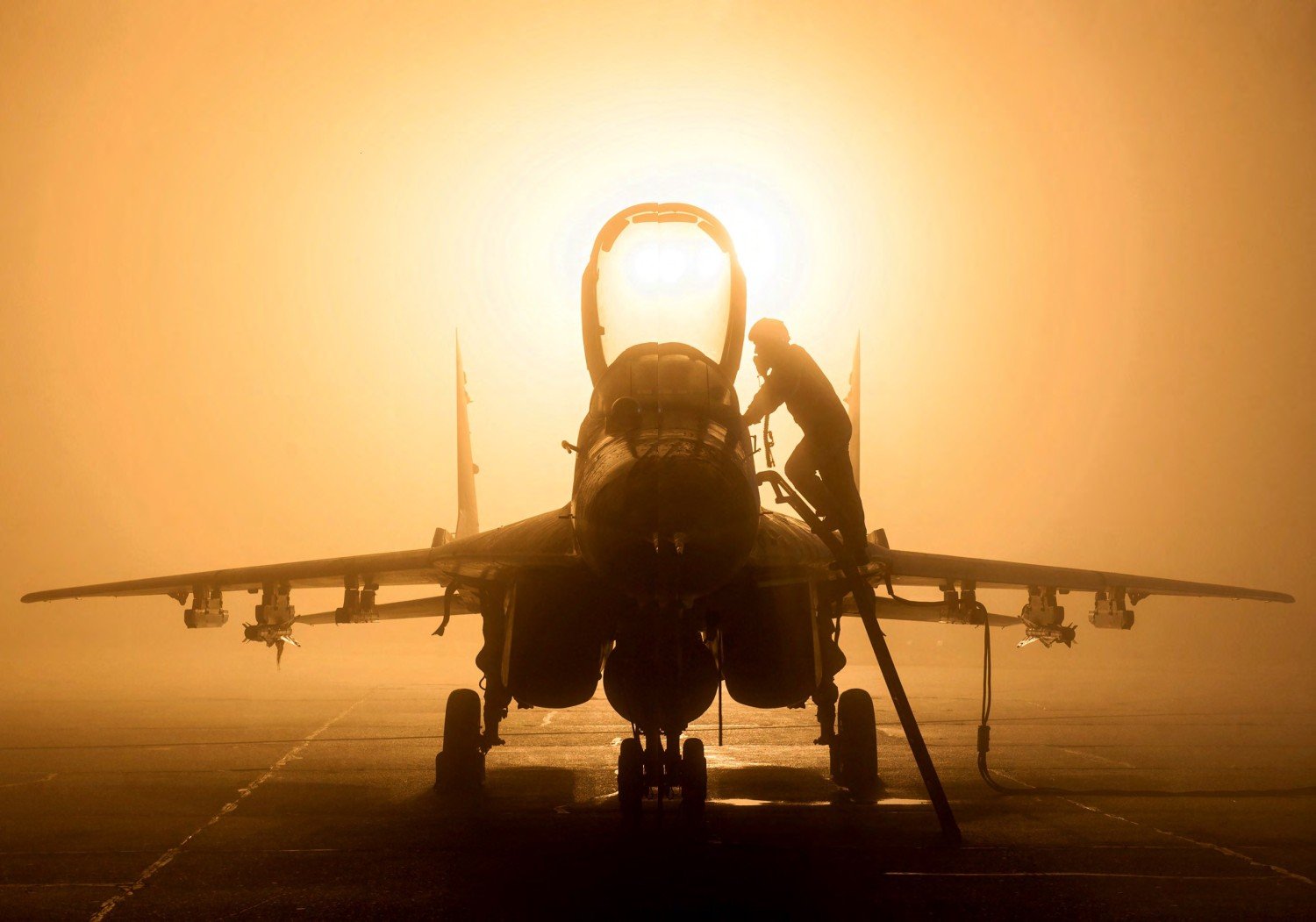 Illuminated by a floodlight, MiG-29 18102 is seen as part of the QRA flight (note a pair of R-60MK missiles) at Batajnica, during a foggy winter night. 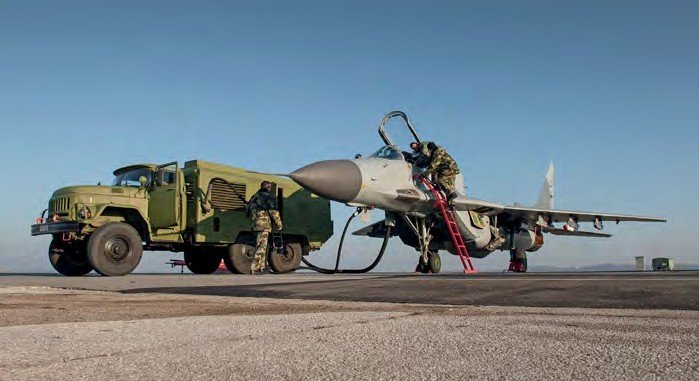 These efforts were successful, and as early as August 2016 unofficial sources revealed Serbia might soon receive a donation of six used Russian MiG-29 aircraft and in return pay for their overhaul and modernisation. The first official confirmation of this agreement came in mid-December 2016 when Vučić stated the aircraft would arrive in Serbia by March 2017.

During his official visit to Russia on December 21, 2016, the six aircraft were presented to Vučić at the 237 Tsentr Pokaza Aviatsionnoy Tekhniki (TsPAT, Aviation Technology Demonstration Centre) at Kubinka Air Base. All six aircraft previously flew with the 31 Istrebitel’nyy Avaitsionnyy Polk (IAP, Fighter Aviation Regiment) from Millerovo Air Base in southwest Russia, just 20km from the border with Ukraine and the troubled Donbas region. As 31 IAP had recently received new Su-30SM Flanker fighters, the MiGs were declared surplus and stored at the base, but in late 2016, after being selected for donation to Serbia, they were restored to active service and transferred to the 116 Tsentr Boyevogo Primeneniya (TsBP, Combat Training Centre) at Privolzhskiy Air Base near Astrakhan, from where they were flown to Kubinka just before the official presentation. 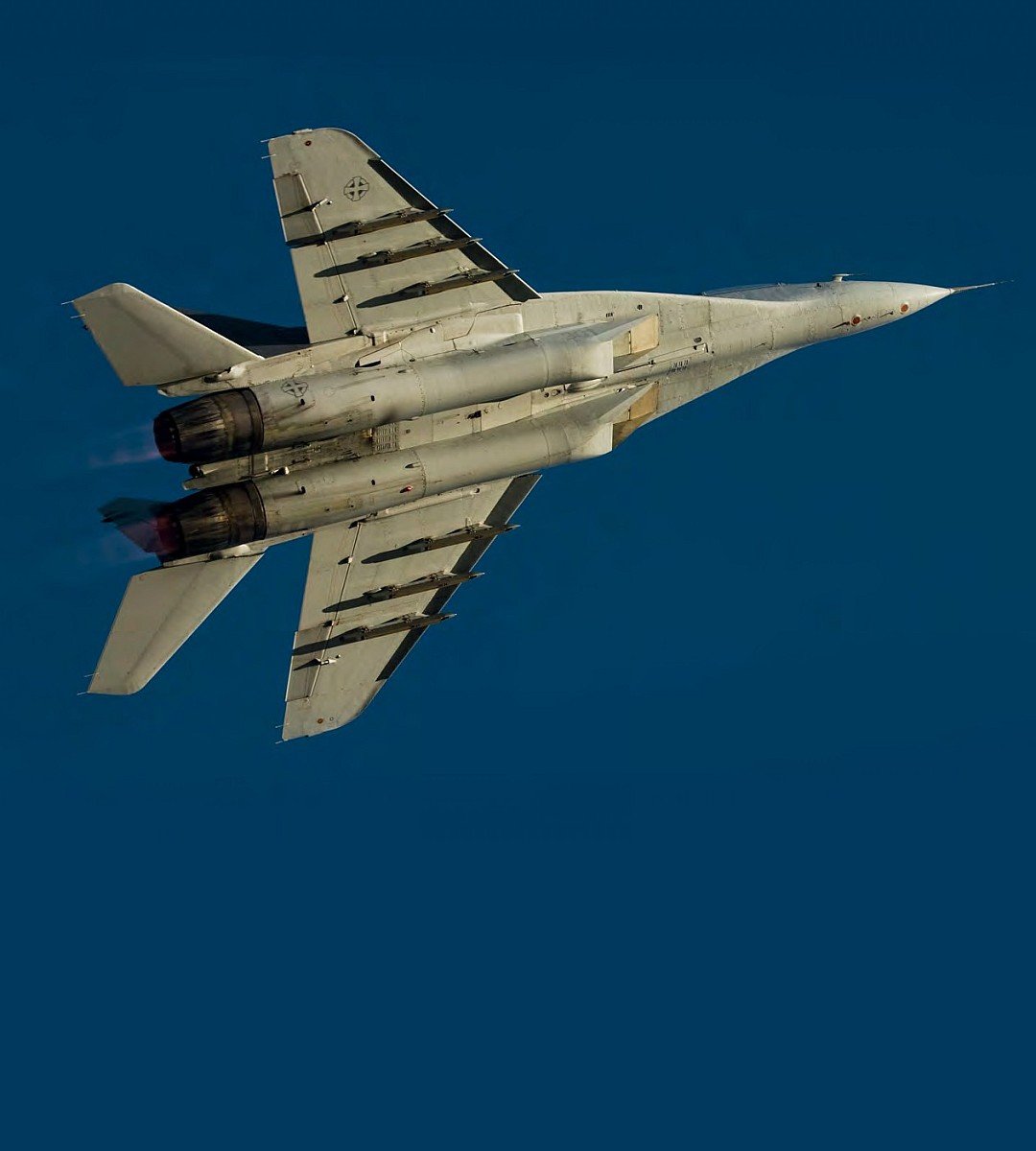 1 The only remaining MiG-29UB two-seat trainer in RV i PVO service is 18301, the first and oldest former Yugoslavian MiG-29 delivered to Batajnica on September 24, 1987.

The aircraft include three MiG-29 type 9-13s (Fulcrum-C), one MiG-29 type 9-12A (the Warsaw Pact export variant) and a pair of MiG-29UB two-seat trainers. The official agreement for the donation was signed on December 23, 2016, and these aircraft arrived in Serbia by April 2017. Their modernisation will be carried out by Russian specialists at the Moma Stanojlović ARP and they are going to receive the exact same modifications as found on the four current Serbian aircraft. This process should be complete by early 2018 in time to enter operational service and the current aircraft to undergo overhaul.

It appears a separate agreement has also been concluded with RSK MiG, bringing changes to the way the MiG-29s are going to be used and maintained in Serbia. RV i PVO is about to implement a new aircraft maintenance system devised by RSK MiG. This system is based on the real technical condition of each aircraft and is much more efficient and cost-effective than the original Soviet-era system that consisted of numerous mandatory/scheduled maintenance procedures or overhauls. During their upcoming overhaul, the four original Serbian aircraft will be subjected to all the necessary modifications required to implement the new system and will finally receive the maximum 4,000 hours or 40 years’ service life (up to 2027).

As all the six aircraft donated by Russia were overhauled in 2010–2014, the new system will be implemented on them at the point when they reach 30 years of service (starting from 2019). Meanwhile, it is expected to implement further modifications to the aircraft’s radars and fire control systems (which would most probably be implemented on the single-seat aircraft only), adding a capability to use the latest R-77 airto- air missiles (AA-12 Adder), as well as TVguided air-to-ground ordnance in the form of Kh-29T missiles (AS-14 Kedge-B) and KAB- 500Kr bombs. This would practically bring these aircraft to MiG-29SM standard.

The whole overhaul and modernisation process for all ten aircraft (the four currently serving with RV i PVO and the six aircraft donated by Russia) is expected to cost a total of €185 million and is scheduled to be completed by 2020. Although no further details are available yet, it appears the deal with RSK MiG also includes direct manufacturer support and spare parts supply/availability for the aircraft in the next ten to 15 years up to the end of their service life. This would ultimately eradicate an old problem in the RV i PVO, when temporary delays in the acquisition of spares and consumables (such as pyro cartridges for ejection seats, batteries and tyres) had kept the entire MiG-29 fleet grounded for months.

More recently, the Serbian Government officially confirmed the rumours that it had simultaneously negotiated a similar deal with Belarus. On January 27, 2017, after an official visit to Belarus by Vučić and Serbia’s Minister of Defence Zoran Đorđević, the Ministry of Defence announced Belarus would donate eight MiG-29 type 9-13 fighters to Serbia. These would be delivered after overhaul and modernisation in Belarus, the latter, of course, paid for in full by Serbia.

Belarus currently operates 34 MiG-29s with the 61 Istrebitel’naya Aviatsionnaya Baza (IAB, Fighter Air Base) at Baranovichi. These are mostly Soviet-era MiG-29 type 9-13 fighters and MiG-29UB trainers, but also include five MiG-29BMs, a local modernisation of the MiG-29 type 9-13 done at the Baranovichi-based 558th ARP. Since the retirement of the Belarussian Su-27 Flanker fleet in December 2012, the MiG-29s are the country’s only operational fighters. With this in mind, it is safe to assume the eight jets to be donated to Serbia are going to be aircraft that are currently stored. 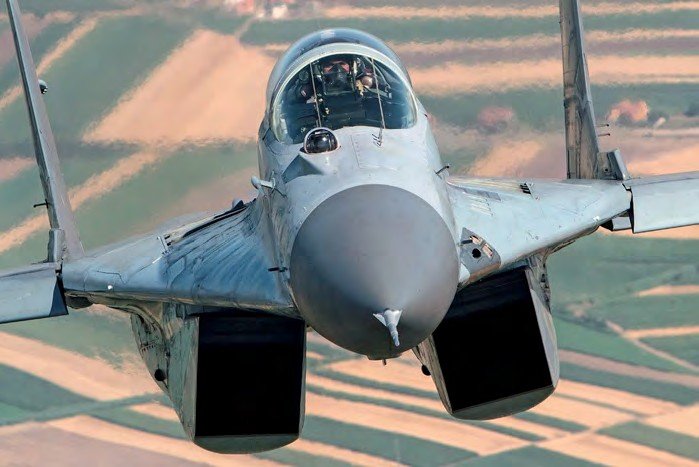 The specific details regarding this donation were scheduled to be defined in May, following which an official agreement would be signed between the two countries. The aircraft are expected to undergo overhaul and modernisation at 558th ARP. Although it remains to be seen what kind of upgrade package would be selected, it is logical to assume that Serbia would be interested in fitting a package identical to that found on the rest of its MiG-29 fleet.

Also, if the implementation of the new maintenance system and securing the uninterrupted supply of the spare parts and consumables required for regular maintenance goes as planned, it would ensure virtually trouble-free service of the MiG-29 with the RV i PVO up to at least 2027 (when the oldest aircraft are supposed to be retired). This would leave more than enough time to select a proper replacement aircraft for the MiG-29 and induct it into operational service by the time the last of its MiG-29 fighters reach their retirement dates in 2029.

With all this sorted, the last remaining MiG-29-related tasks left for RV i PVO would be to build the new aircraft hangars that are planned at Batajnica (to keep aircraft inside at all times and prevent weather conditions affecting serviceability) and start training new MiG-29 pilots, as many of the current ones are nearing their retirement age. Since many MiG-21 pilots are available, it is planned to convert them to the MiG-29, both domestically and in Russia. 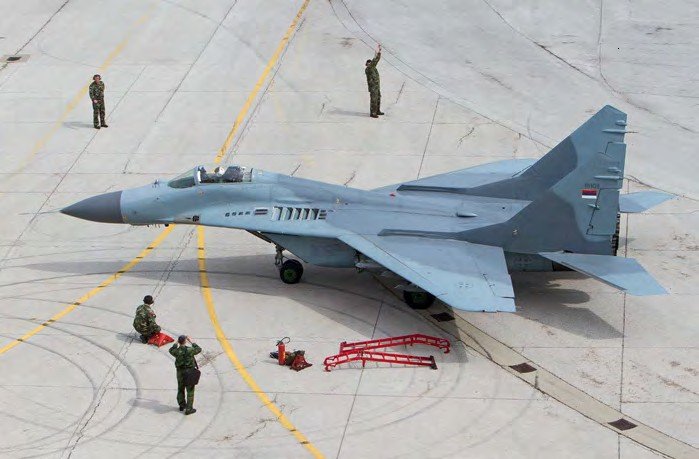 3 All overhauled Serbian MiG-29s received additional modifications including anti-collision lights (one on top of the fuselage spine, the other on the bottom of the port-side engine nacelle) and a reinforcement plate on each wingtip. 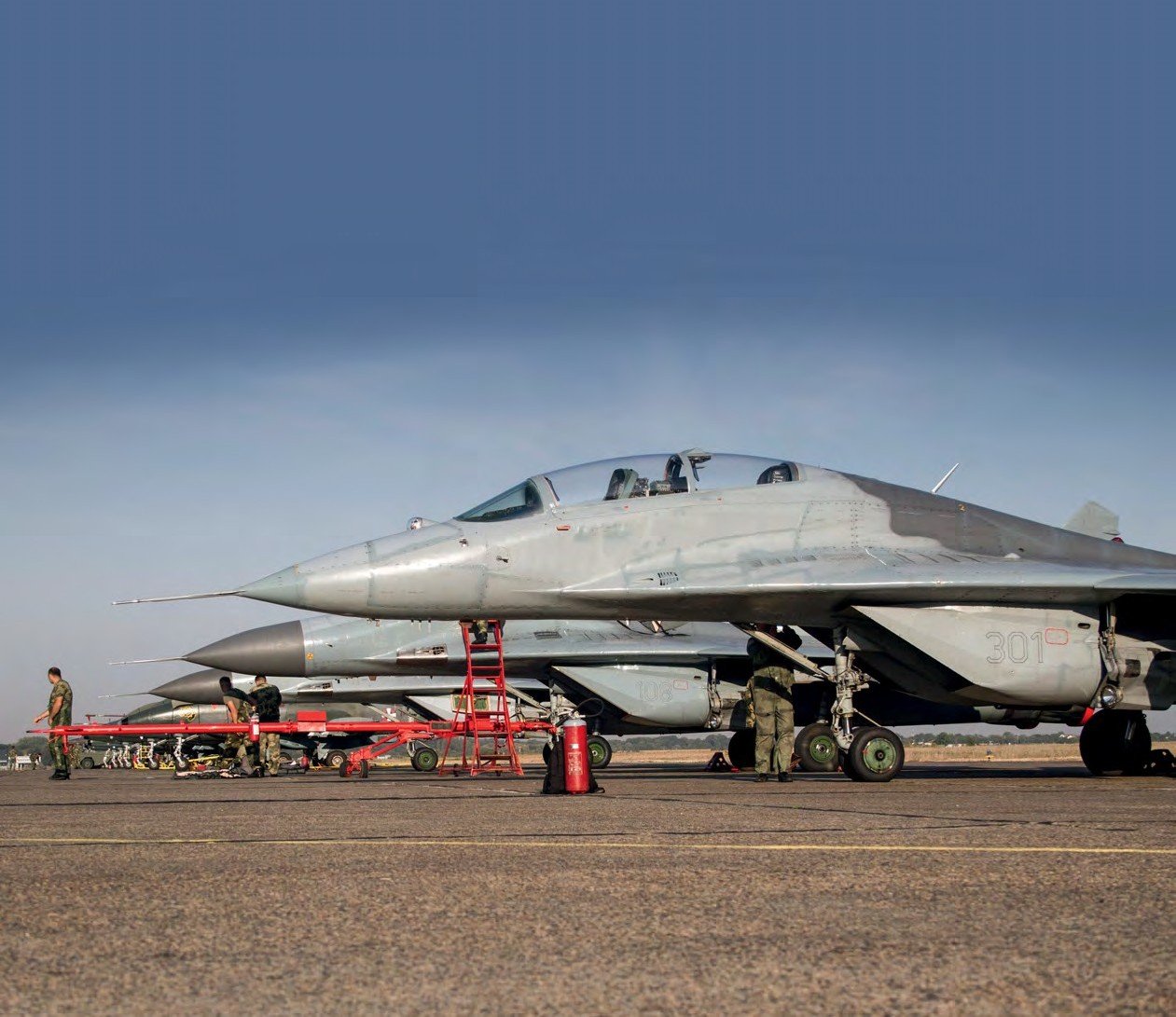