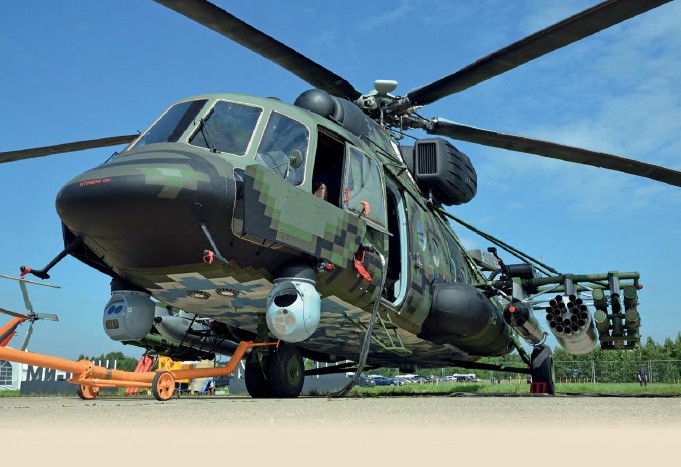 The export version of the Mi-8MN, dubbed the Mi-171Sh-VN in a digital colour scheme configured for special operations.
All photos Piotr Butowski

At MAKS 2017, Russian Helicopters displayed a Mi-171Sh-VN helicopter configured for special forces; a variant of the Mi-8MN but further developed based on Russian combat experience in Syria. The Mi-8MN was developed more than ten years ago as a specially adapted helicopter destined for Russia’s armed and special forces. It was used for ongoing counter insurgency operations in the northern Caucasus and for surveillance and the pursuit of small rebel groups during day and night time operations.

The Mi-8MN is based on the Mi-8AMTSh built by Ulan-Ude and forms part of the Antares airborne reconnaissance-strike system, which also includes the ground-based 926MB datareceiving and indication station.

The Mi-8MN is equipped with the 9K113K-8 Shturm-VK-8 missile system (a derivative of the system used on the Mi- 35M) with 9M114 and 9M120 missiles, the OPS-24N day-night targeting system and a GOES-342 electro-optical sensor turret installed under the starboard front fuselage. A second turret houses the GOES-337 sensor used for surveillance. 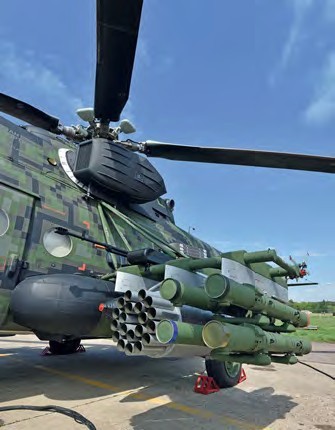 A later model of 2010, dubbed the Mi-8MNP, features an improved Shturm-VK-8M missile system with the OPS-24N-1 day-night targeting system and a GOES-337M3 sensor used for surveillance. Two additional crewmembers seated in the helicopter’s cabin serve as the surveillance and communications operators.

The Mi-171Sh-VN on show at MAKS 2017 was the latest Mi-8AMTSh-V manufactured at Ulan-Ude with the equipment and armament of the Mi-8MNP installed.

The Mi-8AMTSh-V (Vysotnyi means high altitude; the Mi-171Sh-V is an export designation), in production since 2014, is powered by two Klimov VK-2500-03 turboshafts, an engine rated with a two-anda- half minute 2,700shp (2,013kW) power rating, with one engine inoperative, an upgraded main transmission gearbox, a more powerful TA-14-130-08 auxiliary power unit, and updated avionics. 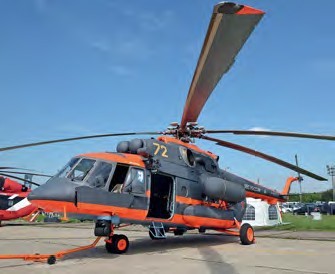 The Mi-8AMTSh-VA configured and painted for arctic operations.

The Mi-171Sh-VN is also equipped with a glass cockpit adapted for night-vision goggles; two electro-optical turrets installed under the forward fuselage, one for targeting and one for surveillance. According to information provided by Russian Helicopters, the Mi-171Sh-VN is fitted with a Prezident-S self-defence system (the export version of the Russian L370 Vitebsk system). The helicopter was painted in pixel camouflage.

Arctic operations are not a role immediately associated with helicopters, but the Mi- 8AMTSh-VA is designed for just that, and two production versions were on display at MAKS 2017. The variant is equipped with additional navigation and communication systems and a powerful heating system to counter the subzero temperatures in the Arctic.

Although this variant of the Mi-8 was previously announced, MAKS 2017 was its public debut. Mi-8AMTSh-VA, side number 72 and 75, were on the Russian Helicopters display and in the Russian Air Force enclosure respectively. The Russian Ministry of Defence received its first three Mi-8AMTSh-VA helicopters last year and two more this July. 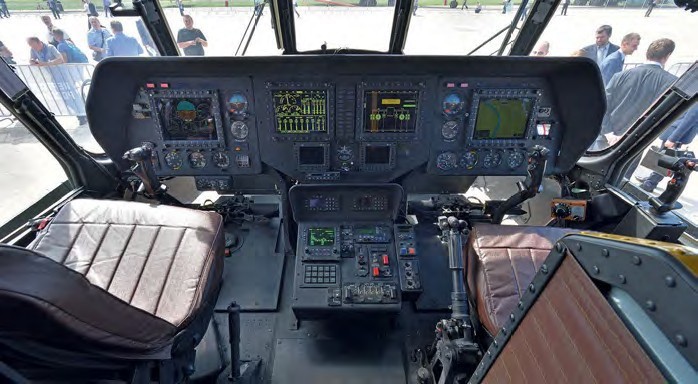 An all-digital cockpit on the Mi-171Sh-VN.

In anticipation of a reduction in orders for military helicopters from the Russian Ministry of Defence, Russian Helicopters is developing a new lightweight helicopter for the civilian market. A model of the type was on show at MAKS 2017 for the first time. Dubbed LMV or Lyogkiy Mnogotselevoy Vertolyot (Lightweight Multirole Helicopter), the helicopter has a coaxial configuration with two three-blade rotors, a short twin tail and landing skids; all designed to generate a low level of noise and vibration. The LMV’s single unspecified engine is likely to be Turbomeca’s Arrius. Designed with a spacious cabin for five people and a luggage compartment, the LMV is currently in its technical design stage. According to Russian Helicopters’ plan, LMV production is expected to begin in the 2020-2021 timeframe at the Ulan-Ude plant. The project, being developed by VR-Technologies, a Russian Helicopters subsidiary, also uses the VRT500 designation.

VR-Technologies also placed a full-scale mock-up of its new unmanned VRT300 helicopter for its public debut. Information available at the show was limited to commercial operations only, including ground surface monitoring, photogrammetry and transport. Typically, this type of unmanned aerial vehicle is equipped with an electrooptical turret installed under the nose; a radar and other payloads can be carried in a container under the fuselage. Flight testing of the VRT300 is scheduled for 2018. 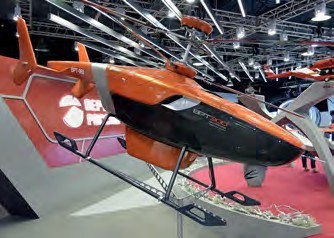 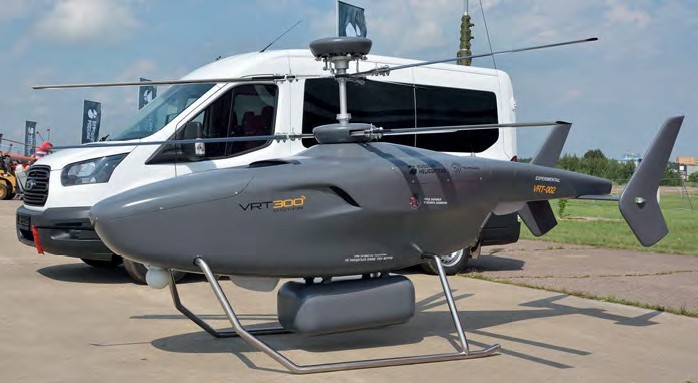 A military version of the VRT300 parked by a commercial van housing its ground control station.