The Berlin Airlift Historical Foundation’s Boeing C-97G 52-2718 Angel of Deliverance was due to have made its maiden post-restoration flight at Floyd Bennett Field, New York by the time this issue appears. More next month.

The latest acquisition for the Western Antique Aeroplane and Automobile Museum at Hood River, Oregon is Boeing 40C N5339, which was restored and operated by Addison Pemberton at Spokane, Washington. 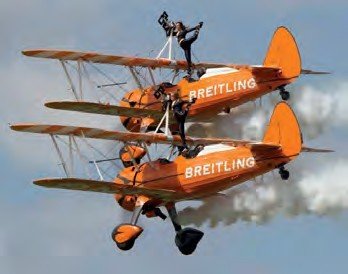 At Balgownie, New South Wales, a full-size replica PZL P11 fighter is being constructed by members of the local Polish Association. Once complete it will be displayed at the Illawarra Polish Museum, where it is hoped money can be raised to construct a hangar.

Following the news that Swiss chronograph company Breitling was ending its support for the Super Constellation Flyers Association’s Lockheed L-1049G (see last month), it was confirmed in October that the firm’s sponsorship of the Breitling Wingwalkers team of Boeing Stearman Kaydet biplanes is also being concluded. The pioneering wingwalking outfit, operated by Vic Norman’s AeroSuperBatics company from the former Royal Flying Corps aerodrome at Rendcomb in Gloucestershire, will henceforth be known as the AeroSuperBatics Wingwalkers. New sponsorship is being sought.