At RAF Scampton on 16 February, Hawk T1A XX227, the last example from the original fleet of Hawk T1s first delivered to the Red Arrows when they converted from the Gnat, made its last formation flight with the team. Originally delivered to the RAF on 14 July 1978, it joined the Reds on 6 February 1980, and has flown 8,077 hours and made 13,855 landings.

1953-built DHC-2 Beaver G-EVMK flew following a two-year restoration with the Aircraft Restoration Company at Duxford on 15 February, with owner Thomas Harris in the right-hand seat and John Romain at the helm.

North American F-6D Mustang 44-84786/N51BS Lil’ Margaret may be heading to a new owner in Europe. This photo-reconnaissance version of the P-51D was previously owned by Henry ‘Butch’ Schroeder/ Midwest Aviation Museum at Danville, Illinois, and was the WW2 Grand Champion at Oshkosh in 1993.

Percival Vega Gull G-AEZJ has been sold by Biggin Hill-based David Hulme to Comanche Warbirds, and is set to be used in a new feature film about 1930s record-breaking pilot Beryl Markham. She used a Vega Gull to fly from RAF Abingdon, Oxfordshire across the Atlantic to Cape Breton Island, Nova Scotia, in September 1936. 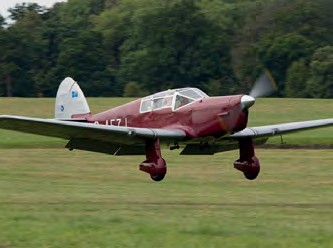