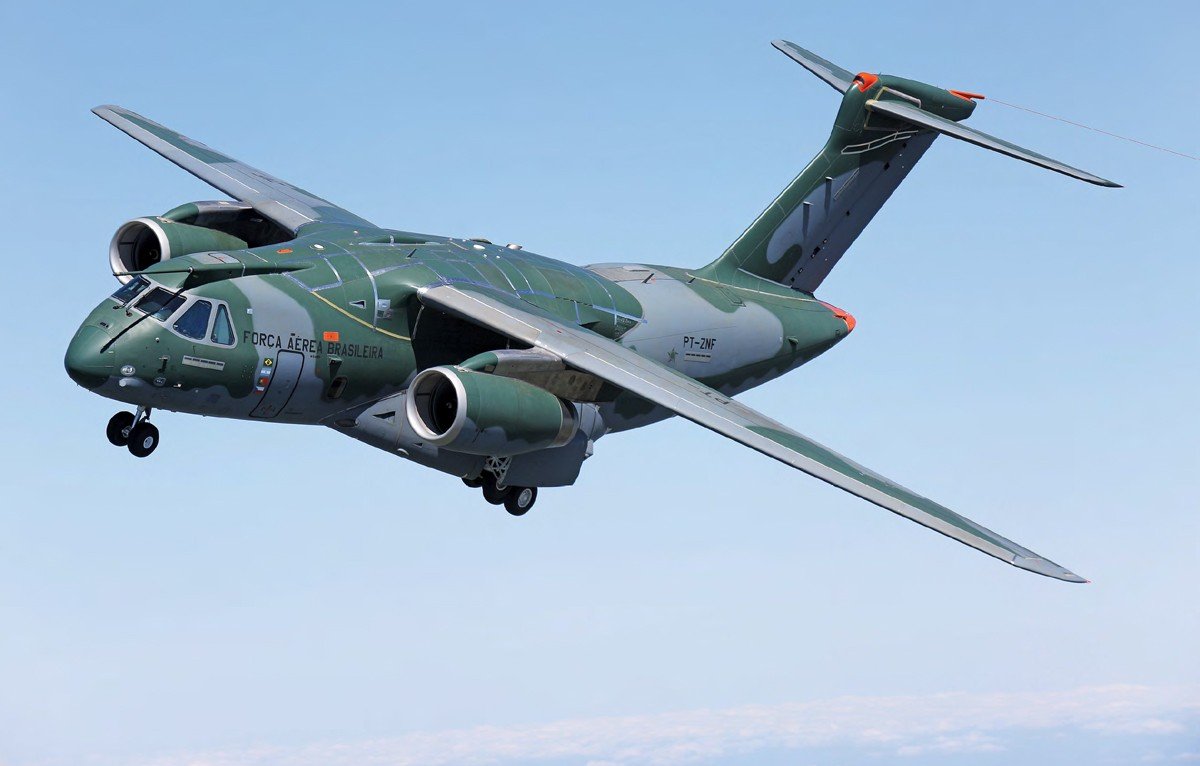 The development of Embraer’s KC-390 medium airlifter is progressing well, according to the manufacturer, with the two flying prototypes having completed in excess of 650 flight hours by early November and testing of the static test airframe about to begin.

The KC-390 has been designed in response to a Força Aerea Brasilera (Brazilian Air Force) requirement for a medium, multi-role airlifter to replace its ageing fleet of Lockheed C-130H Hercules, which first entered service in 1965.

On November 18, the programme achieved a significant milestone with the receipt of Provisional Type Certification from the Força Aerea Brasilera’s Instituto de Fomento e Coordenação Industrial (Industrial Fostering and Co-ordination Institute – IFI), responsible for military certification. The achievement of provisional certification means the KC-390 in its basic configuration complies with requirements and is an important stepping stone to full type certification.

A total of 28 new production KC-390s are on order for Brazil, together with the two prototypes, which will be refurbished at the conclusion of the flight test campaign. The company says it also holds letters of intent for a further 32 aircraft from six countries, but to date no contracts have been signed.

Embraer had been studying a military airlifter in the C-130 Hercules-class since 2006 and a development contract for the KC-390 was signed with the Força Aerea Brasilera in 2009. Shortly afterwards, strategic industrial partnerships were signed with Argentina, the Czech Republic and Portugal for the manufacture of subassemblies and components.

The development contract included the construction of two flying prototypes and single examples of static and fatigue test airframes. As part of this contract, the two prototypes are to be handed over to the Força Aerea Brasilera when development is complete.

From the outset, Embraer designed the aircraft as a multimission platform, including air-to-air refuelling (AAR), aerial fire-fighting, search and rescue (SAR) and medevac, using equipment kits that it says can be installed in under three hours.

Following the CDR milestone, Embraer launched its marketing campaign at the LAAD Defence and Security Trade Fair in Rio de Janeiro in April 2014.

President and CEO of Embraer Defense and Security at the time, Luiz Carlos Aguiar told reporters: “The project has firmly and consistently moved forward, and now we have concluded the CDR we are ready to begin discussions with potential customers of the aircraft. There is a heavy demand for replacing older aircraft in this segment of the international market.”

At the Paris Airshow at Le Bourget in June 2013, Embraer announced it was partnering with Boeing for sales and marketing of the KC-390, whereby the US giant would be responsible for sales, sustainment and training opportunities in the United States, the UK and select Middle East markets.

Embraer and the Força Aerea Brasilera subsequently signed the first acquisition contract valued at BRL 7.2 billion at the manufacturer’s Gavião Peixoto production facility and test airfield in São Paulo State in May 2014, coinciding with the opening ceremony of a new final assembly hangar.

The first prototype, PT-ZNF (msn 390001), was rolled out at Gavião Peixoto on October 21, 2014, attended by the new President and CEO of Embraer Defense & Security, Jackson Schneider, the Brazilian Minister of Defence, Celso Amorim and the Commander of the Força Aerea Brasilera, Lieutenant Brigadier General Juniti Saito. 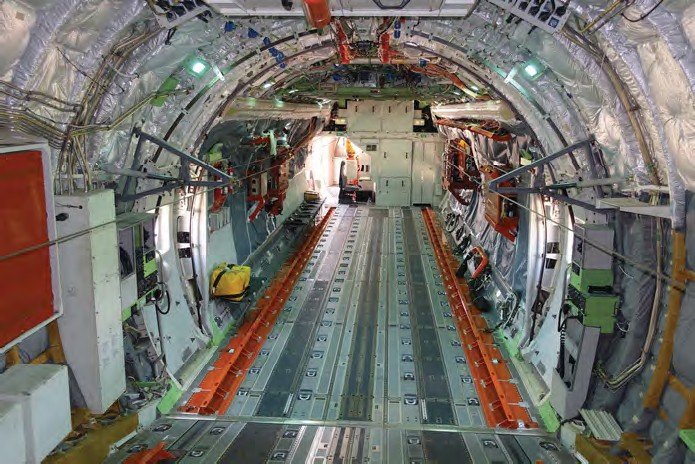 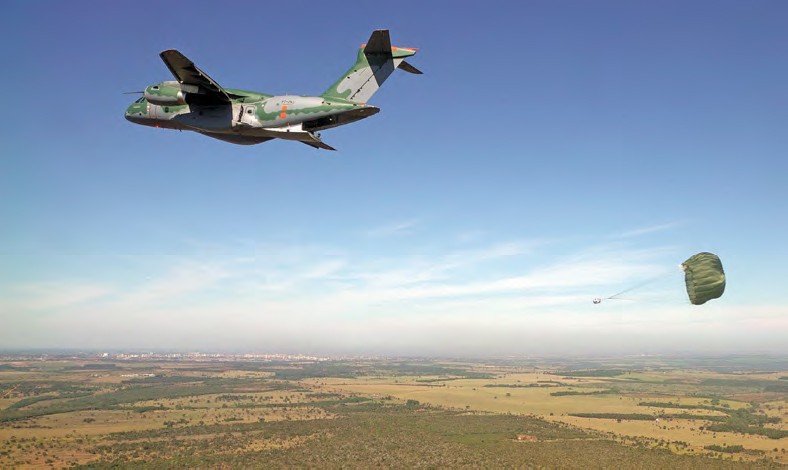 More than a month was spent at the Força Aerea Brasilera base at Campo Grande in 2016 undertaking the first air drop assessments, which included container delivery system drops.

Jackson Schneider said: “This significant milestone of the KC-390 programme demonstrates Embraer’s ability to manage such a complex and high-technology project and to perform it on track. It paves the way for the beginning of the ground tests to prepare for the first flight.”

Designed around the core military airlift requirement, the KC-390 is a high-wing, T-tailed aircraft with a rear cargo ramp and an uncluttered internal cargo bay. Constructed largely of traditional materials, it is in the same class of transport aircraft as the Lockheed Martin C-130J Super Hercules currently in production in the United States.

It is powered by two IAE V2500-E5 turbofan engines, similar to those installed on some A320 airliners, each rated at 31,330lb (139.4kN) thrust. By using turbofan engines instead of the turboprops, Embraer claims increased efficiencies due to higher cruise speed and altitude.

The KC-390 has a maximum cruise speed of 470kts or Mach 0.80 and a service ceiling of 36,000ft (10,972m). The flight control system is fully fly-by-wire (FBW) with active sidestick controllers. Avionics systems include the Rockwell Collins Pro Line Fusion system, similar to that on Boeing’s 787 airliner, and a Selex Gabbiano T-20 tactical radar. The flight deck is fully night vision goggle compatible and the standard crew includes two pilots and a loadmaster.

An optional self-protection suite is available, including an Elbit radar warning receiver, laser warning receiver, missile approach warning system and a directional infrared countermeasures in the tail cone, together with 14 chaff and flare dispensers and additional ballistic protection.

According to Embraer, loads include a Rheinmetall Boxer 8 x 8, GDLS Stryker (with armour), LAV (with turret) or one BMP-3 infantry combat vehicle. Alternatively, two 20ft ISO containers or one Sikorsky S-70 Black Hawk helicopter (disassembled for transportation) can be carried. In the medevac role, the Força Aerea Brasilera requires 74 stretchers and eight attendants to be accommodated and there are electrical power and oxygen provisions to support this requirement.

To meet Força Aerea Brasilera requirements for a C-130 replacement, the KC-390 has to operate from a variety of locations from unpaved austere airfields in the Amazon region to the ice runways of Antarctica, and be capable of carrying 12,000kg of cargo over 500 nautical miles (925km) from a 4,000ft (1,220m) long semiprepared runway.

Optional roles include probe and drogue air refuelling of both fixed and rotary-wing aircraft, using removable Cobham 912E wing-mounted aerial refuelling pods. Up to three auxiliary fuel tanks can be installed in the cargo bay for the AAR role, controlled by an auxiliary crew station on the flight deck, which is not part of the basic aircraft specification, but can be installed on the production line if requested by a customer.

The two prototype KC390s are fully equipped with test instrumentation and each aircraft can perform any flight test role. 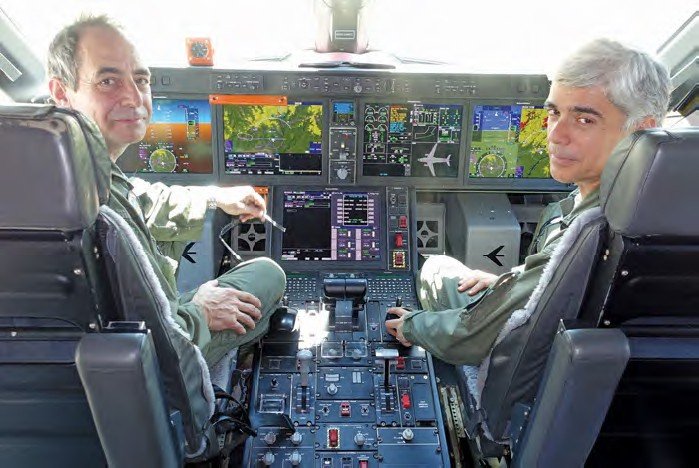 The auxiliary crew station can also be used to display information from a Rafael Litening II electro-optical/infrared (EO/IR) pod mounted under the forward fuselage in an SAR configuration.

Final assembly of the KC-390 is undertaken at Gavião Peixoto and Embraer is also the design authority for development and certification, management, integration, structural and final assemblies, as well as the production in Brazil of the forward fuselage, rear fuselage (one structure), engine pylons, AAR pods, vertical stabiliser leading edge, tail boom, wing tips, landing gear, and tubing and wiring.

In addition, the strategic agreements signed with Argentina, the Czech Republic and Portugal mean a significant number of each KC-390 is manufactured outside Brazil.

Following the maiden flight of the first prototype KC-390 in February 2015, pilot Mozart Louzada said the aircraft performed in accordance with Embraer’s computer modelling and testing – which includes a (non-motion) cockpit engineering simulator and iron bird test rig – validating the maturity of the ground test process.

He said: “The aircraft behaved in a docile and predictable manner. The advanced FBW flight control system and avionics make flying easy and render a smooth and precise flight.”

The second aircraft (PT-ZNJ, msn 390002) made its maiden flight at Gavião Peixoto on April 28, 2016. Embraer says the flight test campaign is proceeding well, with no major issues. Confidence in the maturity of the aircraft is such that Embraer flew the aircraft to the UK in July of last year to attend the Farnborough International Air Show.

The first prototype, 390001, departed Embraer’s headquarters in São José dos Campos and routed via Recife, Sal (Cape Verde Islands) and Alverca before arriving at Farnborough. After the show it conducted a limited demonstration tour that took it to Odolena Voda, Czech Republic, Cairo (for a technical stop) and Abu Dhabi. During the trip, Embraer reported that the KC-390 displayed 100% availability over the 16 planned flights, in surface temperatures up to 45°C (113°F). The return trip to Brazil included a technical stop at Malta. By the time it arrived home on July 28 the aircraft had flown more than 16,300 nautical miles (30,200km) in 23 days and accumulated over 48 flight hours.

The initial phase of the flight test campaign was to expand the KC-390’s flight envelope to maximum speed and altitude using the initial prototype. KC-390 msn 390002, the second prototype, was initially used for performance evaluation of the V2500-E5 engines before moving on to role-specific testing. Both aircraft are fully equipped with test instrumentation: each aircraft can perform any flight test role. 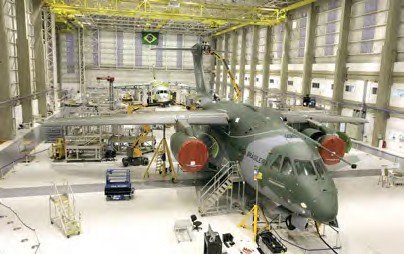 Final assembly of the KC-390 is undertaken at Gavião Peixoto in a new facility opened in 2014, which coincided with Embraer and the Força Aerea Brasilera signing the first acquisition contract. 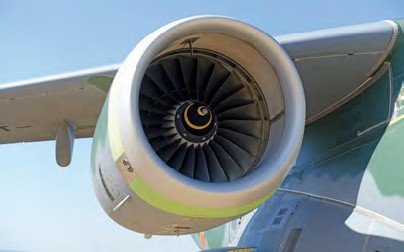 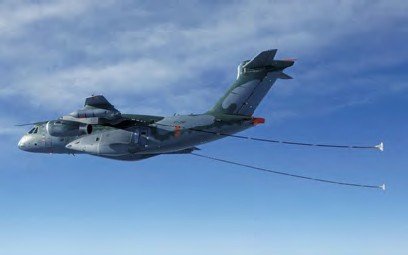 Tests using both the high-speed and low-speed air-to-air refuelling drogues have been conducted to assess basket stability. Up to three auxiliary fuel tanks can be installed in the cargo bay for this role.

All operational modes of the FBW flight control system have been tested and completed. Such was the confidence in the system that the second prototype flew for the first time in the normal mode, rather than the direct mode used by the first aircraft.

AAR stability tests, using both the highspeed and low-speed drogues, have been conducted and the results show basket stability is better than Embraer’s modelling predictions.

KC-390 Programme Engineer Vanderson Moreira said: “In May, we performed the first air drop assessments and we spent more than a month at the Brazilian Air Force’s base at Campo Grande. We performed static line and free fall drops with paratroopers and container delivery system dropping, both through the side doors and cargo ramp, and the results were very good.”

The next series of testing will include icing trials over two separate campaigns. Use of shapes added to the airframe to simulate ice accumulation will be performed first at Gavião Peixoto, followed by flying in real icing conditions elsewhere. Crosswind testing will be conducted at Punta Arenas in Chile in early 2017 and cold-soak trials using the McKinley Climatic Laboratory at Eglin Air Force Base, Florida will follow in the first half of the year.

With testing progressing well, Embraer is marketing the aircraft around the world. The manufacturer holds letters of intent for 32 aircraft, from Argentina (6), Chile (6), Colombia (12), the Czech Republic (2) and Portugal (6).

The company had proposed a version of the KC-390 to fulfil Canada’s Fixed Wing Search and Rescue (FWSAR) requirement, which includes the EO/IR pod and a search radar which, although mounted in the nose, is claimed to provide 360o coverage. In December however it was announced that the KC-390 had lost out to the Airbus Defence and Space C295 in the Canadian competition.

New Zealand recently released a request for information for a strategic and tactical airlift capability to replace its elderly C-130H and Boeing 757 transports. Embraer has responded with an offer of five KC-390s. The Royal New Zealand Air Force Future Air Mobility Capability requirement is seeking delivery of the first aircraft by February 2020 and for IOC a year later.

The Royal New Zealand Air Force also has another requirement for a Future Air Surveillance Capability (FASC) platform to replace its Lockheed P-3K2 Orions. In December the New Zealand Government announced it is looking to give early consideration to the project, following the receipt of proposals from industry. Fernando Ribeiro de Queiroz says Embraer is proposing a maritime patrol version of its E190-E2 airliner for the FASC competition, but if the technical requirements are relaxed slightly, it can offer a KC-390 with the nose-mounted search radar and EO/ IR pod proposed for Canada’s FWSAR competition, together with a palletised mission system.

“You could also remove the mission system and fly the normal airlift, medevac or air-to-air refuelling missions,” he explained. 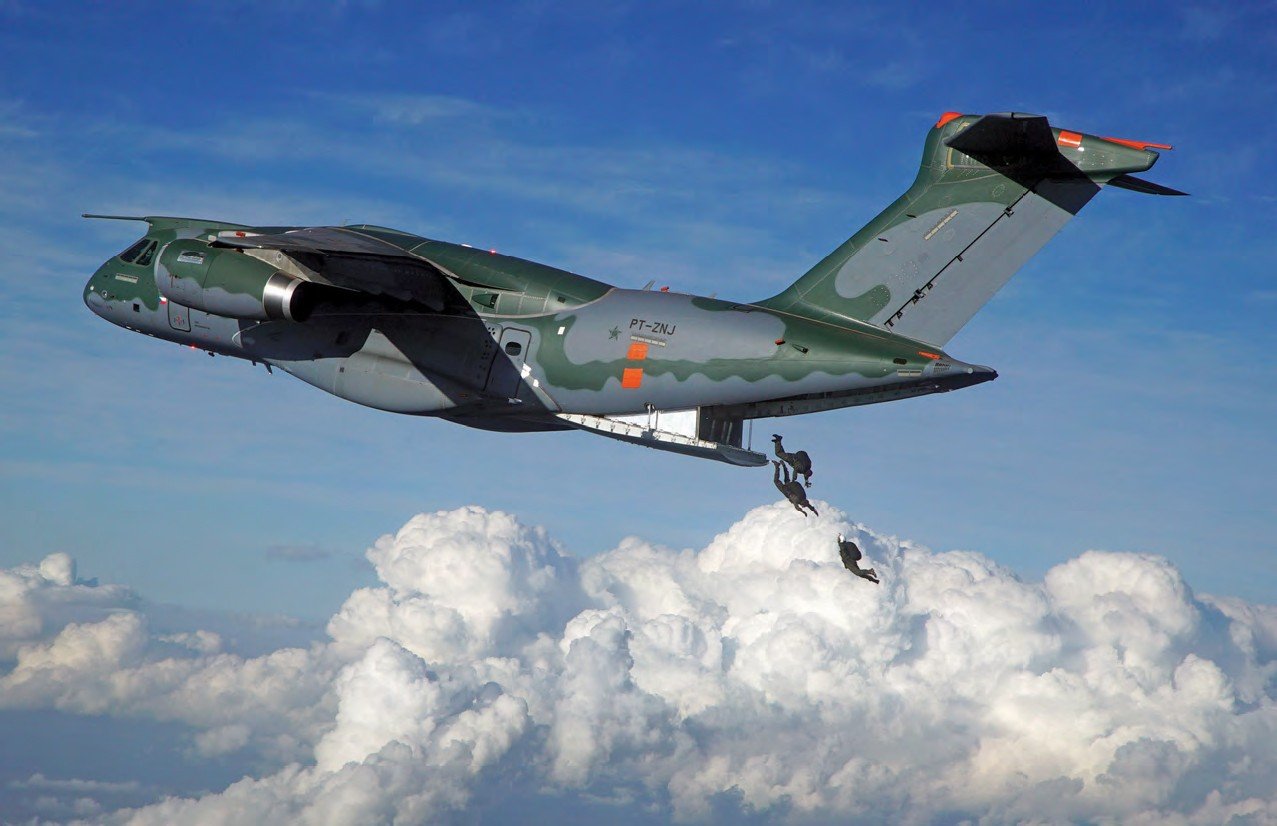 Initial static line and free fall drops with paratroopers were made in 2016. The KC-390 is designed to carry up to 66 paratroopers.