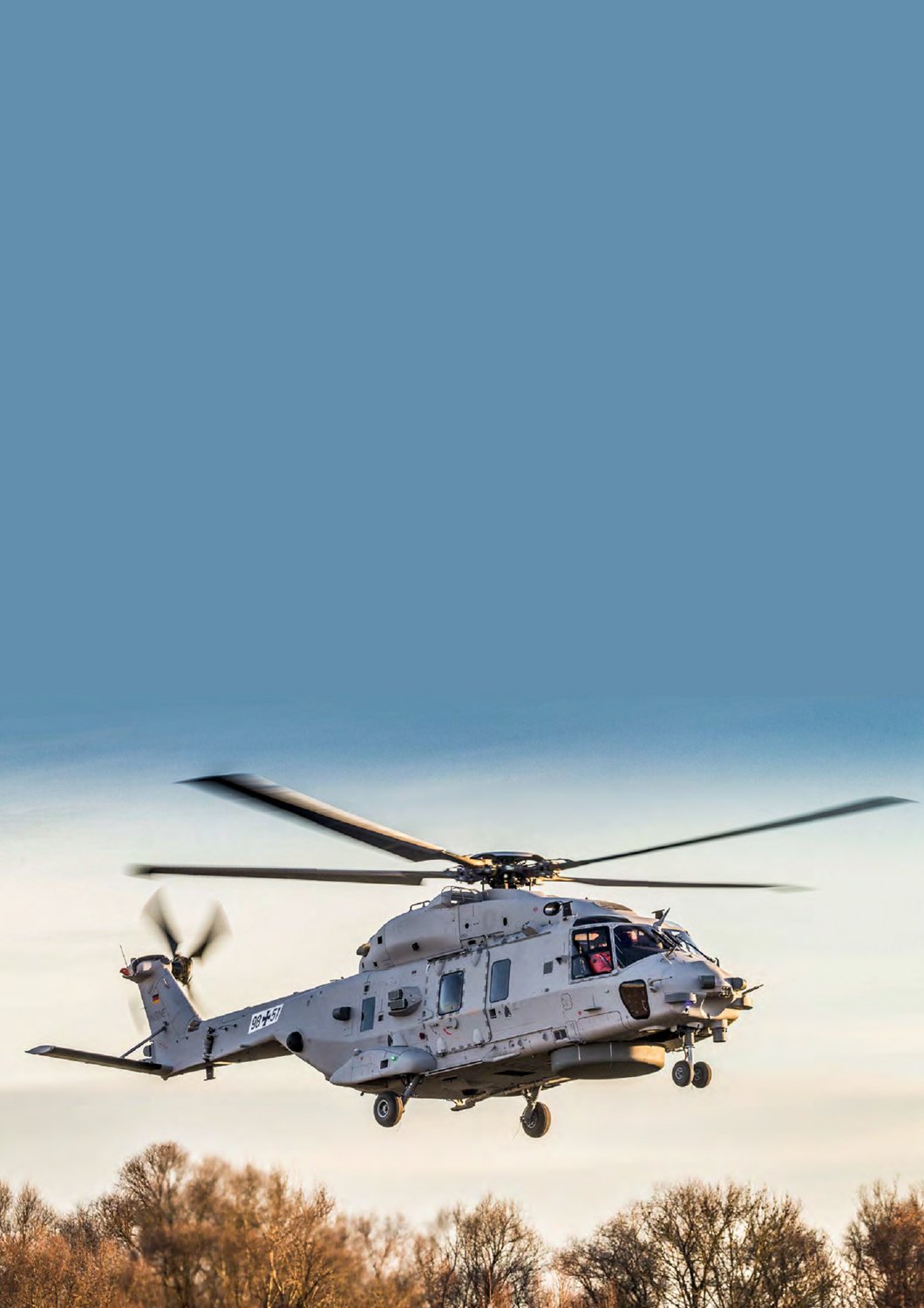 Developed and produced by the NHIndustries (NHI) consortium, the NH90 was the first production helicopter to feature an entirely fly-by-wire flight control system and incorporates a largely composite airframe with some lowobservable characteristics, low-noise advanced main rotor blades. In addition, its design directs hot exhaust gases into the rotor disc, thus reducing the aircraft’s heat signature.

There are two basic NH90 variants: the Tactical Transport Helicopter (TTH) for land and expeditionary operations and the NATO Frigate Helicopter (NFH) for maritime missions.

Both basic variants share up to 80% commonality of structure, engines, transmission and most core systems, including the human-machine interface, fly-by-wire, automatic flight control, communications, navigation, and electrical and hydraulic systems.

NH90 NFH can undertake a variety of maritime roles, including search and rescue (SAR), anti-surface vessel (ASV); anti-surface warfare (ASuW); antisubmarine warfare (ASW) and transport. The helicopter is well suited to maritime roles, thanks to the use of modern, highstrength carbon fibre composite materials that are not susceptible to corrosion in the saline maritime environment, and features marine-specific adaptations to allow operation from small flight decks. The airframe offers high crashworthiness and all of its sensors and weapons are optimised for maritime use.

The electronic fly-by-wire flight control system confers excellent handling qualities, especially when hovering above water, even under adverse weather conditions. This is a big advantage in SAR operations and its cargo carrying capability makes it well-suited to vertical replenishment, carrying cargo either in the cabin or on a load hook. Equipment for fast roping can also be installed.

An NH90 NFH can carry 14 troops or nine stretchers (on three triple racks) or seat seven survivors in SAR configuration, or four passengers when configured for ASW. The first NH90 NFH was handed over to the Netherlands Defence Helicopter Command in April 2010: the first of five air arms (France, Italy, the Netherlands, Norway and Sweden) to receive the NH90 NFH. As of January 2017, 70 had been delivered from a requirement of 129. 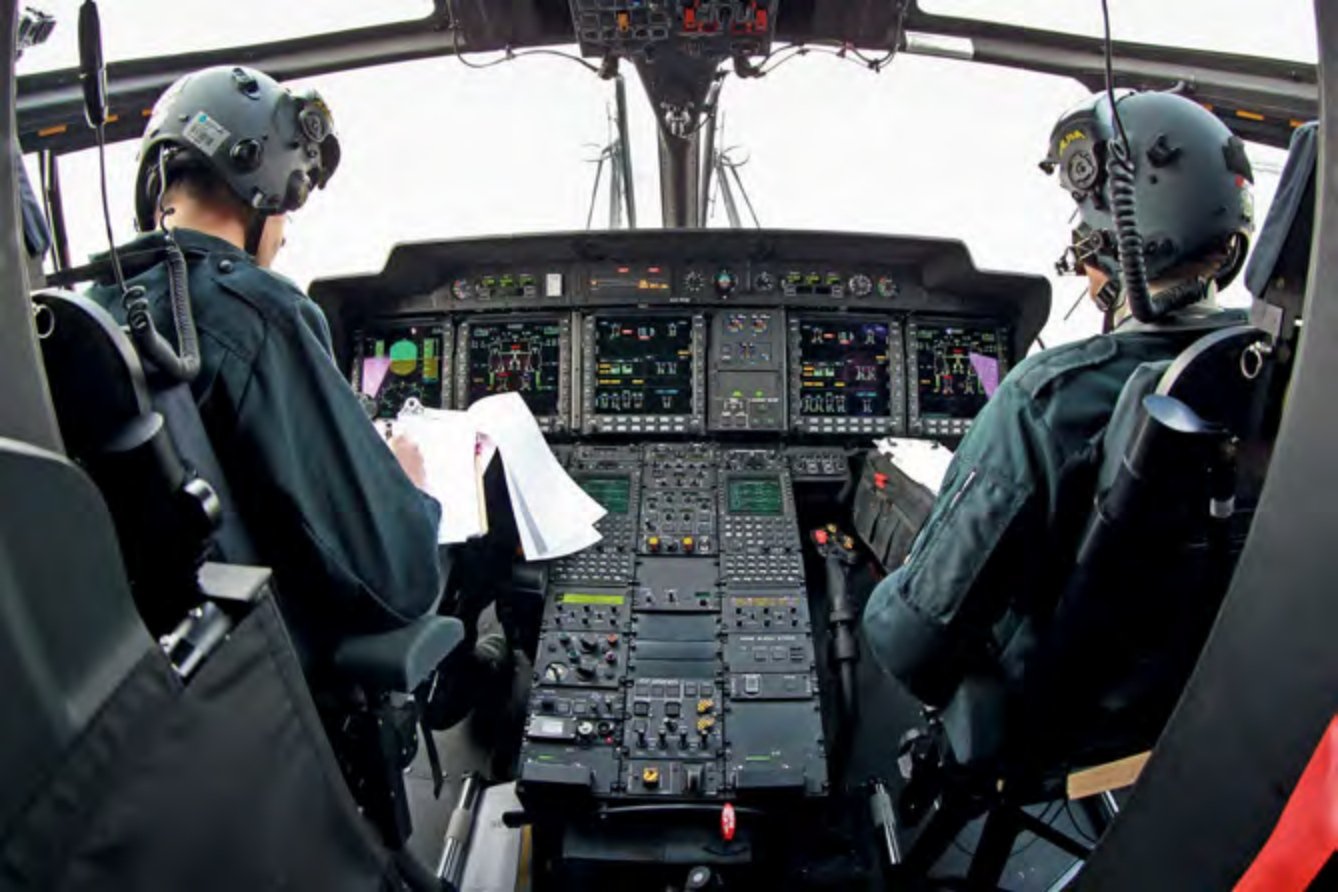 Germany’s Marineflieger is acquiring a derivative of the NFH – designated NTH and known as the Sea Lion – to replace its fleet of Westland Sea King Mk41s, which have served for over 40 years.

Originally, the Bundeswehr planned to replace two Marineflieger helicopters (Sea Kings and Lynx Mk88s) with one multi-role type with an ambitious plan that failed because the 30-aircraft requirement was deemed unaffordable at the time.

Instead, the Bundeswehr opted to replace the Sea Kings, retaining and upgrading its Lynx helicopters to Super Lynx standard followed by a 2013 decision to order 18 NH90 NTH variants at a reported cost of €1.4 billion, while the number of NH90 TTH versions for the Heersflieger (army aviation) and Luftwaffe (air force) was cut from 122 to 82.

Germany’s NH90 NTH is based on the NH90 NFRS (Naval French Support), a customised variant built for the French Aeronavale (naval air arm).

The standard NH90 NFH is equipped with: an under-fuselage 360° tactical radar, automatic powered folding main rotor and tail rotors to save space on board ship; the harpoon deck securing system; and telebrief and a data umbilical cable. All maintenance work can be carried out when folded, including replacement of major components, engines or main rotor blades.

An NH90 NFH can be refuelled in the hover, a mode known as helicopter inflight refuelling, for uploading fuel from ships without a flight deck. Different NFH sub-variants may have ASW, ASuW, transport and SAR equipment fitted. 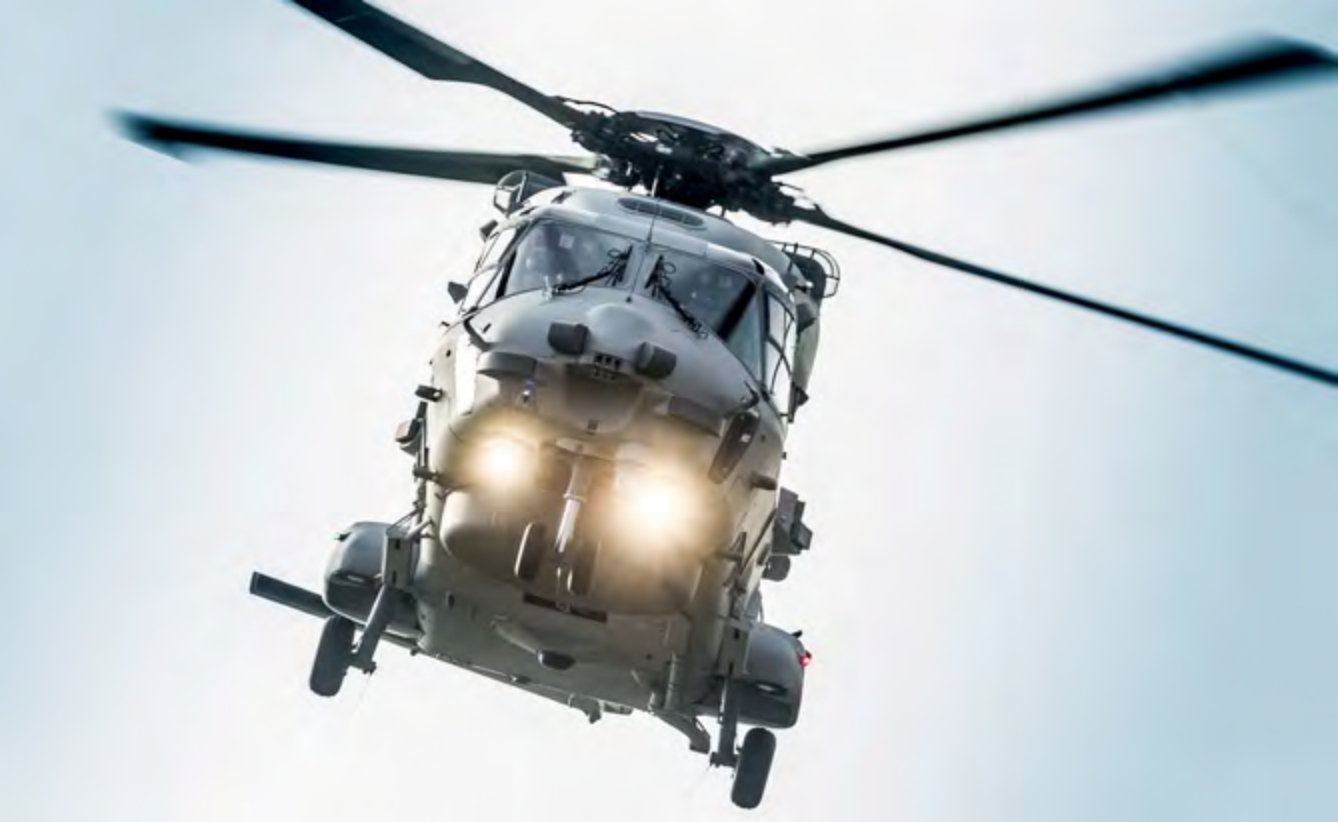 The Aeronavale operates two NH90 NFH sub-variants: 13 configured primarily for land-based transport and SAR duties, a basic NFH designated NFRS, which replaced the SA321 Super Frelon; and 14 dedicated sub-hunters that lack the rear access ramp of the SAR-transport version. All 14 are designated NH90 NFRN and embark on Horizon, FREMM and Lafayette-class frigates.

NH90 NFRS is capable of undertaking operational missions and configured for ASV, ASW and ASuW role-specific equipment and armament. In effect it is a modular system, designed for a broad spectrum of missions, depending on the equipment actually fitted.

NH90 NTH Sea Lion is fitted with an automatic identification system, and a sensor operator (SENSO) console in the cabin for operation with a threeperson crew, comprising a pilot, tactical coordinator and SENSO.

The aircraft is equipped for navigation in civil airspace under instrument flight rules with a new IFF, Satcom and digital radio equipment.

M3M 12.7mm machine guns can be mounted in the doors on both sides for self-protection, and a modular ballistic protection system can be installed.

Primary missions for the NH90 NTH are SAR, maritime surveillance and reconnaissance, and transportation of special forces, boarding teams, troops and material.

Marine sources have said the Sea Lion will not be used for the employment of missiles or torpedoes, but can be fitted with a second mission console, dipping sonar, a sonobuoy system, external and internal fuel tanks and a stores management system, with heavy stores pylons for the Marte Mk2 anti-surface missile or the MU90 torpedo.

Marineflieger’s second NH90 (c/n NGEN02) was expected to enter final assembly line ground testing in February and make its first flight in the second quarter of 2017. Delivery of the first Sea Lion to Marinefliegergeschwader 5 at Nordholz Air Base is scheduled for October 2019; the first crews are already in training. 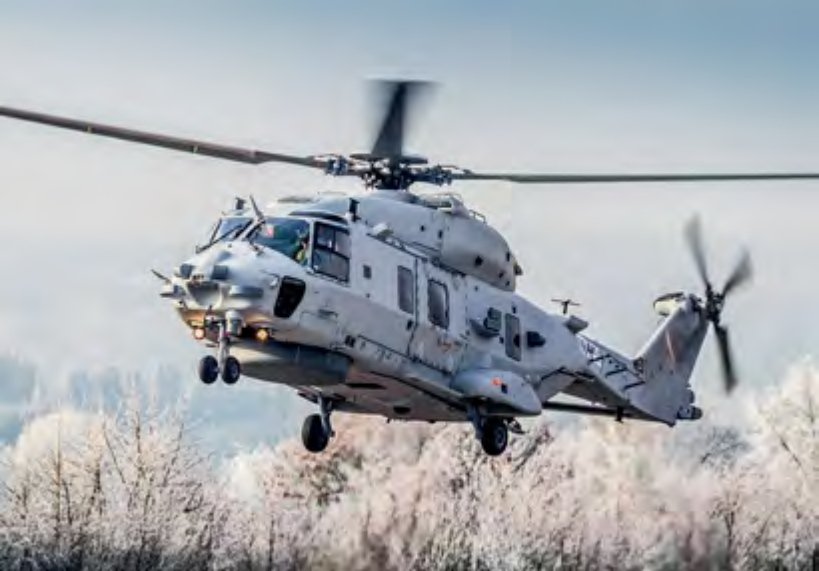