The project to get D-Day veteran Douglas C-47A 42-100521 Night Fright airworthy continues apace at Coventry Airport, despite the disappointment of not being ready in time for the 75th anniversary of D-Day commemorations in Normandy during early June.

The restoration team of 10 men at Heritage Air Services is led by Ben Cox. The aircraft is owned by commercial pilot Charlie Walker and his father Philip whose family firm, Walker Logistics, owns Membury Airfield near Hungerford, Berkshire, from where Night Fright took off at 23.00hrs on 5 June 1944 and headed for Normandy. The machine is destined to be based at Membury, where a Troop Carrier Command museum will be established in the future.

Since Aeroplane last spoke to the team, work has continued on almost every area. The two Pratt & Whitney R-1830 engines are now fully installed and ready to go bar a few last connections, and a third engine has arrived after overhaul from Anderson Aeromotive of Grangeville, Idaho.

The hydraulic system is virtually complete, the oil and fuel tanks having had all necessary repairs completed. Work is under way on the electrics and avionics, with some of the radio racks and wiring looms installed. Once the electrical system work is done, it is hoped that the engines can be run in early September. The cockpit has been completely stripped with a few repairs made and is well on the way to being completely rebuilt. Engineer Tom Woodhouse has been responsible for researching the original instruments and equipment. The Skytrain will have a totally authentic cockpit and instrument panel, with attention being paid to every last detail. While all this has been taking place, work continues on another very significant part of the project, the interior detail. Serving RAF sergeant Neil Jones has worked tirelessly to source every single object that would have been installed inside Night Fright in June 1944, and is 99 per cent there in his search for all the items to complete the cockpit, radio operator and navigator’s stations and the rear of the aircraft. 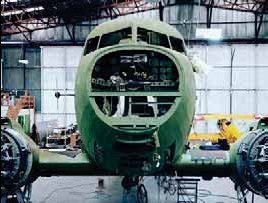 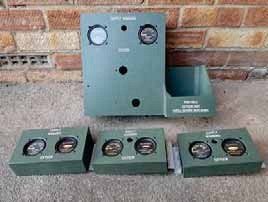 Part of an original wartime oxygen system that has been sourced by Sgt Neil Jones.
CHARLIE WALKER

Although it missed the events in Normandy, on 2 June Night Fright achieved national fame as the subject of Guy Martin’s D-Day Landing on Channel 4. Charlie Walker says, “It was a real privilege working with Guy. To be able to create something that remembers the sacrifices men and women made for our freedom 75 years ago was a huge honour. Guy Martin was the perfect man for the job — he’s an engineer, he gets stuck in and he’s passionate about history.

“The restoration has reached an exciting stage where lots of parts of the project are coming together and will soon be installed in Night Fright as this very significant project moves towards its final phase.”