By the late 1950s, even the RAF’s ultimate Meteor night fighter mark, the NF14, was showing its age — the idea of going up against high-flying Soviet bombers ‘in anger’ seemed a decidedly concerning prospect. One pilot recalls his year on this nocturnal force 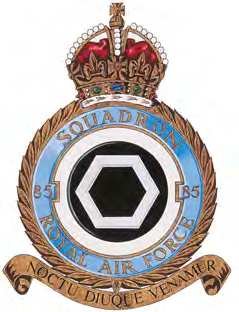 A neat echelon of 85’s NF14s over the south coast. The mark’s AI Mk21 airborne intercept radar was not especially longranged, only being able to pick up targets in certain conditions as little as 12 miles away.
KEY COLLECTION

Chopped from the Chivenor course as being likely to kill myself on the Hunter, the RAF, in its infinite wisdom, suggested I should undergo twin-jet conversion at Worksop and from there proceed to North Luffenham on a night fighter operational conversion unit, where I would be able to kill a navigator as well. Arriving at that delightful Rutland airfield with my new bride of one month, I was teamed up with my unsuspecting nav, Eric Stafford. We survived, in spite of being accused of trying to fix the target height during a ‘trailed’ check flight, and were posted in August 1957 to No 85 Squadron at West Malling.