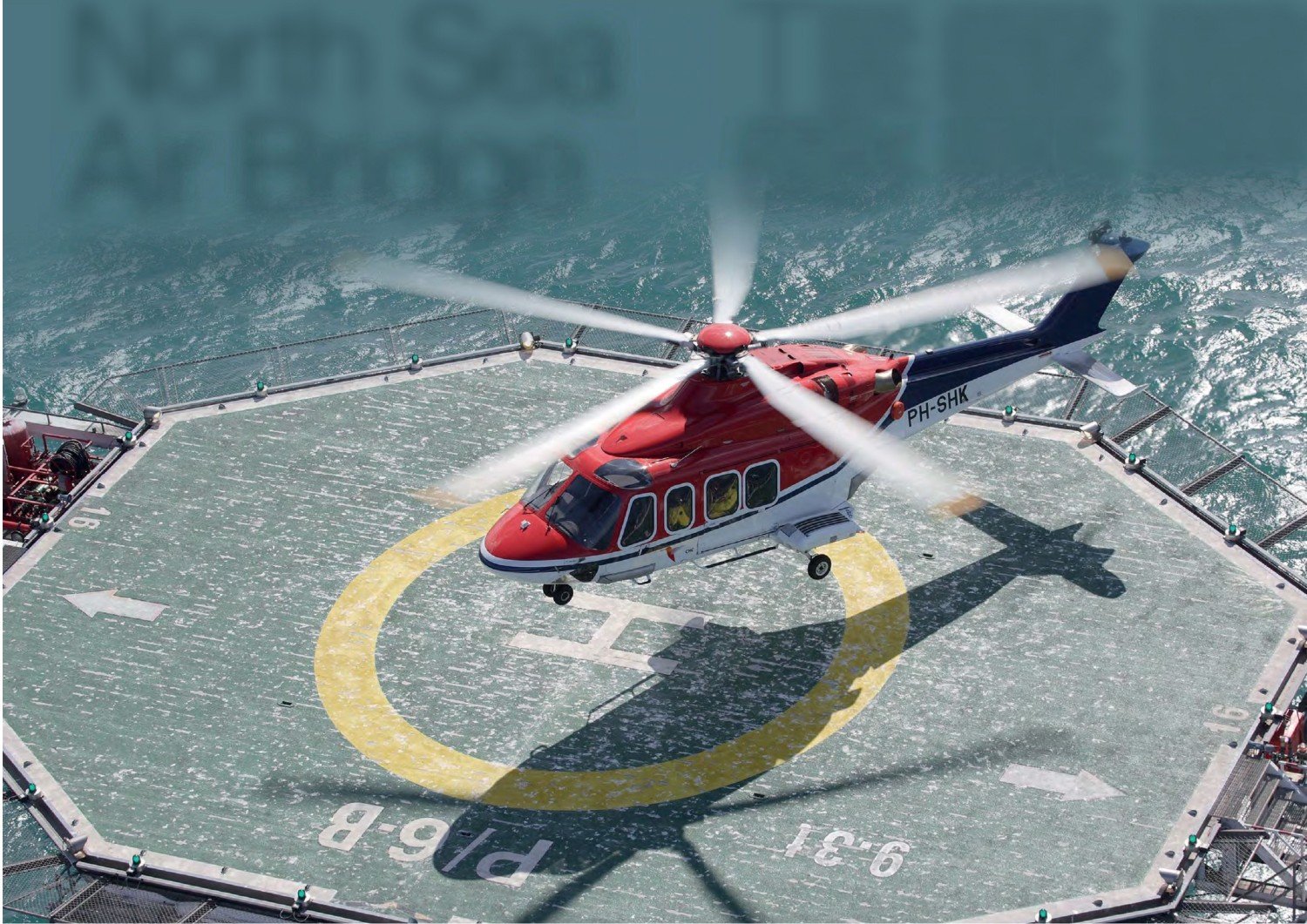 Development of the six-tonne AW139 started in the late 1990s as a Bell-Agusta joint venture.
Leonardo Helicopters

The waters off the coast of the UK and Ireland, the North and Irish Seas and the English Channel provide some of the most changeable and challenging environments to work in, not least for offshore helicopter operators in the North Sea.

The development of the two-crew concept and the emphasis on instrument flight rules, amongst other developments, have been vital to ensuring the safe continuation of operations; likewise, the development in the 1990s of the Health and Usage Monitoring System (HUMS). HUMS records the critical status of components in a helicopter, detecting any early defects that need to be rectified before there is a critical effect on operational safety.

Several bases are used for transport to oil and gas platforms in the waters around the UK. Covering the southern sector of the North Sea there is Norwich International Airport. Other bases are North Denes Heliport located on the outskirts of the seaside resort of Great Yarmouth, also in Norfolk, and Den Helder International Airport in the Netherlands. Support for offshore activity in the Irish Sea is carried out with helicopter operations from Liverpool John Lennon Airport and Blackpool Airport. 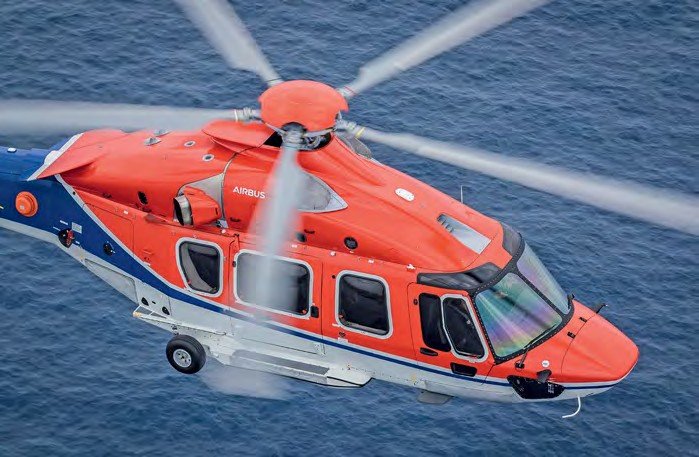 The 6,000kg (13,227lb) AW139 was started in the late 1990s as a development by a joint venture between Bell and AgustaWestland. It is powered by a pair of Pratt & Whitney Canada PT6C-67C engines equipped with full authority digital engine control (FADEC).

The first prototype flew in 2002 and over the following couple of years the aircraft was certified, first in Europe with the European Aviation Safety Agency (EASA) and then by the Federal Aviation Administration (FAA). In 2005, AgustaWestland bought out Bell Helicopter’s share of the programme. Fast-forward a decade and AgustaWestland unveiled its newest AW139 variant, with a 7,000kg (15,432lb) maximum gross weight, at the Helicopter Association International (HAI) Heli-Expo 2015 in Orlando, in the colours of the launch customer, the French offshore operator Heli-Union.

The Sikorsky S-92 first flew in 1998 and is produced not only in the United States, but also with partners such as AIDC in Taiwan, Gamesa in Spain, Mitsubishi in Japan, Gungzhou Aircraft in China and Embraer in Brazil.

This was the first time a commercial helicopter had been designed and produced in a virtual environment. It was achieved using the internet and the latest computeraided engineering and manufacturing techniques, enabling parts and components to be cut and manufactured to specification first time.

The S-92 is powered by General Electric CT7-8A engines with a Honeywell auxiliary power unit. The S-92 is currently in service over the North Sea with CHC (flying from Aberdeen in support of the offshore oil and gas industry) and Bristow (flying for the UK search and rescue contract). 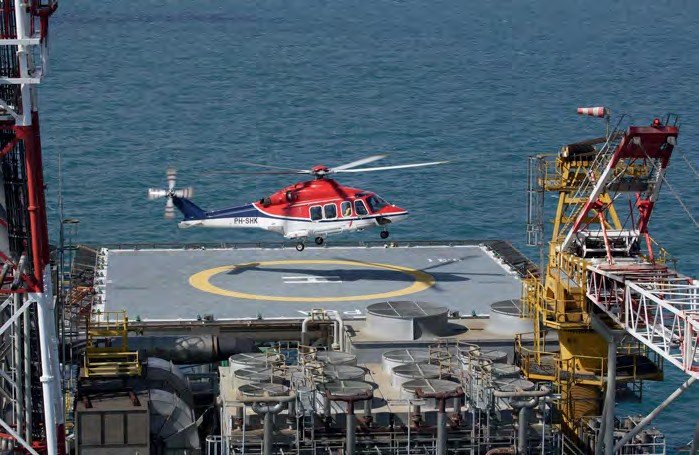 CHC flies its AW139s to North Sea oil and gas rigs from Den Helder in the Netherlands.
Leonardo Helicopters

In May 2016, the global fleet of S-92s achieved one million flying hours. In August 2017, EASA certified the HUMS-based Outerlink IRIS In-Flight Data Monitoring System for installation on the S-92.

The IRIS is a first for the rotary-wing industry as it provides satellite-transmitted, real-time flight data, as well as monitoring cockpit activities and communicating with the pilots. Another safety function is that the IRIS can receive immediate alerts and warnings from the cockpit. The GPS tracking reports are provided through L-Band satellite or Iridium.

Derived from the successful AS365 Dauphin series, the Airbus Helicopters H155 is powered by twin Turbomeca Arriel 2C2 engines with FADEC providing safety with regards to one engine inoperative (OEI) performance. It carries 12 passengers and operates with Bristow and NHV out of Norwich. CHC also operates the H155 out of Den Helder.

In February 2008, at that year’s HAI Heli- Expo, the then-named Eurocopter unveiled its new EC175 (now known as the H175) in mock-up form. This helicopter, designed and developed in conjunction with AVIC of China, is a medium 7,000kg (15,432lb) class helicopter powered by twin Pratt & Whitney PT6C-7E engines.

In OEI conditions, it has a high-power margin, which means it can perform class one take-offs and landings in International Standard Atmosphere (ISA) + 20o with a maximum take-off weight from a helideck at 70ft (21m). The brain of the H175 is the innovative Helionix avionics system, a fully modular integrated system that operates between one or more screens and is designed to reduce pilot workload and contribute to safer flying. Its features include a situational awareness display in the middle of the instrument panel showing the terrain ahead and warning of any obstacles. The display also shows the aerial environment and any aircraft in the vicinity.

NHV was the launch customer for the H175 in 2014 and subsequently celebrated 10,000 flight hours with its H175 fleet in March 2017. On August 2, 2017, CHC took delivery of its first H175 in Aberdeen to commence flying in support of the offshore oil and gas industry.

At the Paris Air Show 2011, the then AgustaWestland unveiled the new AW189 and subsequently the first flight test example flew for the first time in December that year. The AW189 is in the 8,000kg (17,636lb) class and is powered by a pair of General Electric GE CT7-2E1s with FADEC.

The AW189 has an open architecture avionics suite with a fully digital glass cockpit, including the latest situational awareness technology to enhance safety and reduce pilot workload. Production started in the summer of 2013 and the fifth prototype was sent to the AgustaWestland Yeovil plant for work to be started on certifying the aircraft for the SAR role. Subsequently, in February 2014, the AW189 received EASA certification and 13 months later the FAA certified the airframe.

Guardian on the high seas

The North Sea is a challenging and at times dangerous environment, so over the decades Bristow and Babcock have provided some form of SAR cover in support of offshore oil operations and the public.

The Maritime and Coastguard Agency started its helicopter operations in the early 1970s courtesy of Bristow Helicopters with a dedicated Westland Whirlwind, then progressed to the Sikorsky S-61N until 2005, when the contract was awarded to CHC Scotia. The CHC contract operated four newer S-92s from Aberdeen and Sumburgh and three AW139s from Lee-on-Solent and Portland.

From the early 2000s there was the JIGSAW SAR programme in the North Sea operating a pair of AS332L2 in high-visibility yellow and black colours. One aircraft was based at Den Helder while the other one was in Aberdeen, though both were operated by Bristow. Unfortunately, in November 2006 one of these helicopters, G-JSAR, made an emergency ditching into the sea, 10 nautical miles (18km) northwest of Den Helder.

Not long after that, Bond Helicopters took over the contract and provided two AS332L2 for JIGSAW with the same colour scheme; today, NHV utilises the AS365N3 Dauphin for SAR purposes from both Den Helder and Pistoolhaven in the Netherlands. In effect, these took over the support for the Dutch Coast Guard after the Koninklijke Luchtmacht (Royal Netherlands Air Force) retired its dedicated Bell 412 SAR helicopters in January 2015.

Come the announcement of UK SAR taking over from the traditional military SAR in the UK, which involved retiring the legacy Sea King helicopters of the Royal Air Force and Royal Navy and contracting out SAR, it is back to the future, with Bristow providing SAR with the S-92 and AW189 at ten locations around the UK. 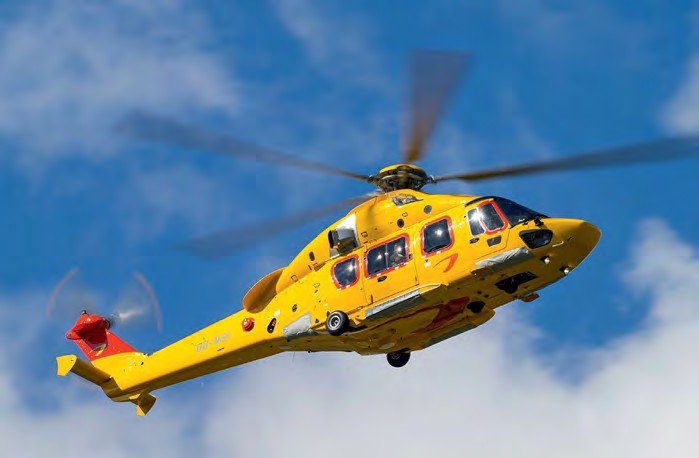 In summary, the only types currently operational in the North Sea are the AW139 and AW189, S-76C, S-92, AS365N3 Dauphin and the H175. Airbus Helicopters H225s did operate there, but after a fatal accident in Norway in April 2016 EASA and both the Norwegian Luftfartstilsynet (Civil Aviation Authority) and the UK Civil Aviation Authority grounded the H225 and AS332L2.

In October 2016, EASA lifted its grounding. The regulatory authorities in the UK and Norway have not yet followed suit, but that might change.

A substantial number of airframes in operation are leased from companies such as the Irish-based Waypoint Leasing, Milestone Aviation Ltd and LCI Aviation, which have increased their business due to the world economic crisis and the fall in oil prices, making it more cost-effective for oil and gas companies to lease aircraft.

What developments are likely in this market in the future? Airbus Helicopters unveiled its X6 concept during the Paris Air Show 2015, which is intended to replace the H225 and AS332L2. Leonardo’s AW609 (formerly the Bell-Agusta BA609) commercial tiltrotor was aimed and marketed towards the offshore helicopter industry from its first conception in the late 1990s. There are currently three prototypes flying in the United States out of Leonardo’s Philadelphia facility. (One of the new airframes was brought in to replace the fatal loss in Italy of an AW609 in October 2015.)

This signifies an intent to replace the different fixed and rotary wing assets that support offshore oil exploration. An example of that is Eastern Airways using a BAE Jetstream 31 to fly oil rig crews from Aberdeen Dyce to Scatsta Airport in the Shetland Islands, with the crews then transferring to helicopter to go to the rig.

At Heli-Expo 2012, Bell Helicopter unveiled its Bell 525 Relentless, which will be the first commercial fly-by-wire helicopter. The mock-up was unveiled in the yellow colours of Louisiana-based Petroleum Helicopters Incorporated. The leasing companies such as Milestone Aviation and Waypoint have ordered substantial numbers of this type, so in time Bell 525s could conceivably end up flying over the North Sea some day in the future. 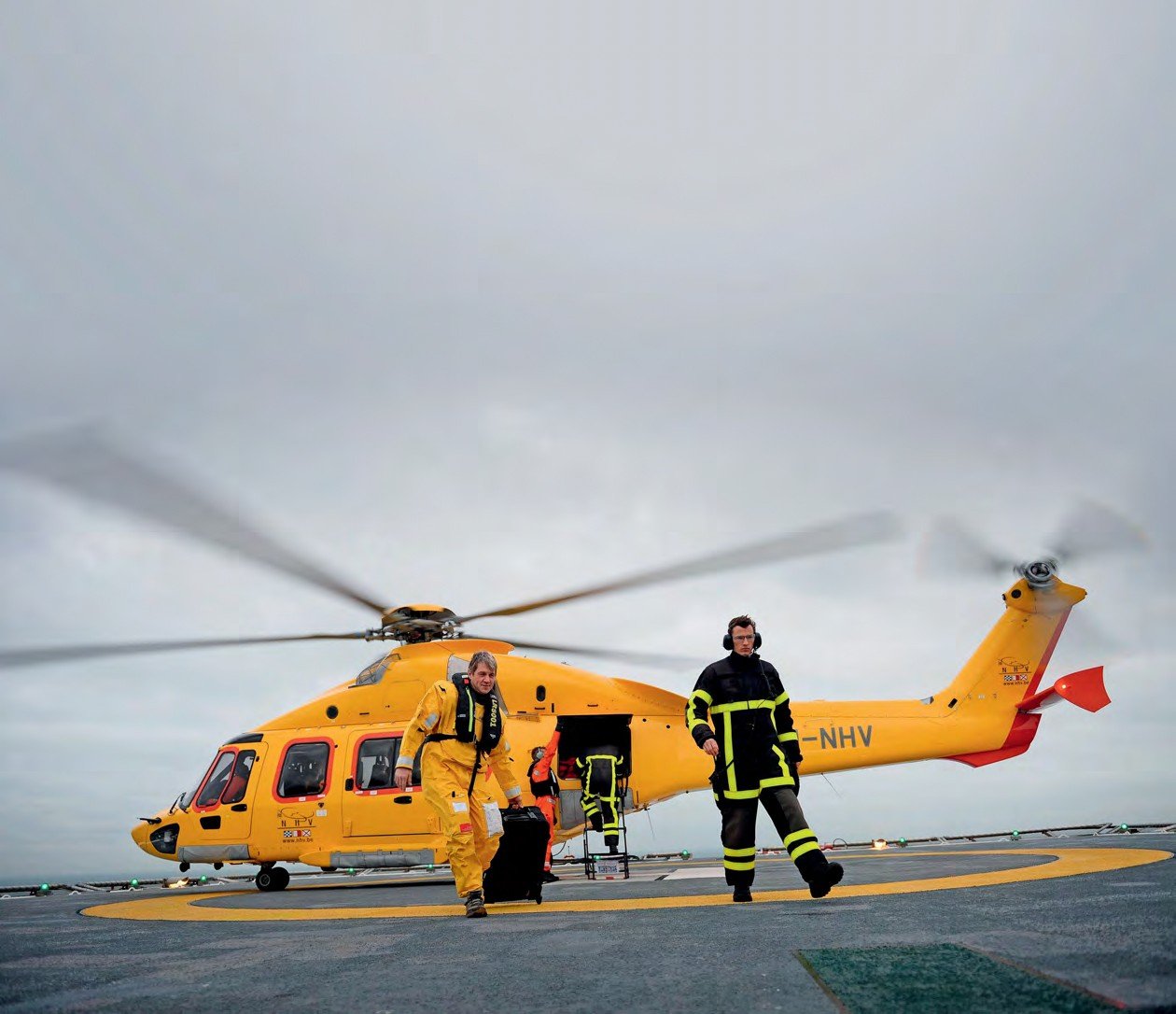