This year saw another recordbreaking Frisian Flag exercise in the Netherlands. Kees van der Mark visited Leeuwarden Air Base to report on this ever popular multinational event.

F-16AMs from Leeuwarden-based 322 TACTESS (front) and Volkel-based 312 Squadron over the North Sea. The Royal Netherlands Air Force had a relatively large number of F-16s at Frisian Flag this year, with at least 16 flying in every wave.
All photos Kees van der Mark unless stated 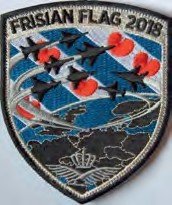 Over the past 25 years Frisian Flag has firmly established itself as one of the major live-flying exercises in Europe. Hosted and organised by Leeuwarden-based 322 Tactical Training, Evaluation and Standardisation Squadron (TACTESS), it’s very popular among participating aircrews.