Seeing almost 50 combat aircraft launch within half an hour and recover in little more time – twice a day – is not unusual at Leeuwarden Air Base in the Netherlands. It happens every year at spring time. This year, over 60 combat aircraft and 1,600 military personnel from seven nations gathered at the Dutch base to participate in Frisian Flag, one of the largest live-flying exercises held in Europe. The Royal Netherlands Air Force has more than 20 years of experience in organising this popular exercise. Participation is open to air forces from NATO members of Partnership for Peace nations and there is no entrance fee.

Little has changed in recent years in the proven concept of Frisian Flag, although latest developments and lessons learned from recent confiicts keep being implemented in the scenarios flown. Colonel Denny Traas, Leeuwarden’s base commander, said: “Nowadays, air power is very much about operating in different coalitions, with different nations. I don’t see that changing any time soon. Frisian Flag offers the training we need to be ready for that. This is one of the few occasions where we can fly with multinational packages consisting of 40 to 50 combat aircraft. For the Royal Netherlands Air Force, it is currently important that we focus on training in the whole spectrum of missions we are tasked to do. In recent international operations, our pilots were mainly flying missions to support land forces. That is why we need to train more in the air combat role right now. During our daily training programme, we fly air defence missions with four to eight jets, maybe ten on a good day. Exercises like Frisian Flag give us the muchneeded extra training in order to become fully combat ready again.”

Captain Remco, an F-16 pilot within the organising 322 Tactical Training, Evaluation and Standardisation (TACTES) Squadron and this year’s Frisian Flag supervisor, said: “Our missions are either offensive counter air or defensive counter air. They are flown under a high threat level and include air defence, elimination of static and dynamic targets on the ground and protection of high-value air assets [HVAA] like AWACS and tanker aircraft.”

One of the ten Luftwaffe Eurofighters from TaktLwG 31 ‘Boelcke’ at Leeuwarden was the wing’s flagship 31+31, which has artwork applied to commemorate Oswald Boelcke was who born 125 years ago. 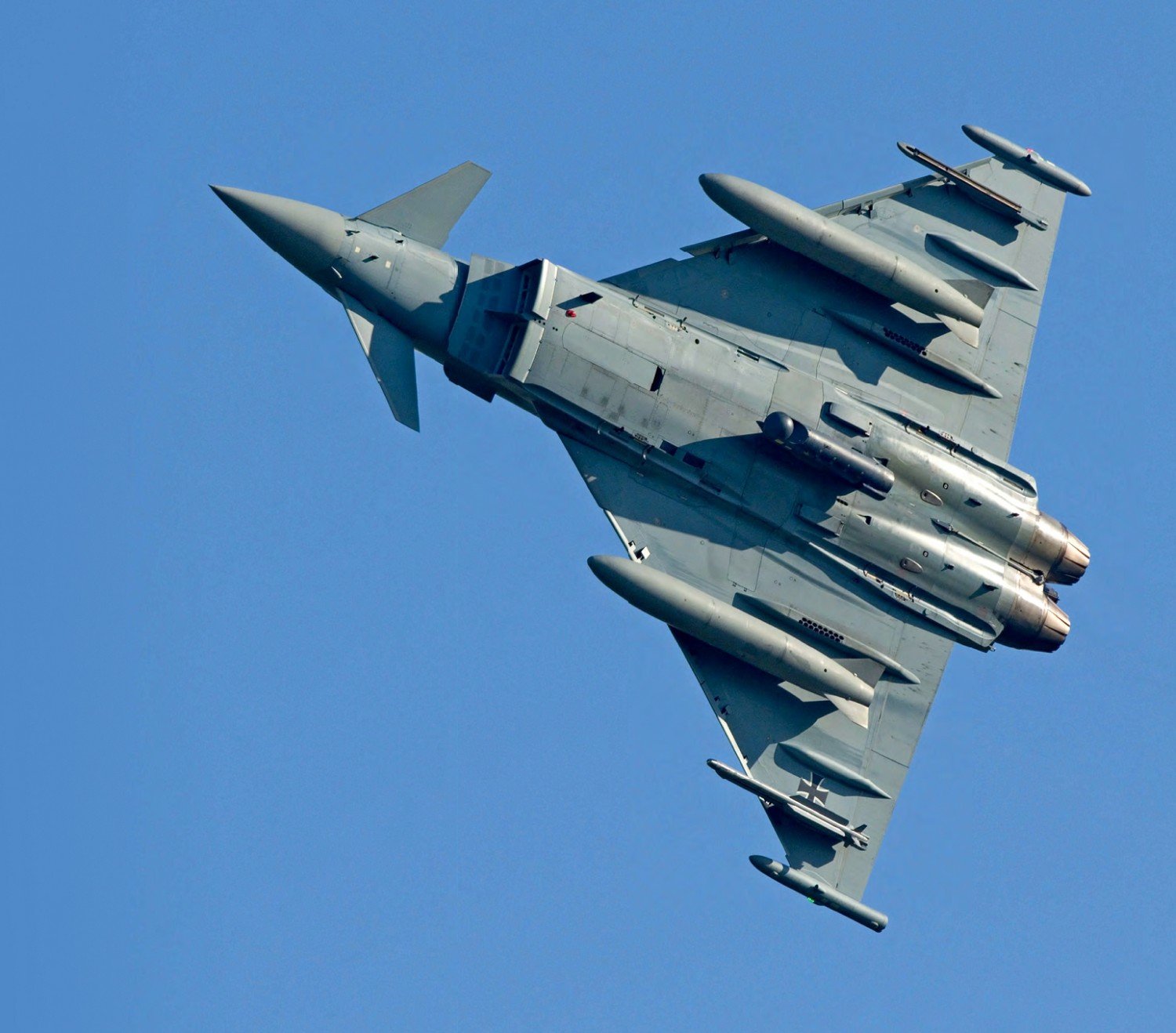 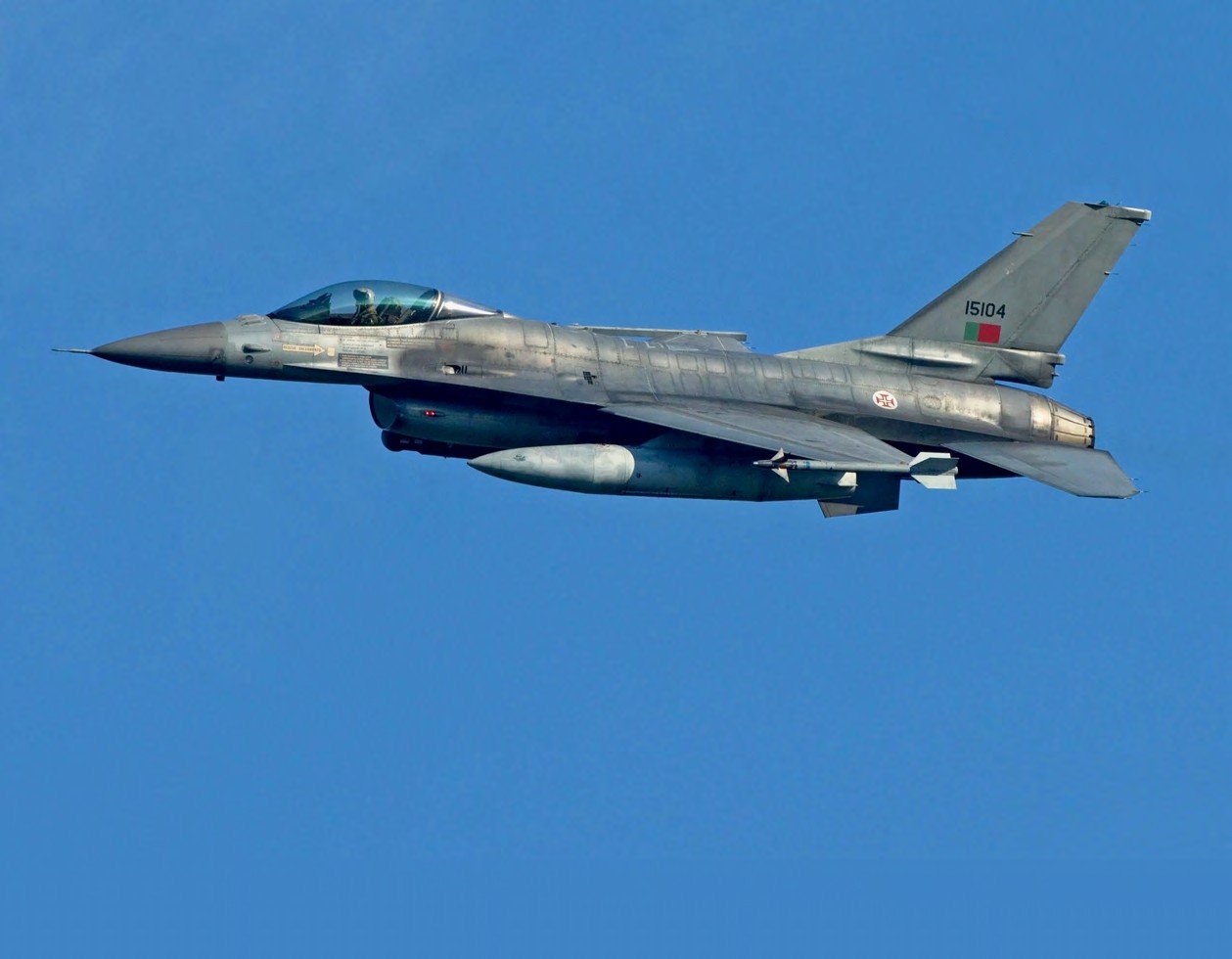 All five Monte Real-based F-16AMs had Have Glass coating applied, which helps to reduce the aircraft’s radar signature.

The participating aircraft used a large exercise area over the North Sea in Dutch, German and Danish airspace, covering roughly 120 by 180 nautical miles (222 by 333km). Frisian Flag was very fortunate with the weather and not one of the 19 waves planned between March 27 and April 7 needed to be cancelled.

German Eurofighters have participated in every Frisian Flag since 2012. As in previous years, Nörvenich-based Taktisches Luftwaffengeschwader (TaktLwG) 31 ‘Boelcke’ acted as lead wing, while additional personnel from other units complemented the 200-strong German detachment at Leeuwarden. Of the 23 pilots, for instance, 16 were from ‘Boelcke’ and the other seven from TaktLwG 74 ‘Mölders’ based at Neuburg.

At previous Frisian Flags, the German jets flew exclusively in the air-to-air role, but this year was different, as Major Patrick, a TaktLwG 31 pilot who has flown some 700 hours in the Eurofighter since his conversion from the Tornado, explained: “We are currently testing and validating the air-tosurface operations, tactics and procedures we developed for the Eurofighter in the period prior to Frisian Flag. This is actually the first exercise in which we fly the aircraft in this role. Of the eight Eurofighters scheduled to fly in each wave, a minimum of two operate in the air-to-surface role, which account for about 30% of our missions throughout these two weeks. We have a team of eight pilots here for the validation programme. Most of our jets here are equipped with Litening III targeting pods; we brought six with us. So far, we focus on the [simulated] use of the GBU-48 [Enhanced Paceway II dual-mode 1,000lb (453kg) GPS and laser-guided bomb]. Our higher command assigned us to the NATO Response Force in the air-to-surface role as per January 2018, so we have to verify that everything is actually working and we are good to go next year.”

Part of the validation programme is a bombing campaign for TaktLwG 31 in Sweden, scheduled for September. TaktLwG 31 almost exclusively uses Tranche 3A Eurofighters for the air-to-surface missions. The Nörvenich-based wing took delivery of its first Tranche 3A jet in September 2015 and so far 12 have been delivered. Eight of them came to Leeuwarden for Frisian Flag, together with two Tranche 2 jets.

Lieutenant Colonel Daniel ‘Deuce’ Fischer, the 122nd Fighter Squadron’s Commanding Officer and Detachment Commander (DetCo) during the first half of the expeditionary squadron’s six months’ stay in Europe, said: “We asked our higher command if we could start our TSP deployment a couple of weeks earlier to participate in Frisian Flag, and it got approved.”

All 12 Eagles – six each from Lousiana and Florida – were scheduled to arrive in the Netherlands on Tuesday March 21, allowing them to fly local missions with Royal Netherlands Air Force F-16s for a couple of days before Frisian Flag kicked off. In the end, the first cell of six jets arrived on Friday March 24, and the second on Saturday – only just in time to commence flying during the first day of the exercise.

According to Lt Col Fischer, “Our delay was mainly associated with the weather, which particularly hampered tanker operations. Some of our tankers were stuck in Canada [at Gander International Airport]. They had heavy snow and icing problems over there, even though the calendar said it would be spring.”

Among the F-15Cs participating in Frisian Flag was 85-0102/JZ which carries special tail markings for the 159th Fighter Wing’s commander and the name ‘Killer Legacy’. The aircraft was the only one to score three aerial victories during Operation Desert Storm, the first Gulf War in 1991. Three green stars are painted on the left side of the forward fuselage, each representing a kill.

The first cell of six jets was forced to divert to Bangor Air National Guard Base in Maine on March 21, while the second cell stayed in New Orleans. Lt Col Fischer continued: “We had to wait until the weather was good enough to get those tankers in Canada airborne. The weather over the ocean was not a factor; the sea state was borderline, but good enough. We were not going to divert into Iceland, though – they had 50ft [15m] waves over there!”

Since the ferry flights from New Orleans to Leeuwarden – which took a little over nine hours – were supported by KC-135s only, no fewer than eight tankers were needed to get all the Eagles across the pond. Along with the Eagles, some 300 personnel and ground equipment came to Leeuwarden, which required nine C-17A flights between March 14 and 22.

During the first three months of the deployment, close to 90% of the 122nd Expeditionary Fighter Squadron’s personnel is from the Louisiana Air National Guard. The remainder is from Florida Air National Guard and the US Air Force in Europe. For the second half, Florida ANG takes the lead.

Lt Col Fischer said: “The people swap, the jets will stay. If we were an active duty unit, we could probably do the whole period, but as the Guard we are able to split with a second Guard unit. One of the main reasons is that we have different missions going on. Beside our TSP commitment, we have a continuing alert mission at home, and since we are Air National Guard there could be a state mission, as well. There currently is none for us, but those can pop up at any time.

“Nowadays we deploy more that we used to, either for real-world operations or training. We are proud of what we do and are happy to take our show on the road. The main goal of this deployment is interoperability with NATO partners. TSP is about building partnerships with our NATO allies, showing our commitment by being here in Europe. I have heard about Leeuwarden ever since I joined the Air Force, so I am glad we were able to come over. This exercise gives us great training experience.”

Lt Col Fischer continued: “I have been to three Red Flags. Frisian Flag is very similar, not just because of its name. It absolutely relates, even though it is a completely different environment, with different threats and scenarios. In Frisian Flag, the planning cycles are much shorter. By streamlining the planning, more people have the opportunity to fly. It is very execution focused. Both Red Flag and Frisian Flag are really good for getting guys exposed to all the aspects of such a large exercise. For a lieutenant who has never seen it before, it can be overwhelming: the number of threats, the number of aircraft, the number of radio calls… You will be surprised just how much training value that provides.”

At Leeuwarden, one of the ‘JZ’ Eagles was carrying a Sniper targeting pod on its centreline station. When asked about it, Lt Col Fischer replied: “The Sniper pod is relatively new to the Eagle. We are still learning how to best use it, and it is continued to be integrated more. It can be helpful in an air-to-air environment. At home on alert, for instance, the Sniper is great. Say someone is flying his Cessna around and I have to figure out what his tail number is because he is not talking to air traffic control. Instead of flying right up next to him, I can now tell by using the pod.”

After Frisian Flag, the Air National Guard Eagles stayed at Leeuwarden for a few more weeks of training with Royal Netherlands Air Force F-16s and aircraft from neighbouring countries. Lt Col Fischer said: “We will be flying in the same airspace used during Frisian Flag. So we would love to fly with anybody who is around. Of course it depends on whether other squadrons are currently training in the air-to-air role, because that is all we do.”

Like previous TSP deployments, the emphasis is on operations in Eastern Europe. Next stop for the 122nd Expeditionary Fighter Squadron was Graf Ignatievo Air Base in Bulgaria, where they went on April 26.

The many Frisian Flag participants that AIR International has spoken to over the years are unanimous in their verdict that Frisian Flag is a very useful exercise. Or as Lt Col Fischer put it: “We have only been here a few days, but already it has been great: the organisation, the hospitality, the interaction, the willingness to learn, share ideas and trying to be positive. That is the unspoken benefit of this. Sitting together and talk about: ‘How did this really go? How could we have done better?’ That is hugely important.”

Leeuwarden is scheduled to take delivery of the first two Netherlands-based F-35A Lightning IIs at the end of 2019. Previous plans foresaw F-16 operations at the Frisian air base come to an end in 2018 and the jets relocating to Volkel Air Base. Frisian Flag would be skipped in 2018 and possibly 2019, as well.

However, things have changed, as Col Traas revealed during the Frisian Flag media day: “We will continue flying F-16s at Leeuwarden until 2021, and there will be another Frisian Flag in 2018 – and probably also in 2019. We will see what happens in 2020–2021.

“For next year’s exercise, we are looking into the possibility of having fifth-generation aircraft participate for the first time. It will not be Royal Netherlands Air Force jets, as they will be too busy in the OT&E [Operational Training and Evaluation] programme at Edwards until 2019, but United States-based F-35As or Royal Air Force F-35Bs could be a possibility.” 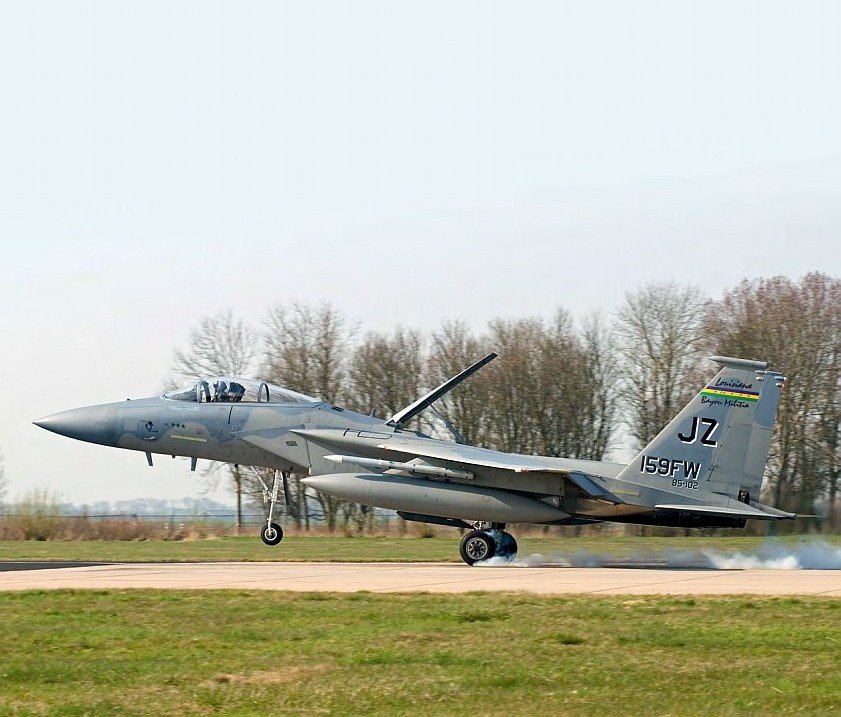 F-15C 85-0102/JZ, the 159th Fighter Wing commander’s aircraft, was the only Eagle participating in Frisian Flag fitted with a AAQ-33 Sniper targeting pod. The aircraft has three green stars painted under the windshield, each representing an Iraqi Air Force jet shot down during Operation Desert Storm.