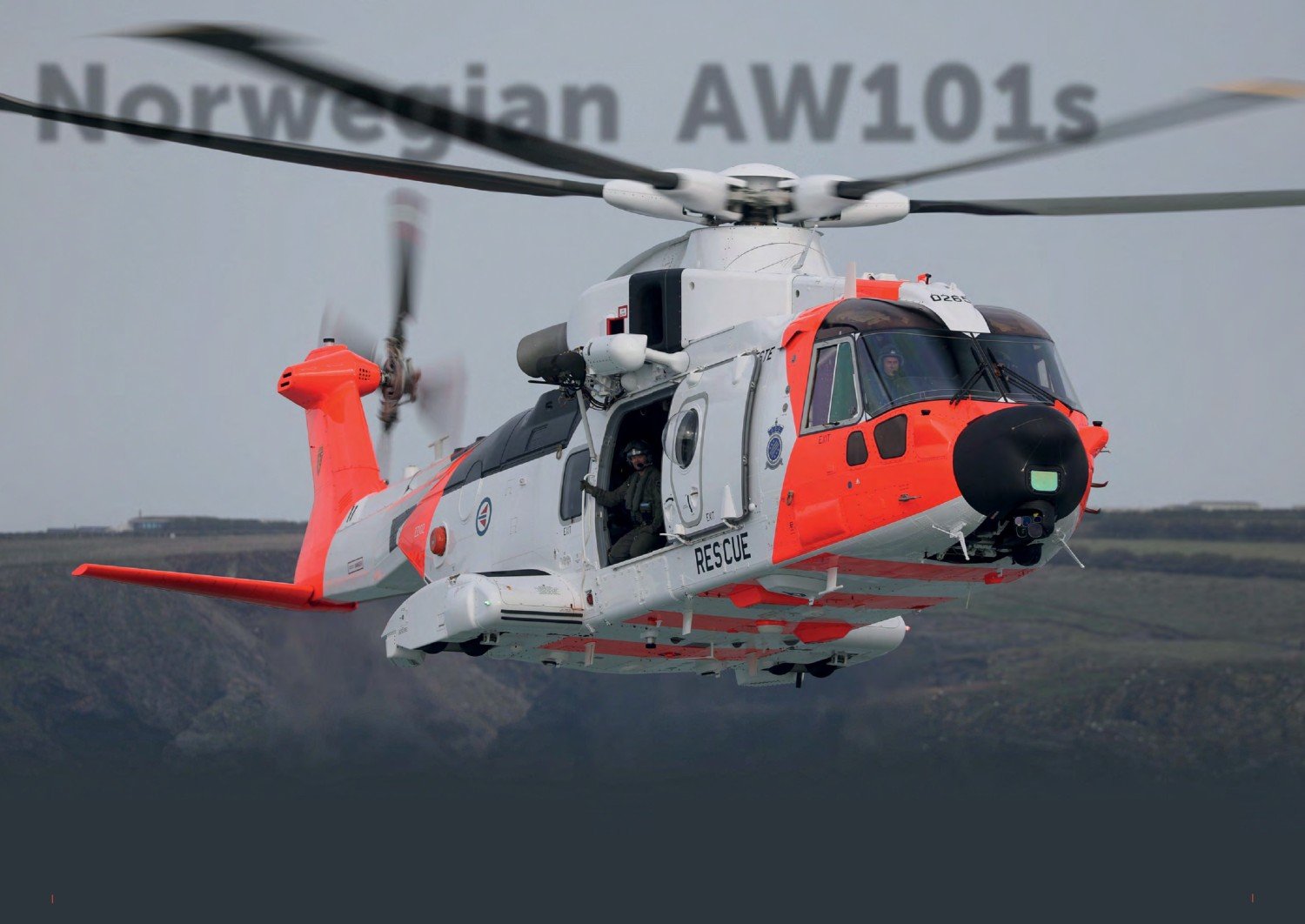 Norway’s AW101 is the first variant to be equipped with Leonardo-Finmeccanica’s Osprey AESA radar which provides a 360°fffield of view. The system comprises three flat panels; one in the aircraft’s nose cone and two at the rear of the aircraft facing outward to create a 360° view. The system enables flight crew to electronically steer the radar beam to obtain radar images which are then fused with other sensor data to develop a clear image of flying conditions.
All images Ian Harding unless stated otherwise

When a nation chooses a new helicopter, the ancillary support provided by the manufacturer is almost as important as the helicopter itself. In recent years, Leonardo Helicopters (LH) has invested heavily in a range of through life support and training packages, including synthetic systems, at its training academies at Yeovil, Somerset, UK, Sesto Calende, Italy, Philadelphia in the United States and Kuala Lumpur, Malaysia. This investment includes extending its main training facilities at Sesto Calende with flight-crew simulators covering its full helicopter range, AW109 (Power, Nexus and LUH modules), AW139, AW169 and AW189, plus aft cabin crew trainers. Tailored to meet customer needs, these solutions range from the provision of spares, through to crew training and finally, a fully integrated turnkey support programme. Introducing new technologies creates new challenges for customers - building mission systems expertise and maintenance facilities, for example, and how to manage components made from composite materials. Customers increasingly rely on outside support, not only in the period immediately after the initial acquisition but throughout an aircraft’s service life.

On December 19, 2013, AgustaWestland (now Leonardo Helicopters) signed a contract with the Norwegian Ministry of Justice and Public Security for the supply of 16 AgustaWestland AW101 Mk612 helicopters (plus options for six more). The AW101s will replace the Luftforsvaret (Royal Norwegian Air Force) fleet of 12 Westland Sea King MK43B helicopters which, serving with 330 Skvadron, Norway’s dedicated search and rescue and air ambulance squadron, have saved over 40,000 lives since 1972. Deliveries of the 16 aircraft commenced in March 2017 and are scheduled to be complete in 2020; the Sea King’s scheduled out of service date is 2021.

It is no simple task for aircrews to jump from a 47-year old Sea King into a new generation AW101. For this reason, Norway and LH agreed on an initial 15-year turnkey support package following which Norway will have developed the infrastructure to complete much of the work included in the package itself. To achieve Norway’s required 99% aircraft availability rate LH will deliver spares, technical support and training services at six Luftforsvaret bases: Banak, Bodø, Florø, Sola (Stavanger), Ørland on the Atlantic coast and Rygge on the Skagerrak. To guarantee this level of service availability, LH needs to understand precisely what the spares requirements at each base are and work with the main support base located at Aerospace Industrial Maintenance Norway (AIMN) facility at Kjeller in southern Norway which will provide maintenance, spares storage and specialised repair facilities.

For Norway, a combined test team and numerous working groups have been based in Yeovil from the start of the programme. It is investigating all aspects of the new system from crew facilities, medical layouts and hangar facilities to flight testing and crew training. To ensure LH fully understood Norway’s training structure and requirements, it completed a training needs analysis in 2013 which is regularly reviewed, evaluated and modified.

This type of integrated support contract is considered the best way to reduce in-service costs during the life of the platform. It transfers the support risk (for aspects such as spares, sustainment, technical advice and aircraft issues) from the customer, the Norwegian Ministry of Justice, to LH, which will deliver crew training, in a staged manner allowing the operator, the Luftforsvaret, to concentrate on operational effectiveness.

As part of its training system, Leonardo Helicopters opened the AW101 Norway Training Centre on June 13, 2017 at Sola-Stavanger Airport. Located close to the main airport, the centre is easily accessible for aircrew from around the world to attend type conversion courses, refresher training and specialised operational training for the AW101 helicopter. It includes a new AW101 full flight simulator (FFS) for the use of not only Norwegian aircrew but other AW101 customers too. The first Luftforsvaret training course commenced the day after the centre was opened, before delivery of the first two aircraft. 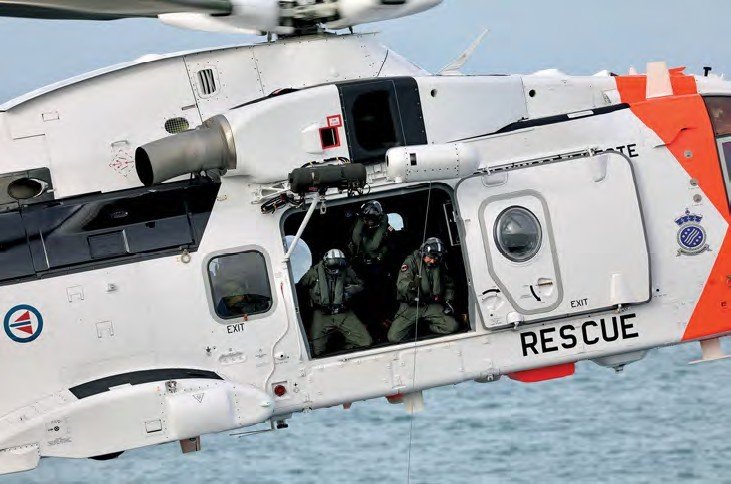 Jointly developed by LH and CAE to Level D, the highest qualification for commercial flight simulators, the FFS is a CAE series 3000 device. Located in a new annex within the Thales Flight Training Centre, the simulator is operated and managed by LH to deliver its wide range of training courses. The centre also houses a Luftforsvaret-owned AW101 SAR console training device that is linked to the FFS to provide aft cabin crew training. Each SAR base will eventually have a synthetic training device whilst one maintenance training facility is at Kjevik. LH has been heavily involved supporting the stand-up of Norway’s first AW101 base at Sola.

This new AW101 FFS features unprecedented realism for helicopter-specific mission training, including search and rescue (SAR), offshore transport, combat SAR and naval operations. The simulator will enable pilots to practice challenging procedures without risk, such as low-level flight, confined area operations, auto-rotations and landing on platforms at sea. The simulator features include:

The FFS can be linked with the systems operator console simulator in the same building to enable crew coordination and full mission simulation. Linking simulators together represents the future. 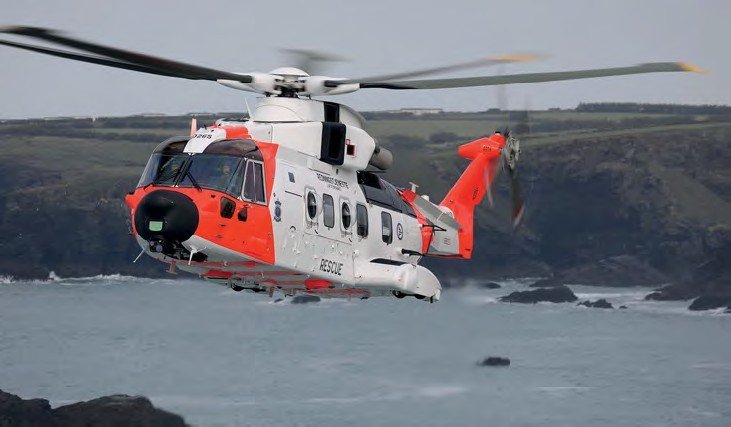 Norway 03 performing search and rescue training during the OT&E phase.

Norway’s AW101 Mk612 is the most advanced variant produced to date with systems and an internal layout unique to Norway. Analysis has ensured Norway’s air and ground crews receive training that meets their specific requirements, however, keeping instructional material up to date with individual aircraft developments is a constant challenge. The training academy develops its own training material as the customer receives its aircraft. This material is then further developed using an in-house aircraft management system to keep abreast of the systems aboard a particular aircraft ensuring definitive training.

Initial Norwegian instructor crew training commenced at the Yeovil training academy in July 2016. These qualified instructors then returned to Norway as the nucleus of the country’s AW101 training system, which now includes an FFS owned by LH at Sola. In total, 29 flight crew, nine Kjevik training school instructors and 111 engineers and support staffwere trained in Somerset.

Training continues at Yeovil although some of the more bespoke operational test and evaluation took place at Newquay Airport in Cornwall. Refurbished in 1997, the Yeovil academy currently houses 12 state-of-theart electronic classrooms which are used to deliver aircrew, ground crew and maintenance training to its various UK and international customers. Dedicated composite repair training facilities for teaching the specialised procedures required for those materials are also in place.

Conversion training proceeds step by step using synthetic systems as well as an AW101 airframe to inculcate students with a complete understanding of the helicopter and its systems.

At the start of their course, each student receives a tablet loaded with the modular coursework enabling them to access course emulations at any time. An examination is sat at the end of each module allowing the instructor to see how the individual is performing, and the ability to provide input or additional corrective tuition if required. Leonardo says customer satisfaction with the system is at 92%.

The academy started with five Norwegian training courses running simultaneously, each class comprised a maximum of ten technicians or four aircrew. In total, the academy delivered 37 Norwegian coursesteaching 238 students, the largest number for an overseas nation.

The first operational conversion course for Sea King crews converting to the AW101 began in October 2018.

Integrated mission avionics provides the two pilots and mission system operator (MSO) with good situational awareness and mission-critical data. In addition to the three crew mentioned above, a full crew will include a flight engineer, a rescue man (who is a trained paramedic) and a doctor. As with other modern helicopters, the Norwegian AW101’s configuration allows the flight engineer and MSO to operate the aircraft’s hoist. The role of the MSO, positioned in the aft cabin, is primarily to coordinate the mission routing and search profile, and manage communications with other agencies using a dedicated mission console.

Each pilot completes six weeks of tuition at the academy to learn the aircraft’s systems before moving to simulator training. Instructor pilots complete three components of training; eight hours of conversion to type (CTT), two hours of maintenance test flying and ten hours for competency to instruct (CTI).

Norway’s concept of ops deems a flight engineer as both aircrew and a maintainer, which requires a specific nine-week ground school curriculum, and five weeks working alongside flight crew in the simulator.

Rescuemen and doctors each complete a week of individual training before rescuemen participate in flight training.

To maintain its flight crew concept, two pilots, an MSO and a rescueman must fly together on each sortie flown in the flight training phase, though the sortie is primarily aimed at the pilot.

Engineers complete modular engineering courses dubbed B1 and B2 depending on which discipline they represent, each lasting nine weeks and compliant with European Aviation Safety Agency Part 66 regulations. In addition, specific training is given to fire and rescue crews; a potential role identified for Norway’s AW101. Future instructor training will be completed by the Luftforsvaret. 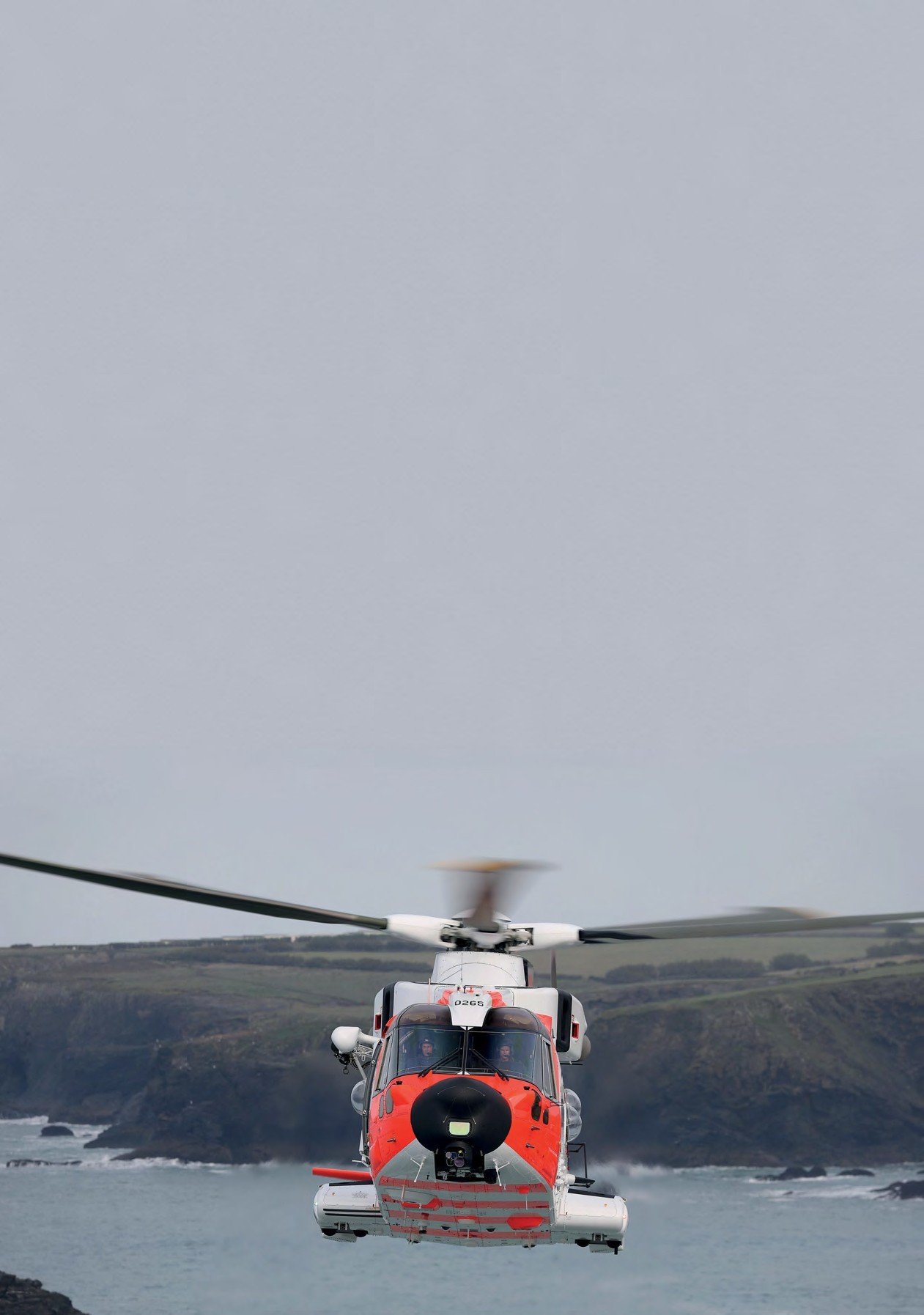 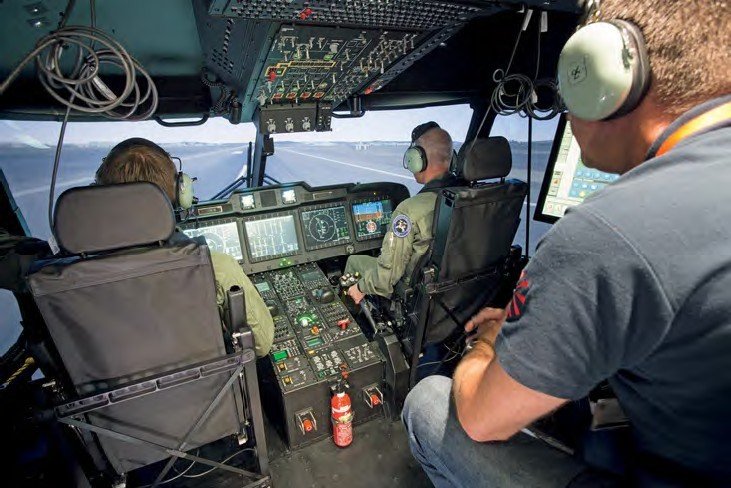 Phase one of Norway’s AW101 training programme included senior personnel from Norway’s AW101 operational test and evaluation unit based at Sola. Two classes from the unit completed flight training at LH’s Newquay facility in July and September 2017 instructed on CTT, CTI and maintenance by LH’s test pilots and aft cabin crew. When the initial cadre returned to Norway it started OT&E on the first aircraft. The OT&E programme is expected to run for more than 18 months to establish standard operating procedures and training programmes. Following that, the OT&E flight crews will train with 330 Skvadron at Sola, which is currently expected to start by the end of 2019; the remaining five SAR detachments will follow, Orland being first. Follow-on OT&E activities will continue to certify all aspects of the initial aircraft configuration.

An initial group of Norwegian SAR students completed CTT in October 2018. Since then, all subsequent students have received their training from Norwegian instructors and LH field service representatives at the Luftforsvaret Training Centre in Kjevik. The objective is to train enough people to enable SAR facility to stand up.

Norwegian instructors from Kjevik have been embedded at the academy for more than a year receiving technical training and helping to develop course material. LH field service representatives and academy staffwill continue to support the Norwegian students.

Terrain, weather and the nature of Norway’s SAR requirements, make the assignment one of the toughest in the world such that the support contract is bound to challenge LH at all levels, most notably ensuring the required 99% aircraft availability. AI