The Lufthansa Group has ordered 40 new twin-aisle widebody airliners for the group’s airlines, numbering 20 Airbus A350- 900s and 20 Boeing 787-9s. The aircraft will be delivered between late 2022 and 2027 and will predominantly replace four-engine aircraft. The decisions on which Lufthansa Group airline will deploy the aircraft will be made subsequently, the airline said, although a graphic released by the group showed the A350s in Lufthansa livery (the airline operated 14 A350-900s by April 2019) and the 787-9s wearing the liveries of Lufthansa and sister carriers Austrian and Swiss. Mark Broadbent

SIA Engineering Company Limited (SIAEC) and NokScoot Airlines have entered into a joint venture agreement to form a line maintenance joint venture based in Thailand. Under the agreement, NokScoot will hold an equity stake of 51% and SIAEC taking the remaining 49% stake. The agreement is subject to the receipt of regulatory approvals. The joint venture will commence operations in Don Mueang International Airport and subsequently expand to other key airports in Thailand. 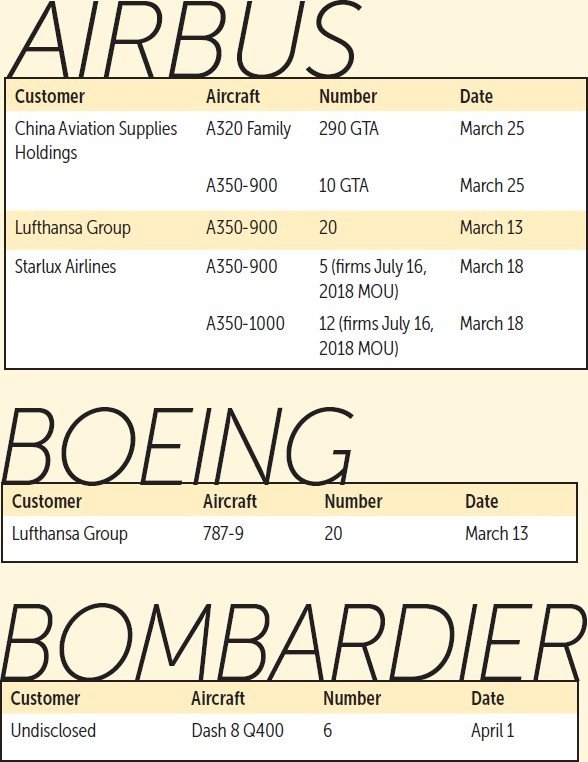 As part of the twin-aisle order announcement, Lufthansa confirmed it will phase-out six of its 14 A380s in 2022/2023. The super jumbos will be bought back by Airbus as part of the A350-900 deal. Lufthansa said it was reducing its A380 fleet size “for economic reasons”. Mark Broadbent

Airbus received one of its largest single aircraft orders in March when China Aviation Supplies Holdings signed a General Terms Agreement for 300 jets, comprising 290 A320 Family aircraft and ten A350-900s. The Chinese market already has more than 1,400 A320s in service. Mark Broadbent

Ryanair has secured traffic rights for a four-times-a-week service to Algeria, with flights operating between Milan/ Bergamo (Orio al Serio International Airport) and Algiers. The rights were awarded by Italy’s Civil Aviation Authority, which stated that flights can begin for the 2019 summer season. In Africa, Ryanair flies to Morocco. Guy Martin

Cathay Pacific Group has acquired 100% of HK Express. The transaction is expected to conclude by December 31 this year. The carrier will become a wholly owned subsidiary of Cathay, but it will continue to operate as a standalone airline using HK Express’ low-cost carrier business model. Mark Broadbent

American Airlines has announced it is to introduce Airspace XL overhead baggage bins to its entire A321 fleet. The carrier had previously said the 100 A321neos it has ordered from Airbus (the first of which entered service with the airline on April 2 on the route from Phoenix to Orlando) will all be equipped with the new bins, which provide approximately 40% more overhead storage space for passengers on board the 196-seat aircraft. American now also plans to retrofit its entire in-service fleet of earlier A321 models with the feature. Mark Broadbent

In early April, Singapore Airlines grounded two of its Boeing 787-10s. Routine inspections had shown premature deterioration in the fan blades in the Rolls- Royce Trent 1000 TEN engines powering the aircraft. This was the first reported engine issue involving the Trent 1000 TEN and therefore the ‘Dash Ten’ version of the 787 Dreamliner. Operations of Trent 1000 Package B and Trent 1000 Package C-powered 787s have been disrupted due to a series of engine issues that Rolls-Royce is working to rectify. A Rolls-Royce statement said: “Working with operators, we have been sampling a small population of the Trent 1000 TEN fleet that has flown in more arduous conditions. This work has shown that a small number of these engines need to have their blades replaced earlier than scheduled.” Rolls-Royce said its engineers were already developing and testing an enhanced version of the turbine blade. Mark Broadbent

Ryanair Sun will be rebranded as Buzz this autumn, with its Boeing 737-800 aircraft receiving a distinctive new livery. This standalone business unit of the Ryanair Group has been operating on a Polish air operator’s certificate since the beginning of 2018. It operates charter services and scheduled Ryanair flights. Having started operations with five aircraft, its fleet now includes 17 aircraft and will expand further this summer to 25 aircraft. Buzz is one of four airlines of the Ryanair Holdings Group, alongside Ryanair DAC, Laudamotion and Ryanair UK. Mark Broadbent

Airbus recently used its A330-900 test aircraft F-WTTN (msn 1795) to transport 26,000kg (57,320lb) of emergency goods from Geneva, Switzerland, to Maputo, Mozambique, as part of assistance in the wake of Cyclone Idai, which ravaged Mozambique, Malawi and parts of Zimbabwe in mid-March. The flight, which departed on March 25 and arrived in Maputo the following day, was organised by the Airbus Foundation and the International Federation of Red Cross and Red Crescent Societies. Guy Martin

Airbus has extended its Airspace Customer Definition Centre (CDC) in Hamburg by including a space for the A320 and A330 programmes, as well as the A350. The new facility adds approximately 4,500m² (232m2) of new space over two floors in an industrial loft-style, two-storey mezzanine. It is designed to enable A320 and A330 customers to develop integrated cabin solutions for their aircraft, with features including mock-up areas and presentation and conference rooms. The CDC, originally opened in 2014 for the A350, centralises the processes Airbus customers go through to configure the interiors of their aircraft. It provides various virtual-reality aids, equipment testing areas and cabin mockups, including a projection system which displays the full-scale real cabin layout on the floor. Mark Broadbent