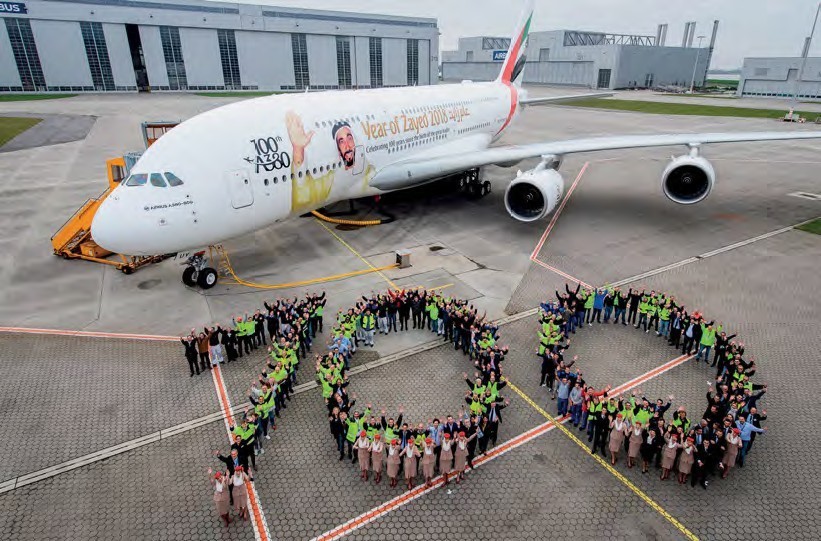 Emirates has received its 100th Airbus A380. The aircraft, A6-EUV (msn 239) features ‘100th A380’ markings and a paint scheme depicting the late Sheikh Zayed bin Sultan Al Nahyan, the United Arab Emirates’ founding father. Emirates has another 42 A380s on order, with some media reports s uggesting it could soon order more. Mark Broadbent

WestJet has increased its purchase of Boeing 737 MAX 10s, adding five more aircraft to its purchase agreement, which takes its total orders for the variant to 12. WestJet has also amended its other 737 family orders, switching four 737 MAX 8s and three 737 MAX 7s for seven 737 MAX 9s. The switch was revealed in WestJet’s third quarter earnings. WestJet has also confirmed its new ultra-low-cost carrier unit, Swoop, will operate under its own air operators certificate. Mark Broadbent

An agreement has been reached for part of Air Berlin’s operations at Berlin-Tegel, which have been acquired by easyJet, boosting the UK carrier’s German market presence. Subject to regulatory approval, easyJet will take on up to 25 Air Berlin A320s and slots. With a hub at Berlin-Schönefeld, easyJet now operates more flights from the German city than any other carrier. The European Commission will make a final ruling s oon. Mark Broadbent

Qatar Airways has purchased 9.61% of Cathay Pacific Airways, making it the third-largest shareholder in the Hong Kong-based carrier behind the Swire Group and Air China. The deal is Qatar Airways’ first investment in an Asian airline and is another sign of the Gulf carrier broadening its global influence; it has previously bought minority holdings in IAG, Alitalia and LATAM. Mark Broadbent