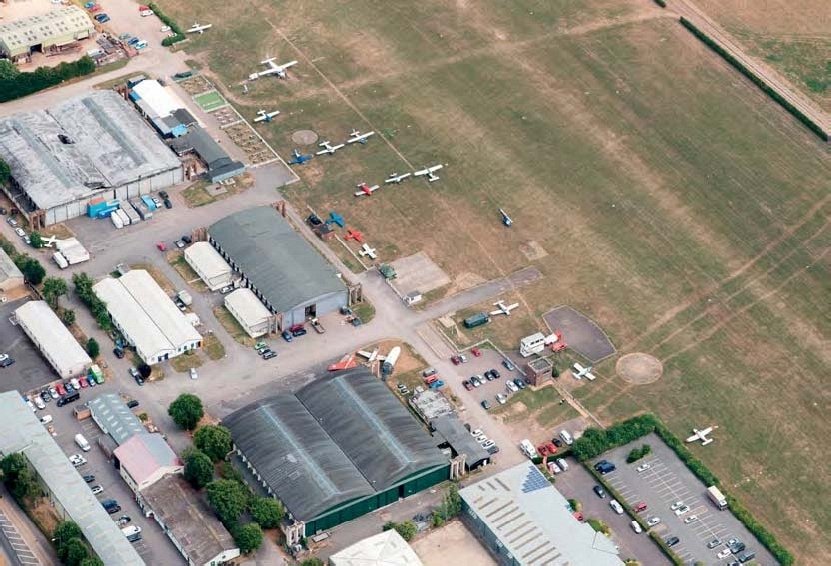 Old Sarum has long been a busy general aviation airfield, but its future in flying terms is now under threat. HERITAGE IMAGE PARTNERSHIP/ALAMY

Not for the first time in recent years, some of our most historic airfields are facing threats to their existence. Among them is one of the oldest operational aerodromes in the UK.

Old Sarum airfield, near Salisbury in Wiltshire, was opened in 1917, many of its buildings apparently being constructed by German prisoners of war. Its surviving original buildings include three World War One Belfast truss hangars although, worryingly, one has seemingly been allowed to lapse into a parlous state.

At the beginning of August, owners of aircraft based there received a letter from the airfield owners, giving notice of termination of their tenancies at the end of October. The longterm lease on the airfield was acquired by Matthew Hudson and the Blanefield Group in 1986 as part of their purchase of Edgley Aircraft, makers of the Optica. Since that manufacturer’s demise the airfield has remained busy with private owners, flying schools and a parachute centre. Despite this, Blanefield claims Old Sarum isn’t viable in its current form, and five years ago unveiled a ‘revitalisation’ programme to be funded by around 450 houses on the airfield periphery.

Following objections to the housing from local residents, the planning application was rejected by Wiltshire Council. Immediately following that, Blanefield served its notice of eviction on the aircraft owners, potentially ending more than 100 years of flying at the site.

So, is this merely a means of kicking back against the council, or does Old Sarum genuinely have a major viability crisis? Various parties, including the airfields working group of the All-Party Parliamentary Group on General Aviation, have offered to act as arbitrators. Hopefully, wiser heads intervening will keep Old Sarum flying.

Another case of the understandable wish of a landowner to maximise its investment return has led to concerns for the future of Bicester airfield in Oxfordshire. It has long been regarded as a heritage gem, a timewarp collection of original buildings surrounding one of Britain’s last omnidirectional ‘flying fields’, an 800-yard grass circle with no marked runways, allowing intowind operations by a collection of vintage aircraft based there.

Bicester is an internationally recognised heritage location as a uniquely preserved example of an inter-war bomber aerodrome, complete down to its original hangars, technical buildings, and even bomb dumps and air raid shelters. Many are Grade 2-listed and areas of the site have UNESCO World Heritage status.

In 2013, Bicester Heritage acquired the airfield and, led by CEO and vintage car racer Dan Geoghegan, focused on redeveloping the technical area as a hub for the vintage car restoration movement, using restored buildings as sub-let workshops, offices and showrooms. In April this year, Bicester Heritage announced via the national media its plans to widen the scope of these activities. The Daily Telegraph reported, “The airfield will remain, albeit bisected by two new strips of tarmac. These will divide the existing perimeter road into ‘The Radial’, a highishspeed recreational driving circuit, and an access road connecting the existing Bicester Heritage with the rest of the site”. The article went on to describe the site as an automotive “experiential [sic] resort”, called Bicester Motion.

The most worrying implication of the proposal is that it bisects the airfield with two asphalt test tracks, ruining its unique nature and rendering a third of the airfield unusable for any form of fixed-wing flying. Not only that, but it was intended that these tracks be sunk by up to 3ft below the airfield surface in an attempt not to spoil the visual aspect. The safety implications for aircraft operations are obvious.

The positive news is that Geoghegan has subsequently engaged in dialogue with local aircraft operators. It is hoped that a suitable compromise can be achieved by moving the tracks closer to the existing airfield perimeter track and abandoning the idea of sinking them below the airfield. This would be a good, commonsense solution, allowing Bicester to retain its status as an outstanding location for both historic motoring and aviation.