C-130H 92-3284/6Z of the 96th Airlift Squadron, the modern incarnation of the 96th Troop Carrier Squadron which participated in Operation Market Garden in September 1944, at Eindhoven Air Base. All images Ludo Mennes

BETWEEN SEPTEMBER 19 and 22, Exercise Falcon Leap was staged at Eindhoven Air Base in the Netherlands under the supervision of 336 Squadron. Over 750 paratroopers from seven countries participated, which ended with the 74th commemoration of Operation Market Garden on September 22.

Jumps were undertaken from three flights per day, although the operations on September 21 were cancelled due to windy conditions.

For the commemoration on September 22, two more C-130 Hercules, one from Belgium and one from the UK also participated to drop around 1,000 paratroopers in three flights over the Ginkelse heath; traditionally the scene of all remembrance activities, and the original drop zone during Operation Market Garden on September 17, 1944.

The forward fuselage of C-130H 92-3284 showing the World War Two style code 6Z and nose featuring a duck, and the legend ‘Flying for Minnesota’. 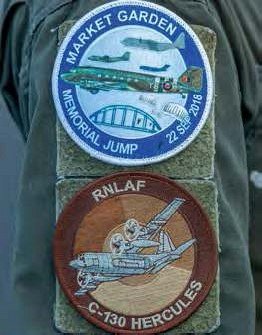 The badge worn by aircrew participating in the Market Garden Memorial Jump 2018.