The past year and the road ahead

As I’m sure many of our readers are aware, we have reviewed quite a number of Orbx products over the past year and it’s been our observation that the company has released far more than many of the other developers combined. With that in mind, we asked Orbx’s CEO, John Venema, to give our readers his views on the current state of the flight simulation industry from Orbx’s perspective. We also invited him to outline his plans for the coming year. 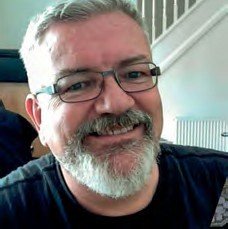 London is the jewel in the crown from TrueEarth GB South.

PC Pilot: Hi John, thanks for agreeing to take part in this interview. May I start by asking you to give an overview of your 2019 product releases by platform?

John Venema: Our focus this year has been on new airports for both P3D and XP11, and in particular porting a lot of our legacy airports from the UK and Pacific Northwest to XP11 to coincide_with the TrueEarth regions. As for TrueEarth, we are continuing to build these out for XP11 following the GB series, working all the way down the USA West Coast and then onto Florida. If you want to track each specific release since January 1 this year, visit this subforum and sort by date -https://orbxsystems.com/forum/forum/217-orbxdirectrelease-announcements/

PC Pilot: Do you think you got the mix right in terms of individual airports, global and TrueEarth products?

John Venema: I hope so! We only released 37 products in 2018/19 but we’re on track to release 125 products in 2019/20. Our financial year runs from July to June. There has been a perception that we have ‘abandoned’ P3D due to the number of ports of legacy airports to XP11 but nothing could be further from the truth. We are releasing more content for P3D than ever before, including some blockbusters such as Australia V2 and openLC Africa, while work has begun on openLC Asia. Then there are P3D-exclusive airports as well. I think the mix between TE regions_and airports has been good.

A shot from Australia V2 for P3D v4. Below: Edinburgh is included in the TrueEarth GB North product. Right: Innsbruck is one of the most comprehensive and popular airports ever produced by Orbx.

PC Pilot: What feedback have you had from your customers regarding the products you released in 2019 for the different platforms?

John Venema: Generally positive. If you look at the roadmap we published last December we would have a pretty strong scorecard on delivering on our promises. We’ve always enjoyed very positive feedback from our customers since we started out and this has not changed.

PC Pilot: Have any products posed particular difficulties over the course of their development?

John Venema: Some of the data for the UK is hard to license, such as the nice 10m/pixel elevation mesh for Scotland which a supplier wanted £50,000 for! We also sometimes find it hard to get tree data, which means for much of Scotland we have had to hire junior developers to hand-mark the locations of all the trees in Edinburgh and other cities. This will be rolled out in a service pack. The same applies to Northern California. We actually ended up downloading terabytes of LIDAR data [a very accurate model of the earth’s surface - Ed] and using our own in-house code to create tree-height data - not a trivial task! 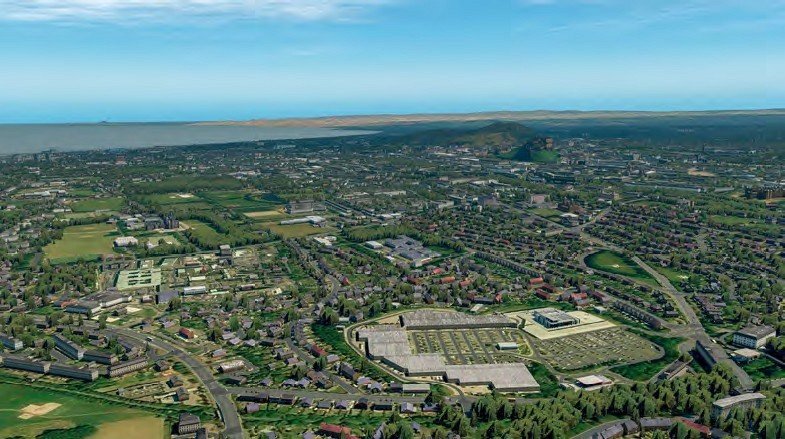 Not a dedicated version, yet Heathrow looks very impressive in TrueEarth GB South.

PC Pilot: By comparison, have any products exceeded your expectations?

John Venema: TrueEarth GB South has been an absolutely star product; it’s exceeded all forecasts. Other star products are LOWI Innsbruck for all platforms, Buildings HDs for FSX/P3D and of course Orbx Global Base just keeps on being our all-time best seller.

PC Pilot: Similarly have any products, regardless of the platform, been disappointing in terms of uptake?

John Venema: Some of the minor airports we have ported from FSX/P3D to XP11 have not sold particularly well. I guess that comes down to the feature list and perhaps the XP community has a good choice of quality freeware to choose from already.

PC Pilot: From Orbx’s perspective, which is currently the most popular platform?

John Venema: Easy, that is Prepar3D. Over 70% of our revenue comes from that platform, although XP11 is creeping closer to 15% now, which is remarkable given we’re just over a year into serious development for it.

PC Pilot: While I appreciate you don’t want to give away too much, but have you anything exciting you can tell us about that you currently have in development?

John Venema: We have a roadmap of 91 more new products and ports to XP11 between now and June 30, 2020. That includes new IP airports for both P3D/XP11, some new cityscapes, new TE regions and also we’ll be publishing many aircraft from third-party companies such as MilViz, Echo Papa Developments and a few more companies not yet announced.

PC Pilot: Would you agree that the shift of X-Plane 11 to 64-bit has had a major impact on sales of X-Plane products when compared to the other platforms over the course of the last 12 months?

John Venema: Yes, I think so. It appears to us that many of the leading FS developers are either now creating content or planning to do so for XP11. The community around that sim has had mostly a freeware third-party community for a long time, so it is adjusting to having to pay for quality add-ons but from our experience, if you make something appealing enough they will support developers, for sure. 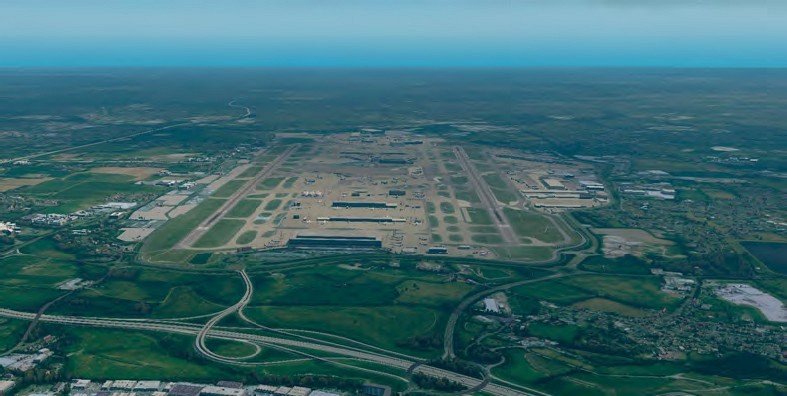 PC Pilot: Do you intend to support all the current platforms in 2020?

John Venema: Yes of course, although we are scaling back on Aerofly FS 2 because of less than expected sales performance, but P3D and XP11 development will continue unabated.

PC Pilot: I assume you’ve been following the development of Microsoft’s latest flight simulation product. Have you formed an opinion of it at this early stage that you can share with our readers?

John Venema: It is undoubtedly a technological tour-de-force. The early publicity for it from Microsoft has most everyone open-jawed and wanting to know more. So from a visual point of view, it ticks just about every box on people’s wishlists for the past decade.

PC Pilot: Given the mechanics of Microsoft’s new simulator, which I understand draws its data from Bing mapping, do you envisage supporting the new platform with scenery products?

John Venema: Yes of course we plan to, just like almost every scenery developer will. It’s difficult to comment until the FS industry has access to the SDK which I am sure Microsoft will get into everyone’s hands soon enough.

PC Pilot: Do you see this new product as a ‘challenge’ to the way Orbx operates its business?

John Venema: Not at all. From what we have seen and read/heard from various interviews with MS and Asobo Studio they are keen to see third-party content in the new sim, so we’ll embrace the new platform just like the rest of the development community will.

PC Pilot: If it turns out to be as good as it first looks, do you think it will impact on the ongoing development of the other platforms?

John Venema: It depends what the flight simulation community does. We are in the business of selling to simmers who use the most popular platforms. If support for the established platforms falls away and shifts to new emerging platforms, then we will naturally begin to allocate resources to where the best opportunity for sales will be. That is just how business works. We are a collective of artists first and foremost but we still need our art to be_purchased in order to keep doing what we love.

PC Pilot: Last time we spoke, I wondered if Orbx was going to populate the world with TrueEarth scenery. You said “to do so would require unrealistic amounts of local storage”. It seems that this latest development from Microsoft has found a way to overcome this limitation. Would you consider this online solution for your own products?

John Venema: There is plenty of scope for TrueEarth type of enhancements to the new sim, even if they provide streaming orthoimagery. Keep in mind that TE provides much, much more than just orthoimagery. It’s a combination of many different layers to deliver a cohesive VFR flying solution, so the opportunity is still there, just different. 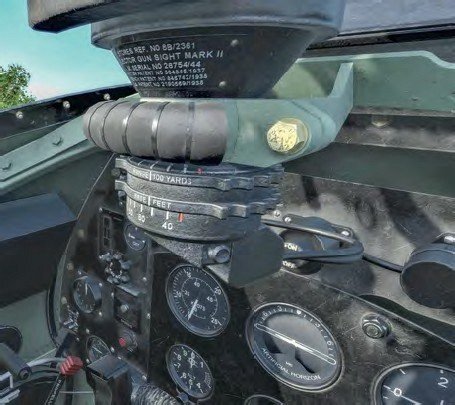 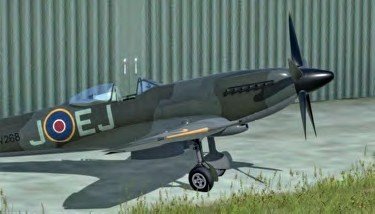 A selection of images of the new Supermarine Spitfire Mk XIV to be published by Orbx.

PC Pilot: We learned at the Flight Sim 2019 show, held at the RAF Museum Cosford, in the UK, that Orbx would, surprisingly, be publishing an aircraft: the Spitfire Mk XIV. Can you tell us a little about the project and how it came about?

John Venema: The Mk XIV is in development by Echo Papa Developments who (in a different guise) had previously_had their aircraft published for DCS and FSW. They approached us for a publishing deal and we’ve brought them ‘in-house’ to bring all their aircraft to market branded as Orbx products.

PC Pilot: Finally, can you share with our readers your development plans for 2020? Where do you think Orbx will be this time next year?

John Venema: We will be still growing, still adding staff, still creating new IP and also embracing whatever platforms the simming_community is using. As long as people want Orbx quality add-ons in their sims, we’ll still be creating stuff.

PC Pilot: Thanks John for taking time out of your busy schedule to answer our questions and we at PC Pilot wish you and your team the very best for 2020.