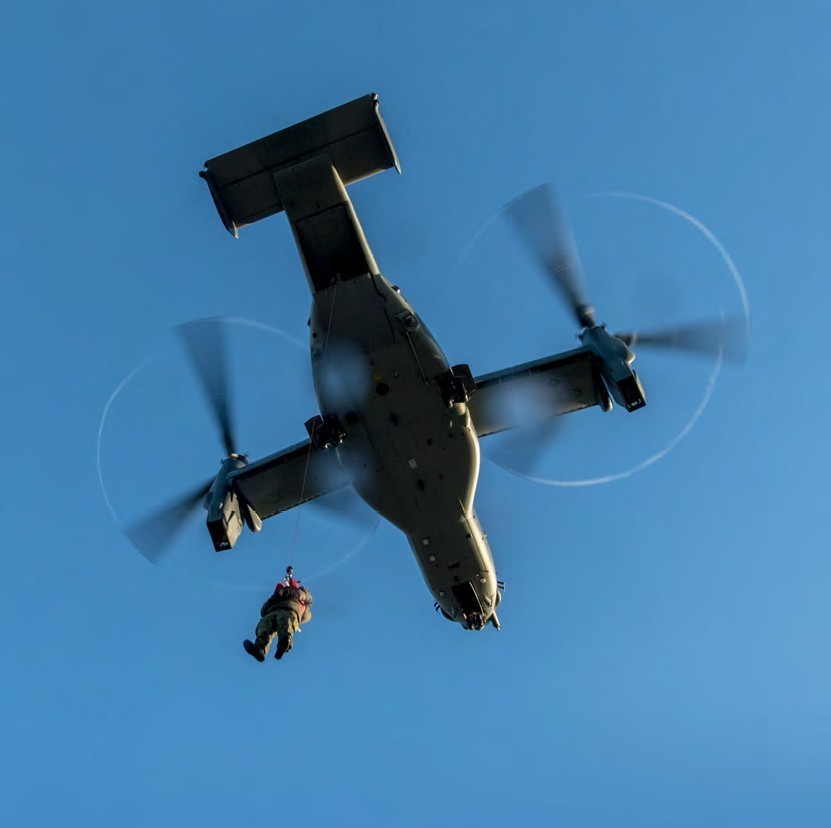 An Estonian soldier is hoisted up to a US Air Force CV-22 Osprey, assigned to the 352nd Special Operations Wing based at RAF Mildenhall, UK, during fast rope training.
SSgt Matt Britton/US Army

This year’s Farnborough air show will be an important one for the Bell- Boeing V-22 Osprey tiltrotor. At least one Osprey is expected to be flying at the show, operational requirements and government clearances permitting. The first international sale, under the US Foreign Military Sales (FMS) programme, is Japan’s procurement of 17 MV-22s in two batches. Japan’s procurement was a response to potential threats to its offshore islands. The first delivery is scheduled for next November.

This year, the US Department of Defense is expected to sign the third (and likely final) multi-year procurement (MYP III) contract for Osprey production, which will see completion of the planned deliveries to the US Marine Corps.

MYP III will add a further five years of production, enabling FMS customers to buy Ospreys for a pre-negotiated price based on economies of scale afforded by the MYP.

Over the life of MYP III, aircraft availability to international customers is planned at ten aircraft per year with more available based on the number of V-22s ordered.

The Israelis have also seen the effective use Air Force Special Operations Command made of its CV-22s supporting operations in Syria. Israel is considering making Ospreys part of a larger rotarywing procurement that will see procurement of new heavy lift helicopters from the United States. The United Arab Emirates was reportedly also interested in a small squadron-sized force of Ospreys, primarily for special operations, but any deal has been postponed as the fighting in Yemen absorbed a greater share of the United Arab Emirates defence spending and their armed forces’ capabilities.

However, the highest-profile Osprey buy would be an order from the UK to support its new Queen Elizabeth class aircraft carriers. Ospreys will land aboard HMS Queen Elizabeth (R08) later this year as part of the UK’s F-35B first-in-class sea trials.

Some F-35 F135 engine servicing has to be performed at centralised facilities ashore. How the British intend to sustain F-35 carrier operations – with or without Ospreys – has so far not been made public but remains a necessity.

Speaking at the Navy League’s annual Sea-Air-Space conference in Ann Harbor, Maryland in April, US Marine Corps Colonel Matthew Kelly, Naval Air System Command’s PMA-275 V-22 programme manager said: “We have had discussions with the UK and they are interested in the Osprey’s capabilities, including resupply for the Queen Elizabeth. A blue-water capability cannot be resupplied by a helicopter if up to 1,000 miles out at sea. The V-22 can get there when nothing else will.”

Likely to be of interest to the UK MoD is the investment made by the US Marine Corps in a tanker kit to enable its MV-22B Ospreys to support F-35B operations. In the longer term, the Marines are also looking at other mission payloads for the MV-22B that could provide radar, sensors, electronic warfare (including the Intrepid Tiger podmounted system), and weapons capabilities, based on the Harvest HAWK programme.

British interest – and that of other potential international customers – is enabled by the US Navy’s decision to procure 44 CMV-22B versions to meet its carrier onboard delivery requirement. Work on the first Navy Ospreys is starting this year, with the first deliveries scheduled in FY2020 and final deliveries in FY2024. Because the Osprey can carry the power module of a Pratt & Whitney F135 engine, the 40,000lbrated powerplant of the F-35, it is considered vital to enable F-35C carrier operations. David C Isby