Members of the 492nd FS, known as the ‘Madhatters’, in relaxed mood on the May Day Bank Holiday Monday during the heritage shoot with the P-47. Joining the Thunderbolt are an F-15C Eagle (left) of the 493rd FS, also part of Lakenheath’s 48th Fighter Wing, and a 494th FS F-15E.
GLENN STANLEY/COAP

Republic P-47D Thunderbolt 45-49192/G-THUN, now owned by Fighter Aviation Engineering, took to UK skies again on 4 May from Sywell aerodrome near Wellingborough, Northamptonshire. Pete Kynsey was at the controls. Having arrived back in Britain during April following its acquisition from the Millville Army Air Field Museum in New Jersey, the ‘Jug’ — which thus becomes the sole airworthy example of the type in Europe — was prepared for flight by Richard Grace and his team at Sywellbased Air Leasing.

As previously reported, G-THUN has been finished in the markings of the 48th Fighter Group’s 492nd Fighter Squadron, part of the 9th Air Force. It sports the code letters F4-J and the name Nellie. The 48th FG arrived in Britain during March 1944, being stationed at Ibsley, Hampshire. Its Thunderbolts were extremely active during the D-Day period that June, undertaking air-to-ground missions, as well as in the course of the liberation of the Netherlands in September. They flew from numerous bases in newly liberated Europe, supporting the advance of Allied forces. Two citations awarded by the Belgian government for the 48th’s activities over the Low Countries and a Distinguished Unit Citation reflected the extent of its efforts. Today, the 492nd FS is stationed at RAF Lakenheath, Suffolk, as one of three flying squadrons within the 48th Fighter Wing — successor to the wartime 48th FG — and flies the multi-role F-15E Strike Eagle. On May Bank Holiday Monday, 7 May, the 492nd staged a heritage and fundraising event at Lakenheath with the P-47 as its centrepiece. Apart from illustrating an important part of the unit’s history to its current personnel, the occasion generated money for the Air Force Assistance Fund, which supports four different charities providing assistance to USAF airmen and their families who find themselves in need. Joining the Thunderbolt was Anglia Aircraft Restorations’ Spitfire Vc EE602/G-IBSY, representing a type flown by many American pilots in the UK both in the RAF’s Eagle Squadrons and US Army Air Forces units. The historic fighters were flown in by Stu Goldspink and Richard Grace respectively. 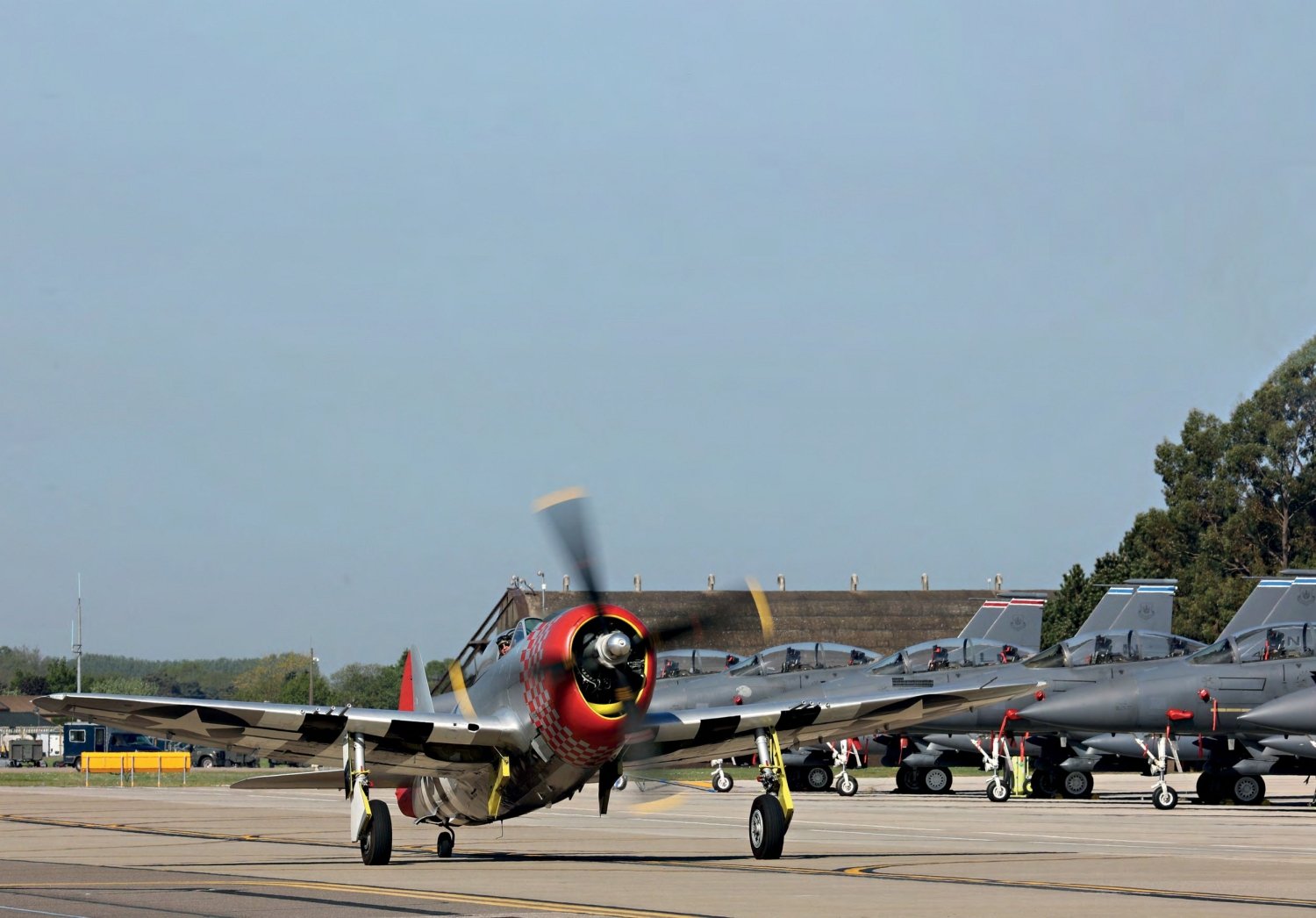 Stu Goldspink taxies on arrival in P-47D G-THUN for the heritage event at Lakenheath on 7 May, with F-15E Strike Eagles of the resident 492nd and 494th Fighter Squadrons (with blue and red fin stripes respectively) on the flightline alongside. The ‘Jug’ now wears the wartime markings of the 492nd.
GLENN STANLEY/COAP 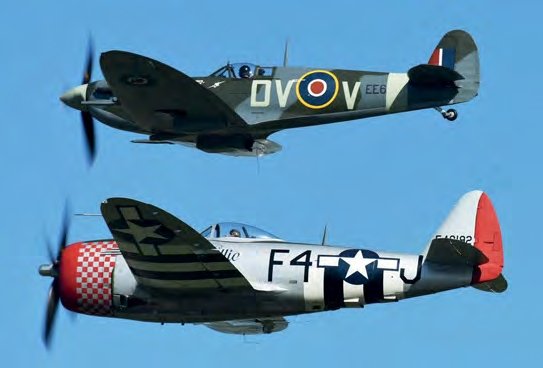 A flyby over Lakenheath by the P-47 in company with Anglia Aircraft Restorations’ Spitfire Vc EE602. USAF

Selecting a 492nd FS scheme for the P-47 creates a very pleasing link with the modernday USAF presence in East Anglia. Fighter Aviation Engineering’s Graham Peacock said, “It was very difficult to find any photographs of the squadron. We eventually found some bits of photographs, some of the front, some of the back, and we were able to put it together. [The aircraft] arrived two weeks ago from the States in a shipping container, so we stripped all the paint off it, repainted it in these colours, put it back together and flew it for the first time on Friday.”

G-THUN was last in the UK from 1986 to 2006, when it was operated by The Fighter Collection at Duxford in 78th Fighter Group/82nd Fighter Squadron colours with the name No Guts — No Glory! The 1945-built fighter served only briefly with the Army Air Forces, and for rather longer with the Peruvian Air Force, prior to its sale during 1969 into civilian hands. Registered N47DD, it went through the hands of numerous US owners until its acquisition by TFC. Fittingly, the P-47 will now be partly based at Duxford once again. It will divide its time between the Cambridgeshire airfield and Sywell, where Air Leasing will provide engineering support. 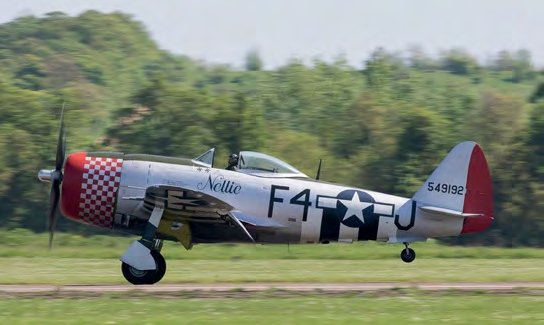 The Thunderbolt touching down at Duxford, its former home and now — in part — its current one.
MIKE SHREEVE

The aircraft made its return to the UK airshow circuit on the weekend of 19-20 May, when Stu Goldspink piloted it at the new Midlands Air Festival staged at Ragley Hall, Warwickshire. A busy programme of appearances is planned for the summer. Ben Dunnell