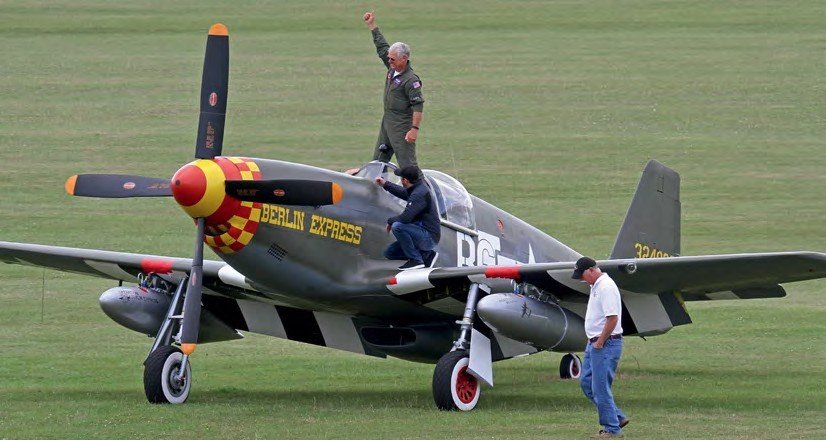 Lee Lauderback celebrates the end of his trans-Atlantic flight in P-51B Berlin Express at Duxford on 4 July.
DAVID WHITWORTH 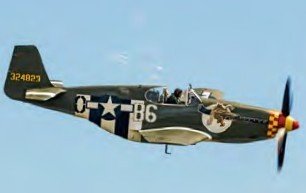 The fighter, recently acquired by Houston-based Comanche Fighters from Max Chapman, is painted as 357th Fighter Group P-51B Berlin Express flown by Capt Bill Overstreet from Leiston, Suffolk during 1944. The restored Mustang is based on parts of a 363rd FG machine from Staplehurst, Kent, which crashed on 10 June 1944 at Beckley, East Sussex during a training exercise, the pilot surviving after taking to his ’chute. A rebuild was started during 2012 at Pacific Fighters in Idaho Falls, Idaho, from where company founder John Muszala took it for a first flight on 7 November 2014. The P-51B is fitted with a ‘Malcolm hood’, and is the first P-51 to feature this canopy to be seen in Britain since shortly after the war.

Unfortunately, the hood didn’t last long during N515ZB’s display at Duxford on 8 July, the opening day of the 25th Flying Legends show. Shortly after pilot Nick Grey began his first flyby, the canopy Perspex shattered, causing some light damage to the tail. The Mustang sat out the rest of the weekend, and missed the Royal International Air Tattoo.

Lee Lauderback has some 9,750 hours on the P-51, 25.5 of those on the Berlin Express trans-Atlantic flight. An ‘Aeroplane meets…’ article with Lee begins on page 62.