Our full and comprehensive review starts on page 12. We have a high quality trailer for you that shows off the awesome capability of this awe-inspiring aircraft.

Now that IPACS’ Aerofly FS 2 is out of ‘Early Access’, we decided to give it a full appraisal starting on page 20.

This accompanying video conveys not only the high graphic quality of the default aircraft, but also the high resolution detail and textures of the simulation’s surrounding landscape and airports.

We briefly covered MilViz’s FG-1D Corsair, designed exclusively for Prepar3D, in the news section of our previous issue.

Now you can read our full and detailed assessment of what we think of their rendition of one of World War Two’s most iconic and distinctive-looking aircraft. This promotional presentation highlights the extensive work that has gone into this truly feature-rich simulation and covers such things as the 3D graphics, cockpit lighting, weapons modelling and more.

As we reported in our previous issue, Team Fusion (TF) was working on an extensive overhaul of IL-2 Sturmovik Cliffs of Dover: BLITZ.

This has now been released and we have an exclusive interview with Neil Pugh - head of marketing and publicity for TF, who has kindly given us a detailed insight into the project and the process involved in developing this major update. The team has produced an atmospheric and exciting video of CoD: ‘BLITZ’ which really highlights some of the new features of this work. Look out for the new special effects, improved landscapes and cloudscapes, the new Beaufighter, new winter terrain, tree collisions and much more.

In this issue we put the spotlight on a particular aircraft – the MilViz DHC-3 Otter.

Not only will you be able to read our review of this release, starting on page 52 but we have also featured it in our ‘Challenging Airports’ (page 56) and ‘Flight Adventure’ (page 60) series. The aim is to give you a better appreciation and understanding of the simulation and the aircraft’s qualities and capabilities. This video highlights some of the product’s main features. (By the way, watch out for the Squirrel at the beginning.)

The following practice and training missions for the AV-8B were kindly supplied by avid simulator pilot, gamer and animator/3D artist, RedKite.

The missions are for DCS v1.5.8 and come with different spawn points for practicing various scenarios.

The training mission can be downloaded from the following link:

This issue, we complement Chris Frishmuth’s review of the MilViz DHC-3 Otter by taking it for a bush pilot wilderness flight adventure through the Copper River region of Alaska.

The route takes us from Cordova/PACV, north up the Copper River to visit some settlements, before returning via Klutina Lake and Thompson Pass. These flights are pure VFR – no flightplans, no ATC – just you, your aircraft and the Alaskan wilderness! Peter Stark has kindly provided additional Pilot Notes, optional flights, charts etc.

Once again we have a collection of high quality freeware files for you to enjoy. These aircraft, scenery and utilities easily compare with many commercial products but don’t forget, if you’ve enjoyed a particular file please let the author know. It’s their only payback! By the same token we’re always interested to hear from you if you’ve downloaded or designed a file that you think is worth sharing.

Although the authors of these files have very kindly given us their permission to include them on our website, they still remain the property and copyright of the authors. You are free to enjoy them for you own use but they must not in any circumstances be distributed, copied, uploaded to any other websites or disassembled in any way whatsoever.

With this issue we step aboard a modern jet fighter in the form of the sleek Eurofighter Typhoon. The Typhoon is manufactured by a consortium of Deutsche Aerospace (Germany), Alenia Aermacchi, Airbus and BAE Systems. It was originally designed as an air superiority fighter even though later production aircraft were increasingly better equipped. It was able to undertake air-tosurface strike missions and carry a greater range of munitions than originally envisaged. Some military aircraft are purely functional and look more like flying trucks than aircraft. And I suppose it could be said that what they look like is totally irrelevant, but I believe the Typhoon, like the F-16, is a beautiful aircraft and a credit to its designers.

You can elect to carry a variety of ordnance. 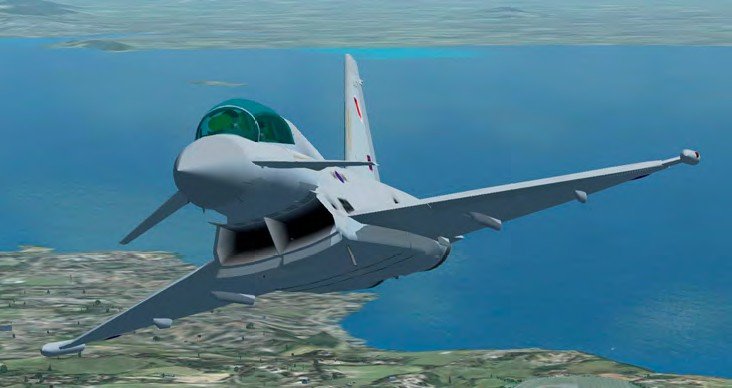 The external modelling is first class. 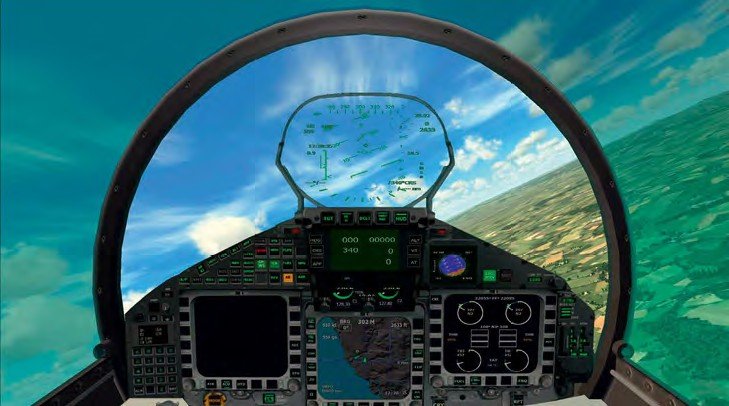 Lots of detail and a working HUD within the cockpit.

The model shown here was designed by Dietmar Loleit and, like its real world counterpart, is quite a complex machine, so if you’re expecting a ‘punch-the-starter-andgo’ type of aircraft, you’ll be disappointed. That’s not to say it’s overly complicated, it simply means that the author has tried to make the simulation as realistic as possible. To help with this there’s a very comprehensive manual, (over 70 pages) with full instructions on the installation and how to manage all the onboard systems. It’s a commendable undertaking for one person, particularly with the unique features the author has included.

The package includes the aircraft model in single-seat and two-seat configurations with a virtual cockpit (VC) and a 2D panel. I’m told it was designed and developed according to the technical documents, descriptions and pictures currently available. 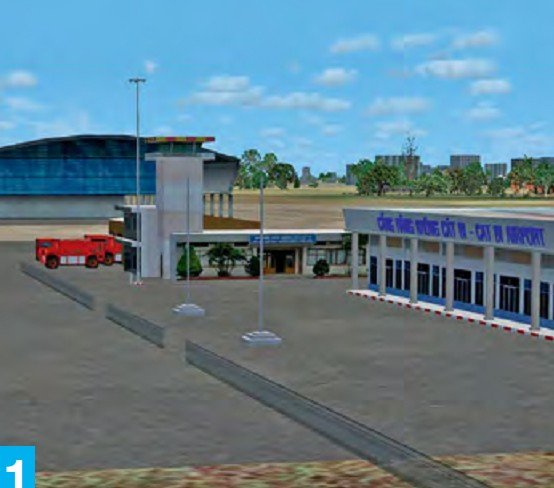 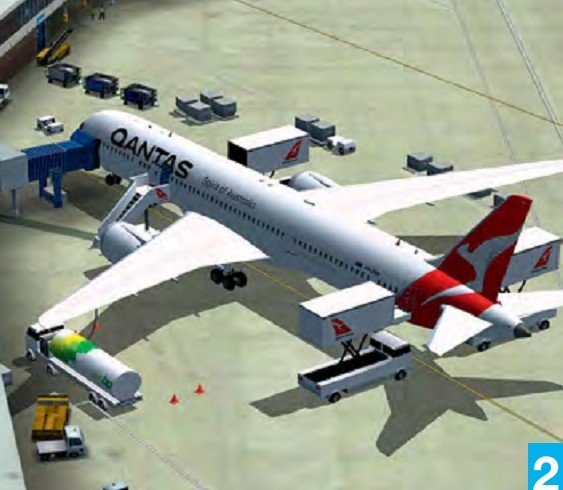 Camil Valiquette is no stranger to this section of the magazine. He has created many fine aircraft in the past. In this issue we have his latest Boeing 787-9; a new jetliner in the Quantas livery. It includes CamSim’s own static displays and Animated Ground Servicing. 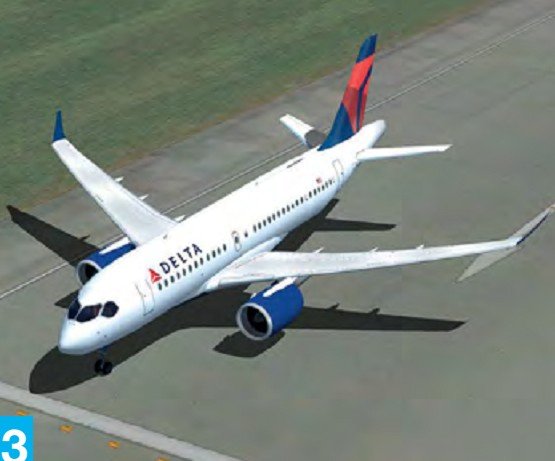 Here we have a new passenger jet built from scratch by Hongming Zheng. It depicts the Bombardier CSeries CS100 aircraft and includes the liveries of Swiss HB-JBA, Test Aircraft FTV1 C-FBCS, and Delta Air Lines. 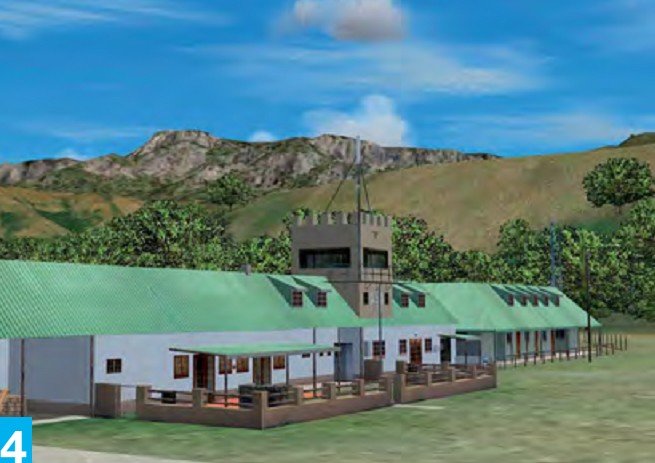 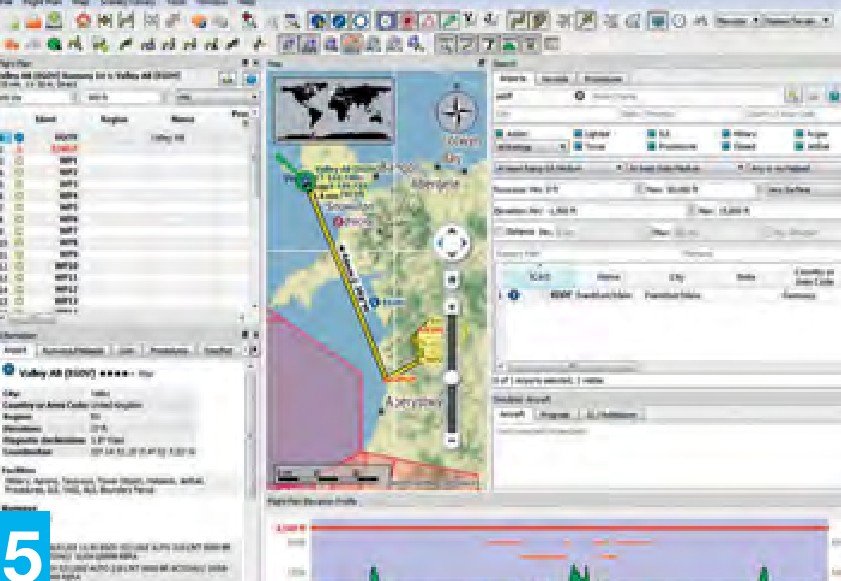 This is a new release of Little Navmap, where the database can be updated by Navigraph. The author has also included a cycle 1707 base dataset in the download which was kindly granted by Navigraph. 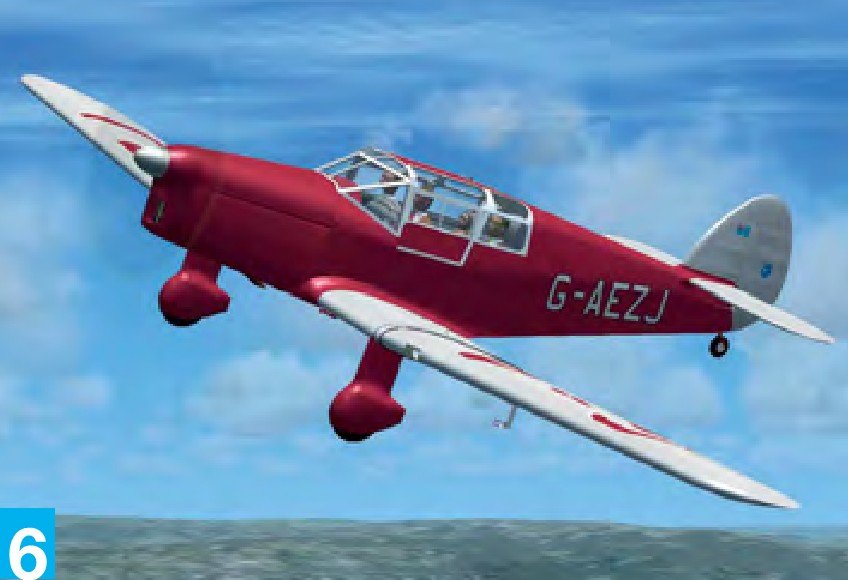 Keith Paine created this model of the Percival K2 Vega Gull. It’s a logical development of the Percival D3 Gull. The Vega Gull was enlarged to accommodate four people in a side-by-side arrangement. 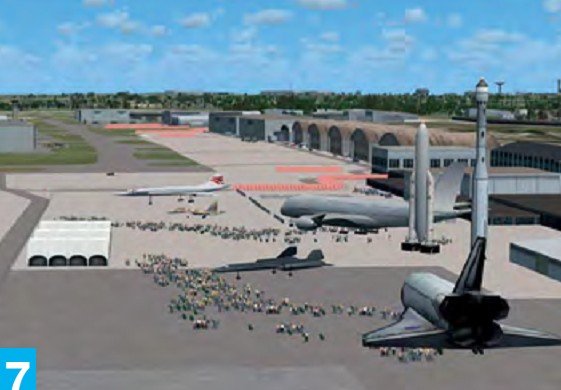 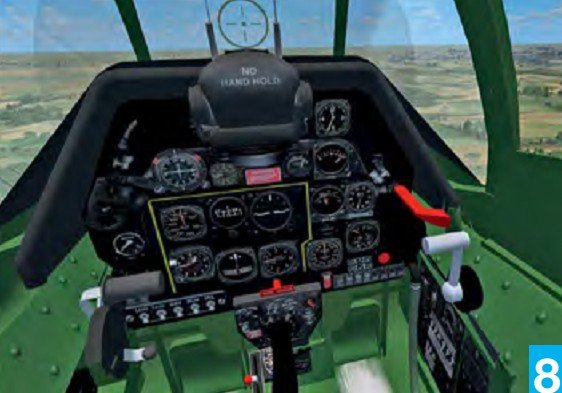 The ultimate version of the Mustang was the P-51H. It was the fastest variant to see service. It was also one of the fastest piston-engined fighters to enter production during World War Two. The fine aircraft presented here was designed by AF Scrub.